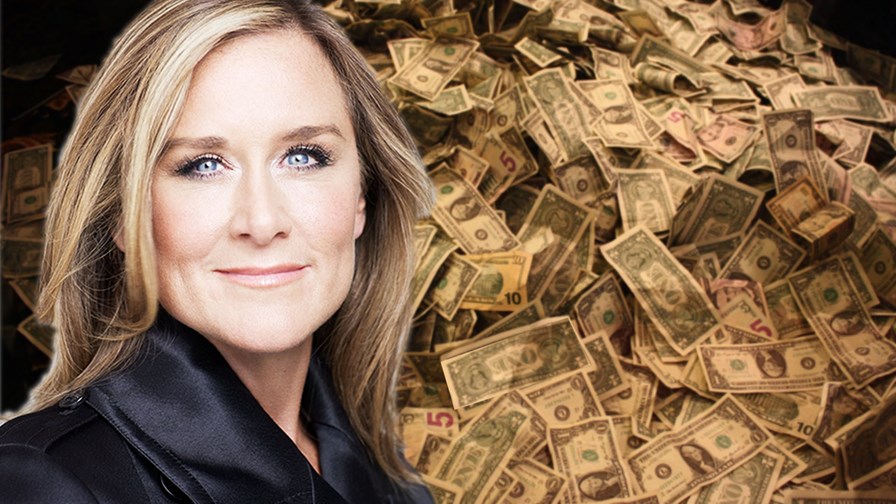 Listeners to the venerable BBC radio programme "Woman's Hour" recently voted Angela Ahrendts, who was CEO of the fashion brand Burberry at the time, Number Nine in the show's "100 Power List". Armed with the accolade she's now upped sticks and returned to the US to take over Apple's retail business.

Apple has welcomed her with open arms and a share options award that will net her $68 million over four years. I wonder how many Burberry trenchcoats and headscarves that will buy? And then of course there's her salary for actually doing the job. We don't know what it is yet because Apple isn't telling.

Ms Ahredts has been awarded 113,334 Apple restricted stock options in a "golden hello' of considerable magnitude. The first tranche of this award, worth $9.8 million, vests in just over four weeks time on June 1. With Apple's share price at a new all-time high (it is now above the previous record high of $600 a share) it is, quite literally, money for nothing. She won't even have to trade in a couple of metres of old Burberry rope to get her hands on the cash. Nice work if you can get it - and she has.

Angela Ahrendts is credited with rejuvenating the stagnating Burberry brand and making the label a "must have" for the emerging wealthy in emerging markets - particularly in the Far East. Her skills and vision probably save Burberry from falling into irrelevance and possible disappearance and she was very highly valued there.

However, she has been coaxed away to run the 483 minimalist shrines to over-priced high-tech gizmos that are the Apple shops. (And I write that as an Apple aficionado). She departed London with a £9 million payoff in her Burberry purse having been allowed early access to share options and bonuses of £6.2 million as well as receiving a cash bonus of £2.1 million and her last month of workaday salary of close to million pounds a year.

Ms. Ahrendts is also now in charge of Apple's online retail presence and she is not the first to transfer from Britain to the job. John Browett, the erstwhile boss of UK High Street technology chain Dixons, was also once head of Apple retail. He lasted six months.

It is to be hoped that the new one will do better. In an email sent to all Apple staff, company CEO Tim Cook s descried 53-year-old Ms. Ahrendts as "wicked smart". She'll have to be.

Apple still leads the field but challengers aren't that far behind. Apple needs someone with the vision to carry through an innovative strategy and revamp the company's retail presence to capture new customers (especially in China where Apple has plans to increase its presence threefold over the next two years) without alienating customers who have been loyal to the Apple brand through thick and thin.

On the products front, the Apple iPhone continues to do remarkably well but sales of iPads are slipping - and so are revenues. Meanwhile some analsyts believe that Apple has been content to rest on its laurels for rather to long and has introduced a series of incremental improvements to existing products rather than launch ground-breaking new ones.

After all, the iPad is now four years old and rumours about the iWatch and other devices have been swirling for almost as long. No doubt there is much R&D work going on behind the scenes and Apple will surprise us all again in due course - but if a week is a long time in politics, four years is countless aeons in high-tech consumer products.

Growth at Apple's physical stores has slowed. Apple's 2013 figures show that retail sales were up by 7 per cent over the year whilst they rose by 33 per cent in 2012 and 44 per cent in 2011. Obviously something needs to be done. Apple is betting that Angela Ahrendts is the person to do it.