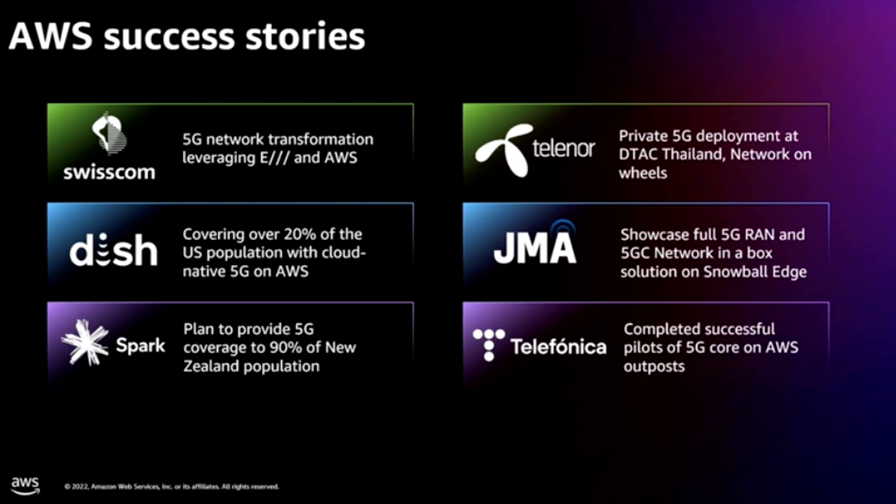 Amazon Web Services (AWS) has brought the curtain down on its annual re:Invent gathering, this year held in Las Vegas, and among the hundreds of sessions, presentations and announcements that were packed into its few days, the hyperscaler’s expanding relationship with the telecom sector was one of the highlights.

Las Vegas was, of course, the initial launch market for Dish Wireless’s 5G service and greenfield Open RAN-based network, which relies heavily on AWS as the host platform for its radio access network software stack and other virtualised functions. Dish was one of AWS’s partners that rocked up to Vegas this week, along with technology partners such as Cisco, IBM and Totogi, in an effort to court application developers with its API strategy and develop hub.

AWS also hosted a presentation devoted to the challenges and opportunities associated with running virtualised cloud-supported 5G networks, with Swisscom’s executive VP of mobile network and services, Mark Duesener, as a guest speaker – you can watch that session here. AWS describes Swisscom as a “flagship” customer that is using AWS for its internal and customer-focused activities in the consumer and enterprise sectors. The Swiss operator expanded its relationship with the hyperscaler in May this year.

AWS used that session to boast about a number of its network operator engagements with the likes of Spark, Telenor and Telefónica as well as Dish and Swisscom – see the slide above.

And during the past few days, various other network operators and communications industry technology developers have been sharing how they’re working with AWS.

T-Systems, the enterprise-focused division of Deutsche Telekom, announced an external security key management service that will use AWS cloud to authorise and manage access to data on behalf of its customers. T-Systems will create and store encryption keys in its EU-based datacentres, outside of AWS infrastructure, as part of the service. This will enable organisations in the EU to “benefit from the security, speed, innovation and breadth of services AWS offers, combined with the confidence that best practices for data protection in the cloud are adequately implemented,” noted T-Systems.

Vodafone announced an edge innovation lab in Manchester, UK, that is underpinned by a distributed mobile edge computing platform deployed in partnership with AWS. The cloud giant announced the general availability of AWS Wavelength (embedded AWS compute and storage services) on Vodafone 4G/5G network in Manchester in early November.

“We’re driving innovation for smart buildings and smart agriculture by introducing new devices and applications, and now we have a more reliable way to get data from point A to point B,” noted Bill Britton, Cal Poly’s vice president for information technology services and CIO. “Federated Wireless and AWS are giving us the 5G backbone to make the digital campus a reality,” he added.