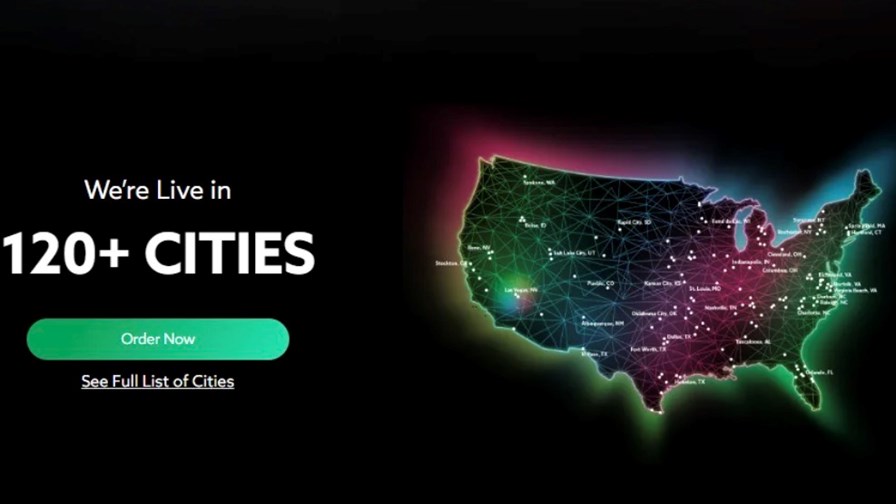 With only hours to spare, Dish Network managed to hit its 5G launch deadline, with the operator claiming to have launched services in more than 120 cities across the US. The US 5G newcomer had until the end of Tuesday to make its service available to one-fifth of US citizens in order to meet the obligations of its Federal Communications Commission (FCC) licence.

“As of June 14, Dish is offering 5G broadband service to over 20% of the US population,” the company noted in a press release issued today (15 June). “This marks a major milestone in building the world’s most advanced cloud-native 5G Open RAN network, as Dish continues to change the way the world communicates,” it added.

"This is a big moment for Dish as we connect customers across the country with America's first and only cloud-native Open RAN network," stated Dave Mayo, executive vice president of network development at Dish Wireless.

"This milestone was achieved through the collaboration, ingenuity and hard work of the Dish team and our numerous partners, including AWS, Cisco, CommScope, Dell, Fujitsu, Intel, JMA, Mavenir, Nokia, Oracle, Palo Alto, Qualcomm, Samsung and VMware. We're the only major network in the world built primarily with American vendors," added Mayo, seemingly aiming to appeal to patriotic US citizens who might be tempted to switch from AT&T, T-Mobile US or Verizon to the Dish 5G service.

Hitting the deadline was a close thing: Until Tuesday the only market where Dish’s 5G service was available to the public was Las Vegas. But late yesterday the company updated the website for Project Genesis (the name assigned to the rollout and launch) to note that the service was now available in more than 120 cities. At around the same time, Stephen Stokols, CEO of Dish-owned Boost Mobile, tweeted: “Access to the most advanced 5G network in the world officially live in over 120 cities today”.

The Dish share price reacted accordingly: Having lost 3.6% of its value during trading hours on Tuesday, news that the 5G service had been launched within the FCC deadline gave the stock a 5.1% boost in early trading on Wednesday to take it to $18.49.

The device options for customers are quite limited initially: The Samsung Galaxy S22 and the NetGear 5G hotspot are on offer in all markets where the service has launched, while customers in Las Vegas can also use the Motorola Edge+ smartphone, which will be rolled out by Dish to more markets in the coming months. The unlimited service costs $30 per month, or just $20 per month to use only the hotspot device. For further details about service availability and features, see this announcement.

So Dish has launched, at last. But that’s just the first big step. Now it has to compete with its heavyweight incumbent rivals on price, service quality and reach, and customer service.

It is also operating in what is largely an unknown and untried telecoms environment: Dish’s network is a greenfield Open RAN architecture with much of the functionality running on Amazon Web Services (AWS) platforms. By contrast, the world’s flagship greenfield Open RAN network, Rakuten Mobile’s 5G deployment in Japan, is running on the company’s private cloud platform, and the 1&1 greenfield Open RAN-based 5G network currently being rolled out in Germany (supported by Rakuten Symphony) will also rely on the private cloud platforms of parent company Drillisch.

Dish is an industry first, and will be closely scrutinised to see if it can match, exceed or fall short of the service levels on offer from its rivals.

And that, of course, can only really be determined once the Dish 5G customer base hits any kind of scale, and it is scale that will be needed if it’s to be viable in the medium and long term.

Now the service is seemingly available, the Dish marketing machine needs to ramp up and attract users. Social media will no doubt give us an idea soon about whether the great Dish Open RAN 5G gamble might pay off.... no wonder it launched first in Las Vegas.