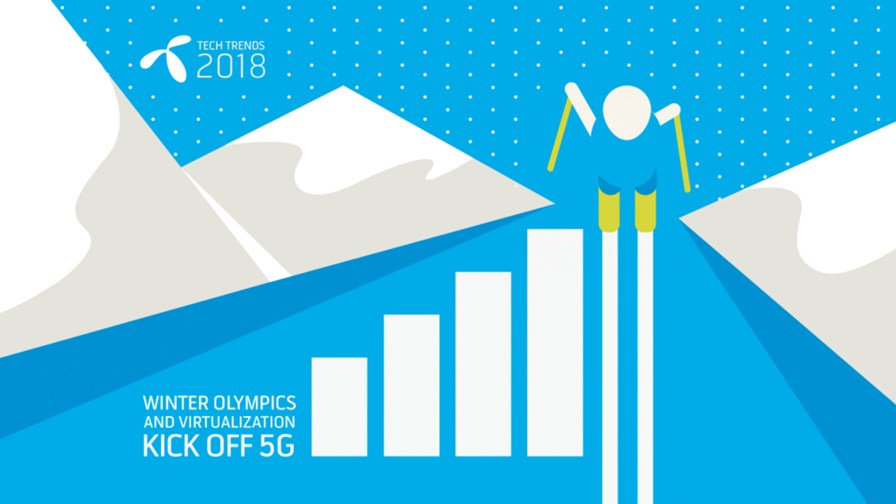 ‘Tis the season for technology predictions and warnings of imminent disruption to all, and whilst we at TelecomTV tend to ignore most of them (and we get dozens from November onwards…) occasionally we just can’t resist. Earlier this week, we wrote about the Economist Intelligence Unit’s warning that telcos face a perfect storm of differential pressures. Now it’s time to find out what the telcos think, or at least one of them, Norway’s Telenor (small, but perfectly formed).

2018 will be the year when many of last year’s “new big things” – such as self-driving cars, AI, Big Data and cryptocurrencies – actually start to appear in the market, says a team of scientists and technology analysts at Telenor Research. Yes, there will be consumer-centric trends such as facial recognition, on-demand services and 360-degree photos, but what about the broader technology trends?

“When big changes happen it is often because regulation, user preference and technology converge – mobile telephony is one example, the car another,” explained Bjørn Taale Sandberg, Head of Telenor Research. “2018 will see key developments in all three dimensions. We have picked the trends that we think are both illuminating and important to stay on top of ahead of the New Year.”

Telenor believes 2018 will be the year when deep learning moves beyond the hype and finds new markets outside of the Internet web-scale companies. The technology will take on a wide range of industries, including health, energy, transport and of course telecoms. It cautions that success will come from well-understood use cases, ample quantities of the all-important training data, and having sufficient skills and knowledge to train models – equally, failures will come from misunderstood use, mismanaged expectations on deep learning’s capabilities, and the incorrect assumption that deep learning is a commoditised tool that can be bought off the shelf and not developed from within the company.

Going off on a tangent here… research company Gartner believes we will have to wait a couple of years until 2020 before we reach the pivotal moment for AI-related employment dynamics, when it will become a positive job motivator, reaching an estimated 2m net new jobs.

“Unfortunately, most calamitous warnings of job losses confuse AI with automation, that overshadows the greatest AI benefit – AI augmentation – a combination of human and artificial intelligence, where both complement each other," said Svetlana Sicular, research vice president at Gartner. “IT leaders should not only focus on the projected net increase of jobs. Now is the time to really impact your long-term AI direction.”

By 2022, Gartner believes one in five workers engaged in mostly non-routine tasks will rely on AI to do a job. It adds that by 2021, AI augmentation will generate $2.9 trillion in business value and recover 6.2 billion hours of worker productivity. We’ll see.

2018 is a make or break year for Blockchain, with Telenor warning that it must break out of its own cryptocurrency cradle. Whether or not it can is a moot point. Telenor says the problems are stacking up, and this year we may see blockchain technology struggle to break free of its current focus on currency (as the technology behind Bitcoin).

A blockchain is a continuously growing list of records, called blocks, which are linked and secured using cryptography. Each block typically contains a hash pointer as a link to a previous block, a timestamp and transaction data. One of the attributes of blockchain is that it is, by design, resistant to modification. However, this also brings about the challenge of diversifying its practical applications – to create more varied and usable blockchain-based solutions, developers need to be able to modify it, resolve bugs, upgrade technology and make widespread engineering decisions.

“The point of blockchain is that it avoids the need for a central governing body to oversee its transactions,” said Sandberg. “This is known as the ‘blockchain governance paradox’. The blockchain industry will need to resolve these challenges to fully deliver on its promise. 2018 will see this debate heat up – and hopefully give us solutions.”

As with its neighbouring Nordic countries, Norway is far more interested in the Winter Olympic Games than the Summer ones, so no surprise that Telenor is getting excited about the PyeongChang games in South Korea in February. But if hurtling down steep slopes on thin strips of polymer whilst clad in body-hugging lycra isn’t your thing, there’s an added frisson of excitement this year as the Games will provide us with a sneak peak of 5G.

In addition to seeing the development and testing of advanced technical features, Telenor also expects to see real-life use cases demonstrated, such as 5G-linked drone equipment following ski jumpers through the air, and views of the slopes from different 5G-connected vantage points.

“Sneak peeks of 5G technologies like these will provide new knowledge on how 5G can be used to empower vertical industries and give us more answers on 5G performance. 2018 will be the year when history says 5G was launched,” said Sandberg.

Intel will be one of the companies to watch, as it is a worldwide sponsor partner for the Games, and the company has already given us a glimpse of how it will help showcase 5G at the event. Obviously, local operators KT, SK Telecom and LG U+ will doubtless be using the event to promote their various 5G efforts.

And a sneak peak of our own – make sure you pop by our website next Friday 22 December, as we’ll have a very special and exclusive 5G-related announcement…

And in other news…

Rounding up the rest of Telenor’s predictions, we’ll start with social media. It believes social media newsfeeds will become less ‘social’ and more ‘media’ as evidenced by Facebook users posting less and giving way to an increasing amount of professional and paid content – of varying relevance. Add ‘fake news’ into the mix and might we now see users turning to other platforms for news, to curate their ‘digital presence’ and get updates on friends and family? Debatable; but all the while Facebook continues its expansion into messaging.

Augmented reality: “Though no mass market relaunch of Google’s AR glasses are on the immediate horizon, we should see a surge in the number of apps with AR in 2018,” said Sandberg. He adds that with its latest version of the iPhone operating system, Apple has built-in support for augmenting whatever the phone’s camera captures with additional information. This means that much of the complexity is removed for programmers and AR then gets to be within reach for hundreds of thousands of iOS app developers.

Next, the mobile wallet and the introduction of new device payment systems, such as IoT banking based services in Asia. In Europe, 2018 sees the introduction of the new Payment Service (PSD2) directive (see TelecomTV’s recent coverage of IoT and Banking here), which enables access to banks’ customer data for the new breed of FinTech start-ups. This paves the way for ‘open banking’ and innovation, said Sandberg, as well as challenges within current business models and the telco payment ecosystem. As ever, security will be key.

And finally, one for the “I don’t think so!” category – although we would love to be proved wrong. Telenor believes that people will actually read online Terms and Conditions. What? There’s logic to the argument though, as in mid-2018 the EU will update the General Data Protection Regulation (GDPR) in several significant ways. The regulation strengthens the protection of our usage data, aiming to give control back to us private users, as well as changing how companies ask for your permission to use your data. Consequently, T&Cs must be reinvented so that consumers know what data they give away and for what purpose.

“This reinvention is key and we are going to see a lot of variations around Terms and Conditions in the beginning,” said Sandberg. “New Terms & Conditions are coming to your favourite app – and you’ll want to read them.”. Maybe.

But before we end our predictions round-up, allow TelecomTV to be so bold as to add another area to watch for in 2018 – zero touch automation. We’ll be giving it some serious coverage over the next twelve months, in addition to our ongoing coverage of SDN, NFV and orchestration.