Vodafone UK switches to fresher AIR for its 5G rollout 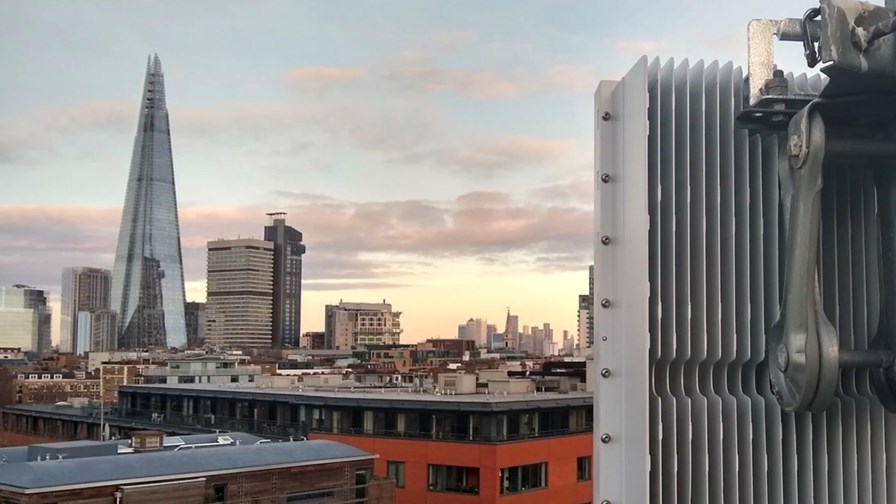 As part of its ongoing efforts to build a more environmentally-friendly 5G network, Vodafone UK is now deploying a new antenna-integrated radio (AIR) solution from Ericsson that is much lighter and less power-hungry than its predecessor.

The new unit is the AIR 3227, which has been deployed in a trial location in central London (Vodafone’s ‘Speechmark’ site, pictured above) and will now be followed by a further 1,500 radios by April next year. According to Vodafone, the 32TR (transmit/receive) unit, which has beamforming and multi-user MIMO functionality, is 51% lighter – making it easier, quicker and therefore more cost-effeicient to install – and consumes 43% less energy (up to 55% less during off peak times) “in direct comparison to previous generations of radio technology.”

The comparison is with the 64TR antenna units from Ericsson that Vodafone has been rolling out so far, which are very heavy (about 60 kilos) and less energy efficient, noted Vodafone UK’s Head of Performance and Radio, Ker Anderson, at a media briefing earlier this week.

“Vodafone is looking for ways to deploy 5G in a more energy-efficient way. When we started rolling out 5G we were using a 64-by-64 [64TR] panel from Ericsson and it’s close to 60 kilos in weight and burns electricity for fun,” noted Anderson, who added that the new AIR 3227 unit, while on paper having half the capacity of the 64TR units, “performs just as well... two years of technology evolution means we can now get the same performance from a 32-by-32 that we got with the first generation 64-by-64. Plus, they're half the weight, and we've got a 43% energy reduction. So it's been a real godsend for us for this product to come along and it's the right thing for us to deploy – it's cheaper, it's faster, burns less electricity and the performance is really, really good,” he added.

It would, though, be counterproductive to swap out the already-installed, more power-hungry 64TR units with the new AIR 3227s. “From a network performance and 5G rollout point of view, we need to keep going, otherwise we could spend a year-and-a-half refitting what we've already built and make no progress,” said the Vodafone man, who believes that some other operators that rushed out their 5G networks with early 8TR radio units are “possibly going to regret that” because they will need to replace those before too long. “We made the decision to go future proof from the beginning, which means that [the rollout pace is] slower. But, you know, I don't think 5G is a game of who rules out the fastest.”

The reduction in energy consumption is a very important metric because environmental responsibility is very high on the operator’s list of considerations for everything it does because it also leads to greater overall efficiencies, according to Anderson. In rolling out 5G, which Vodafone UK now has available in 150 towns and cities, “we need to be responsible, not just from an environmental point of view but also from a business point... that costs are kept under control,” noted Anderson.

And the operator’s utility bills are significant: Vodafone UK spends tens of millions of pounds per year on electricity and 90% of its total power consumption is network-related, so anything to cut back on power consumption helps to reduce the operator’s operating costs as well as being environmentally friendly and helping the carrier to meet its sustainability goals. (See Vodafone powered solely by renewable electricity in Europe.)

Anderson says the mantra at Vodafone is that every decision, every step taken in network planning and building, needs to be looked at from an environmental viewpoint because only by considering the impact at every step will any concrete results be achieved.

And in a Vodafone UK statement published earlier this week, that sentiment was echoed by its Chief Network Officer, Andrea Dona, who noted: “ There is no silver bullet for managing network energy consumption – it is about putting sustainability at the heart of every decision and adding up all the small gains to make a material difference.”