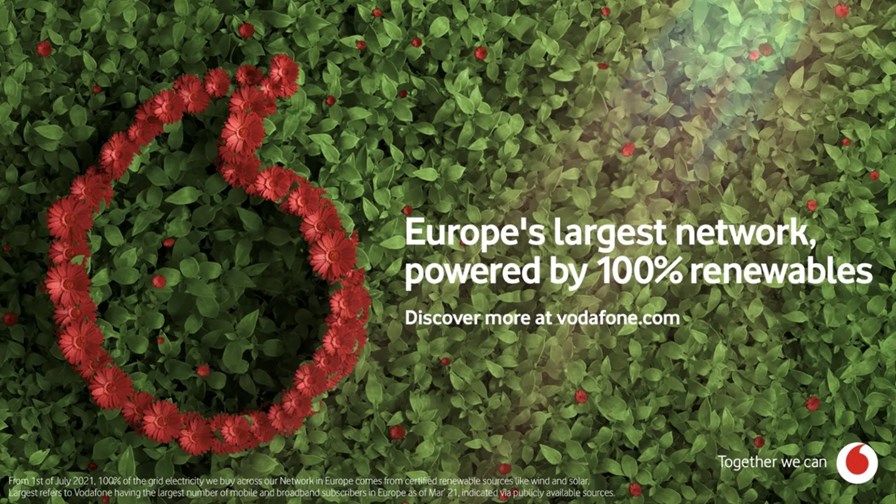 In a week's time, all the electricity Vodafone uses to power its operations in Europe will come from renewable sources.

The operator group has announced it is on track to hit its 1 July target to be 100% powered by electricity from renewable sources across Europe, a target it brought forward this time last year, having previously been shooting for 2025. It really does mean its entire European operations too: mobile and fixed networks, data centres, retail outlets and offices are all included.

To add further context, Vodafone noted that 96% of its total energy use in the 2021 financial year to the end of March came in the form of purchased electricity: As a result of its efforts, all of its purchased electricity in Europe – including cases in which Vodafone is a tenant on other landlords' sites – will now come from renewable generation sources such as wind, solar and hydro. (In the interests of full disclosure, Vodafone said it is using wholly renewable electricity in all its European markets aside from Albania, where the figure is 67%, but it is offsetting the remainder through the purchase of renewable energy credits, or RECs, in Italy.)

In addition, and possibly even more importantly in the current climate, Vodafone commented on its total energy usage, which it says remained flat in the most recent financial year compared with the one before, despite a hefty increase in volumes of mobile data traffic. It did not disclose details of its actual energy usage, but noted that data traffic was up by 47% to 11,714 petabytes in FY2021. Analytics and more efficient mobile technology, such as Massive MIMO, have kept energy use down, Vodafone said.

The telco has spent €65 million on energy efficiency and on-site renewable projects in the past year, leading to annual energy savings of 135 GWh. As well as using more efficient network kit, these initiatives have included switching off 3G networks and decommissioning legacy equipment in the core.

There's a business angle here too, of course; lower energy usage should mean lower bills, which is pretty important when you consider the scope of most operators' cost-saving initiatives. This time, though, Vodafone's announcement is all about the environmental impact.

Some additional highlights include Vodafone's pledge to switch to renewable electricity across Africa by 2025; reduce its own carbon emissions to net zero by 2030 and across its entire value chain by 2040; and reuse, resell or recycle 100% of its network waste by 2025.

Whether or not it hits its targets, it's clear that environmental initiatives are now a big deal to telecoms operators – they are no longer paying lip service to the green agenda.