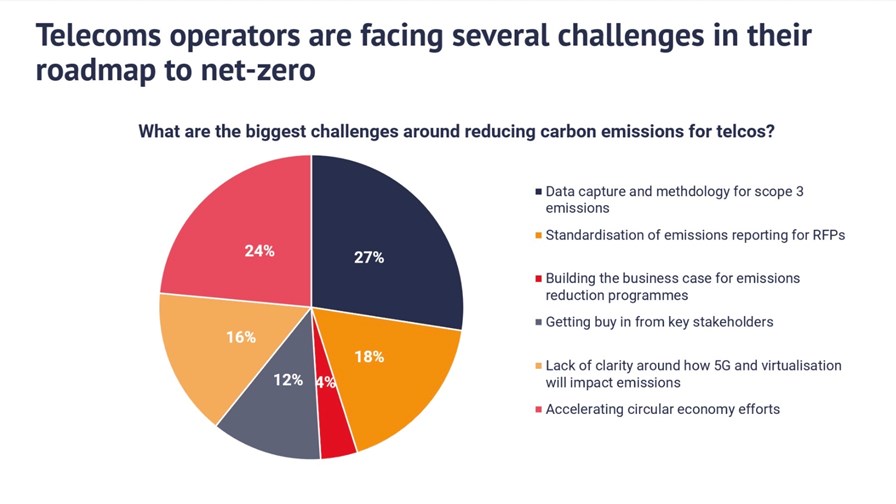 The biggest challenge on operators’ pathway to a net-zero future is the lack of clear methodology for their suppliers to report carbon emissions, according to analysts from telecoms consultant STL Partners, who have stressed the need for telcos to collaborate much more if they are to tackle value chain hurdles.

During a webinar presentation, the company shared findings based on discussions it held with 40 telecom operators worldwide regarding their sustainability efforts. It discovered the main challenge to improved environmental sustainability is around data capture and methodology for Scope 3 emissions (indirect, produced within the value chain).

“That’s difficult because you’re depending on all of your partners and suppliers across your entire value chain to report – and many companies are not reporting this very well yet,” noted Amy Cameron, principal analyst at STL Partners.

In fact, Scope 1 emissions (direct, made by the company’s facilities, fleet, etc) and Scope 2 emissions (indirect, covering the purchase of electricity for the company’s own use) were found to constitute around 20% of telecom operators’ carbon footprint, while emissions produced in the supply chain (Scope 3) serve as the biggest contributor to environmental pollution.

According to the company, there is a need for telcos to express their sustainability demands when working with suppliers. “One key thing is having really strict stipulations on suppliers, making that part of the decision-making process and framework when it comes to selecting partners you would work with, instead of it just being around cost,” recommended Grace Donnelly, senior consultant and sustainability practice lead at STL Partners. Another option is for telcos to stipulate that 20% to 30% of a contract be based on whether the supplier can provide transparent reporting on their own emissions.

Cameron concurred, adding that there is a need for industry and regulatory collaboration on standardisation, otherwise the ability to capture and reduce Scope 3 emissions wouldn’t be possible.

The Next Generation Mobile Networks Alliance (NGMN Alliance) and Rakuten Symphony have recently shared ideas for a methodology to assess the quality of sustainability of telco equipment and third-party activities.

Another significant challenge outlined by telcos who were surveyed by STL Partners relates to the acceleration of the circular economy, which is closely linked to Scope 3 and finding ways to reuse or recycle elements in the value chain.

Interestingly, operators were also found to lack clarity around how 5G and virtualisation will affect carbon emissions, despite numerous claims by analyst bodies and telco players that the next-generation mobile network is much more energy efficient than earlier generations – see Telcos could save up to 70% power usage by optimising 5G hardware.

Some telcos, STL stated, encounter difficulties with securing buy-in from key stakeholders when it comes to enhancing their sustainability credentials. Here, Cameron argued that environmental sustainability cannot be the responsibility solely of teams focused on corporate social responsibility (CSR) but needs involvement from every person and level within an organisation. On that note, she suggested that the bonus structure for employees should not just be about hitting financial, operational or customer engagement targets, but “should also be about hitting some sustainability targets”.

Additionally, STL Partners highlighted that, despite these challenges, operators are increasingly committed to a net-zero future and many Europe-based telcos commit to earlier deadlines (typically by 2040) compared to some of their Asian and North American counterparts, which have so far promised to be net-zero by 2050 or even 2060. The analysts suggested that the regulatory environment in Europe is pushing harder than in other regions for companies to achieve their sustainability goals, alongside broader access to renewable energy.

STL Partners also noted sustainability has rapidly climbed on the industry’s agenda and highlighted its recently published scoreboard outlining the top big-name telcos in terms of their sustainability credentials – see Telefónica is top of the telco sustainability class, says STL.