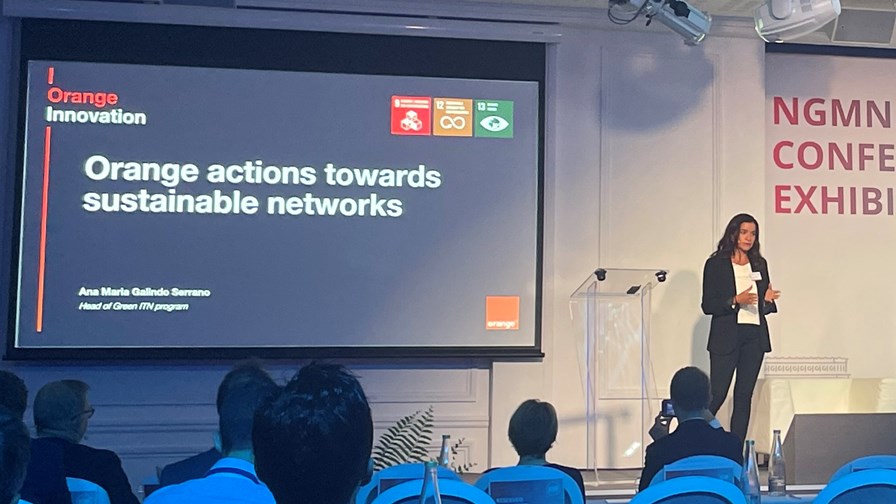 Orange is seeking to make greater use of AI tools and network data to improve the efficiency of its network operations and better manage its energy efficiency, the operator’s head of Green ITN programme, Ana Maria Galindo Serrano, told visitors to the Next Generation Mobile Networks (NGMN) Alliance’s Industry Conference & Exhibition in Paris last week.

Serrano (see image, above) explained during a green networks conference track that the telco has set four targets for reducing its environmental impact within its wider Engage 2025 strategy.

One target is to better manage the growth of the telco group’s overall energy consumption as network data traffic volumes grow, while another is to switch to renewables for 50% of the power used by 2040. The company also aims to reduce its carbon dioxide emissions by 30% compared to 2015 figures by the same date.

Importantly, the telco is also aiming to reduce indirect scope 3 emissions from its suppliers by 14% compared to 2015 levels. Serrano noted that the company expects to deploy “very aggressive” emission reduction programmes in the coming years.

Orange is also working on eco-designs for its products with the objective of its suppliers making “important commitments” in terms of helping to reduce the telco’s emissions.

In terms of technology specifications, the company is looking to deploy green features and capabilities, such as using meters, artificial intelligence (AI) and big data for improved network optimisation.

Another priority for the group is to include circular economy criteria in each of the requests for proposals (RFPs) it makes, so that it gets equipment that is easier to repair, lasts longer and is easily refurbished.

“Our priority in Orange is to work out how to reduce the interventions that we have in the networks for maintenance, to make our service providers consume less, and to have our providers produce equipment which lasts longer,” she noted.

She called for network operators and the NGMN Alliance to figure out how to better measure electricity consumption and the emissions related to it – something the alliance also called for earlier this year at MWC Barcelona (see NGMN Alliance brings its green network benchmark plan to #MWC22).

Asked about the use of liquid cooling in datacentres, which is seen by industry analysts as a sustainable way to keep temperatures down and reduce the environmental footprint of facilities, Serrano said Orange has been conducting tests and business cases to understand the return on investment metrics. She concluded that liquid cooling “is a solution that is very interesting to us”.

However, the introduction of such technology requires specific investments, so “we need to work with our countries to explain why going for this solution is good”.