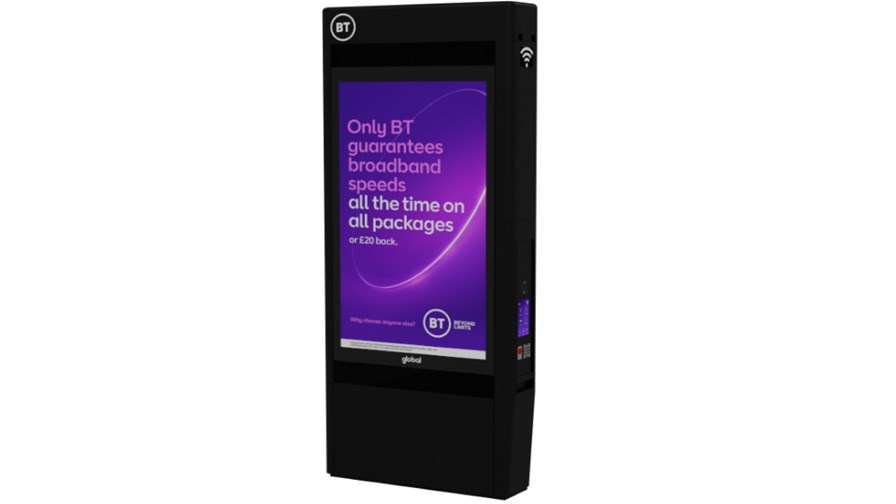 If you thought that the ‘street hub’ multimedia digital street furniture concept had gone the way of the Dodo or indeed the old telephone box, you’d be wrong. We may be knee deep in mobile phones with more on the way, but there is still a place for public communications hubs as a supplement, or for when the usual channel of communication goes down or flattens its battery - given the current reliance on communications technology, perhaps even more so.

The communications hub is also a visible sign of municipal action and community communication, bestowing brownie points for the local authority and the telco responsible for the infrastructure.

And the service is being used, often in difficult circumstances.

BT reports that the existing Street Hub units processed 47 million Wi-Fi sessions and 3.3 million free connected calls from February 2019 to January 2020. Within those numbers there were around 22,000  calls to emergency services and 2,500  to charity lines.

For these reasons and more, BT is investing in a next generation of street hub with Street Hub 2.0, which will hit the streets alongside the existing Street Hubs and reach further into the community.

BT has updated its ‘street hub’ design and added some tech goodies to the unit to make it fit for the 21st century, it says. There’s environmental monitoring for a start. Street Hub 2.0, will be sniffing for air and may have CO2 sensors built into the new units. This will provide “actionable environmental insights” to help local councils achieve their sustainability goals such as becoming carbon neutral by 2030, a target that nearly two thirds of local authorities have accepted.

The new units will start rolling out across cities throughout the UK later this year. The existing Street Hubs already connect to ultrafast free public Wi-Fi, with an outdoor Wi-Fi access point connected directly to the fibre broadband network, bringing speeds of up to 1Gbps to users within 150m of the unit. The new Street Hub 2.0 units add 4G and 5G small cell capability to improve network coverage and capacity for local residents, local businesses and visitors to high streets.

BT has appointed hardware supplier Trueform Digital to produce the next 200 or so hubs which will join over 400 hubs already deployed and BT will continue to partner with Manchester based technology, software and support supplier ADXBA, and Global, the Media & Entertainment group, as its advertising partner to support both old and new  digital street units.The new Street Hub 2.0 units will be installed alongside existing units to new sites across the UK.

James Browne, Head of Street at BT (cool name, cool job title… Get down!) maintains that the free digital services provided by BT’s Street Hub units can play an important role in helping to revive the UK’s high streets following the pandemic.

“We are working closely with local councils and communities to introduce the new units to more parts of the country, enhancing the UK’s future digital infrastructure, and bringing benefits to residents, businesses and tourists alike.”

For local businesses, the upgraded units also feature an accessible digital advertising solution run by Global, BT’s advertising partner and designed  to support the marketing needs of local businesses, helping them to rebuild post-pandemic brand awareness as restrictions continue to lift across the country.

In addition, each local authority is also provided with 5% of total screen time on each Street Hub to promote local municipal services and better inform the local community about developments or issues affecting their area. For example, during the Covid-19 pandemic, existing Street Hub units across the country played a vital role in displaying key public health advice from Public Health England and local councils.

If local authorities play ball, BT plans to roll out more than 200 Street Hub 2.0 units to new sites across the UK over the next year.