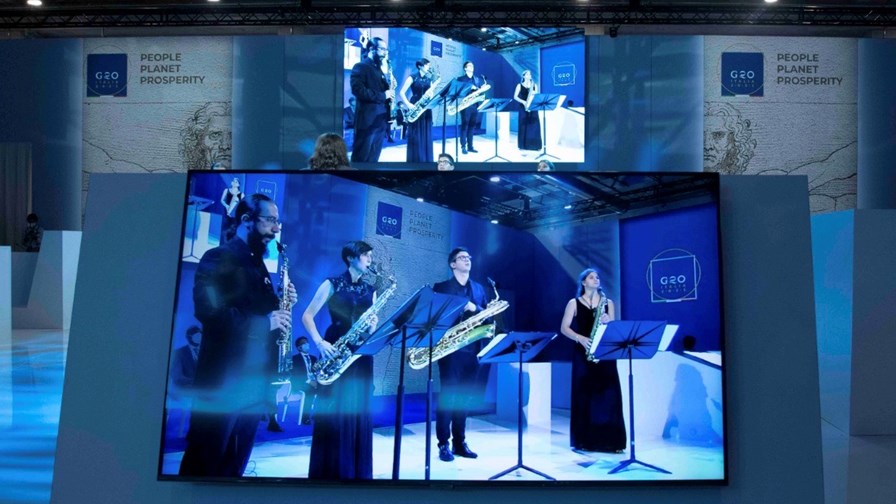 The live stream of this quartet was sent via connections secured using quantum cryptography.

A tale of next-gen innovation in the Adriatic region and a tale of woe in India top today’s pile of news.

TIM and its international unit Sparkle have participated in what the Italian operator says is “the first public demonstration of an international quantum connection on optical fibre” between three countries: The secure connections were set up between Trieste in Italy, Ljubljana in Slovenia and Rijeka in Croatia. Attendees at the G20 meeting currently ongoing in Trieste were able to watch a video stream of a live concert performed by three quartets (one of which is pictured above) that was secured using quantum cryptography. The connections were set up and managed by TIM and Sparkle in collaboration with the University of Trieste and the National Institute of Optics of the National Research Council (CNR). “A connection was established for the quantum distribution of cryptographic keys through trusted nodes, a fundamental element to ensure the extension of quantum networks over large distances,” noted TIM. “The technological solution adopted, with nodes at linear distances ranging from 80 to 100 kilometres between the three countries, used highly innovative quantum communication architectures with high security levels,” it added. The demonstration was set up as part of the European Commission’s EuroQCI (European Quantum Communication Infrastructure) project. For further details, see this press release.

In India, it has hardly come as a surprise that Gopal Vittal, the CEO of Bharti Airtel, has announced that the country needs three private mobile operators for competition to thrive in the sub-continent. He added that he would like the national government to provide some sort of help to what he describes as a “financially-stressed” industry. His intervention came as the long-advertised “imminent” collapse of Vodafone Idea became even more imminent. In essence, Vodafone Idea is broke and saddled with unmanageable debts. Despite commanding a market share of more than 20% in one of the world’s largest mobile markets of almost 1 billion active mobile connections, Vodafone Idea has neither a plan nor the money to pay down those debts. Yesterday its already depleted share price fell by a further 17 per cent as the company went cap-in-hand to the government begging for cash. Lending institutions exposed to Vodafone Idea are holding “urgent talks” to decide what to do. The choices are stark: throw in the towel and take the loss or continue to throw good money after bad.  Yesterday, billionaire businessman K M Birla offered to donate his 17 per cent stake in the tattered telco to the government, “or any other entity”, in an effort to stave off what many analysts now see as the inevitable bankruptcy of Vodafone Idea. Birla also stepped down as non-executive director and non-executive chairman of the telco. If Vodafone Idea collapses, India, which not so many years ago had more than 10 mobile operators, will be left essentially with two major privately-owned operators – Reliance Jio (about 36% share) and Bharti Airtel (about 30% share) – and state-owned BSNL, which is hardly in great shape with a market share of about 10%.

After two years under house arrest in Canada, Huawei CFO Meng Wanzhou’s extradition hearing is nearing its conclusion, with her lawyers, in what seems like a last-ditch attempt to prevent her being handed over the US authorities, questioning the reliability of information presented to the proceedings by the US legal team, reports Reuters.

Amazon Web Services (AWS) is working with researchers at the National University of Singapore on both the development of new algorithms for quantum computing and on simulation techniques that, later, will have commercial application with real data in a quantum environment. According to an MOU signed on Monday this week, AWS will gain access to National University’s “Quantum-Safe Network” and, via that, will conduct experiments and integrate them into Singapore’s fibre networks to observe quantum technology in non-laboratory application. The initial intent is to provide solutions to support Singapore’s Smart Nation Plan in areas including traffic optimisation and shipping and port operations. The university will train staff in commercial business in Singapore to become experts in quantum computing. Central to the agreement is the Quantum Engineering Program (QEP), which is a five-year-long initiative managed and hosted by the National University. The QEP began in 2018 with the remit to take abstract quantum physics theory and turn them into commercial technologies. It is halfway through that plan.

With every technological advance there’s a criminal as well as beneficial advantage. In the UK, one of the very latest manifestations is roaming gangs of thieves on e-scooters invading farmland to steal GPS technology. E-scooters, which currently are not regulated or required to be licensed are becoming the bane of urban living. Ridden on roads, pavements, grass, up alleys, down tracks and round the mulberry bush they they are cheap(ish) (or easy to steal), quick, silent and increasingly deadly. Pedestrians have been killed in hit and run incidents and serious accidents are commonplace. Now the scourge has spead to the countryside. GPS is a vital and expensive component of modern farming providing highly accurate mapping, optimum planting and harvesting routes and permitting farmers to maximise productive land use. Global equipment on tractors etc., can cost many thousands of pounds per vehicle and per fixed installation and there is a growing, thriving and lucrative international black market in ‘hot’ GPS equipment. The new Annual Rural Crime Report from the insurance company, NFU Mutual, which specialises in providing coverage for farmers and the agricultural sector (NFU stands for National Farmers Union), shows that while thefts from farms fell by 20 per cent in 2020 during the pandemic lockdowns, when even thieves skulked at home, the company nonetheless paid farmers £2.9 million in compensation for the theft of farm vehicles and associated technology. Farmers are also increasingly being targeted by cyber-criminals with phishing emails about post-Brexit agricultural payments while scams for machinery and technology become more and more commonplace.