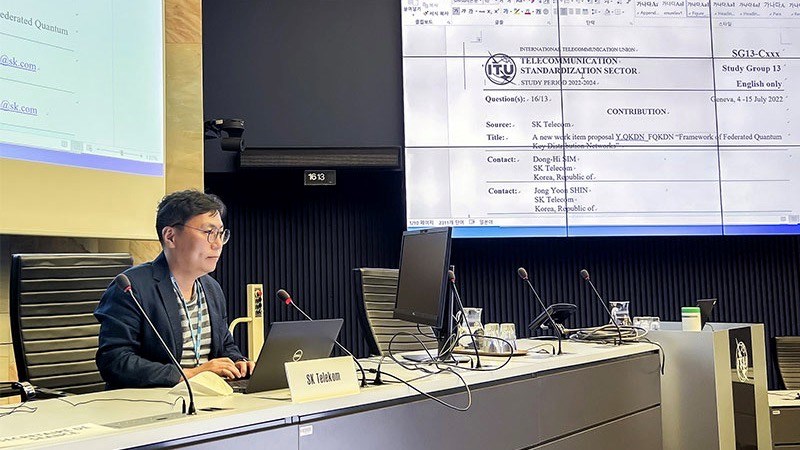 SK Telecom at the ITU-T meeting held in Geneva, Switzerland in July 2022.

SK Telecom (SKT) has furthered its efforts to lead in the quantum computing era by scoring an approval for its technologies to be adopted as international standards for quantum cryptography communication networks.

In its statement, the South Korean operator explained that its innovations covering the control and interworking of quantum cryptography communication networks will be qualified as international standards through discussions among member countries of the ITU Telecommunication Standardisation Sector (ITU-T).

The technologies were chosen as “new work items” at the ITU-T meeting held this week in Geneva, Switzerland, and are deemed by SKT as “essential for the popularisation of quantum cryptography communication technologies”.

One of SKT’s technologies acts as a software-defined networking control system that lets telecoms companies manage both their existing networks and quantum key distribution (QKD) networks “in an integrated and efficient manner”. The technology also allows telcos to work with multiple QKD equipment companies to deploy quantum-powered networks, which is a feature that SK Telecom believes will give “a huge boost to the growth of the related ecosystem”.

Its other invention, called Quantum Key Distribution Network Federation, will mirror international roaming in that it will enable the delivery of “quantum-safe communication services” for customers, regardless of whose QKD network they are on. It will do so by supporting what SKT calls the “interworking/federation” between QKD networks of different service providers.

In the future, this technology is expected to serve as a QKD-powered national backbone network and to enable the “federation of satellite communication networks” with QKD networks so they can offer new quantum cryptography communication services in the 6G era.

“The approval of these two items by ITU-T carries a significant meaning as they will serve a pivotal role in accelerating the adoption of quantum cryptography communication throughout the globe,” commented SKT’s chief development officer Ha Min-yong. Additionally, he expressed willingness for the operator to “drive the growth of the quantum ecosystem” by participating in the international standardisation process and developing “attractive services and business cases”.

In fact, the company has been eagerly pushing for the integration of QKD-related technologies and services for years. One of its most significant partnerships in the field is with datacentre and colocation provider Equinix to offer QKD-as-a-service (QaaS) in the South Korean and overseas markets.

It is also building pilot QKD infrastructure and developing applications for 17 institutions from the public, medical and industrial sectors. Other moves in the area include a partnership with the SK Broadband consortium and quantum cryptography company ID Quantique to implement projects for the South Korean Ministry of Science and ICT, as well as the launch, in South Korea, of what is claimed was the first quantum-secured smart plant in June 2020. In the same year, it also applied its 5G quantum cryptography technology to IM Bank, a mobile banking app of DGB Daegu Bank.

Now it has unveiled plans to expand into the defence and public markets with the help of South Korea-based cryptography companies.

Looking at the telco landscape, SK Telecom is not alone in investing in a quantum-based future. US operator Verizon was testing QKD technology for its security properties in September 2020, while German operator Deutsche Telekom invested in ID Quantique in 2016 and is involved in the OpenQKD consortium alongside the likes of Orange, Telefónica, Nokia Bell Labs and BT. In fact, the latter recently claimed to have launched the world’s first commercial quantum-secured metro network with Japanese technology company Toshiba. While it scored consulting giant Ernst & Young (EY) as its first big client, the British operator is on the hunt to capture the interest of thousands of enterprises based in London – see BT targets thousands of businesses with its new quantum-secured network.

And despite that, BT and other telcos seem to place high hopes (and significant investments) on the development of quantum technologies, even though some analysts are doubtful over the market need for such capabilities – see Quantum technology has great potential, but can telcos really profit from it?