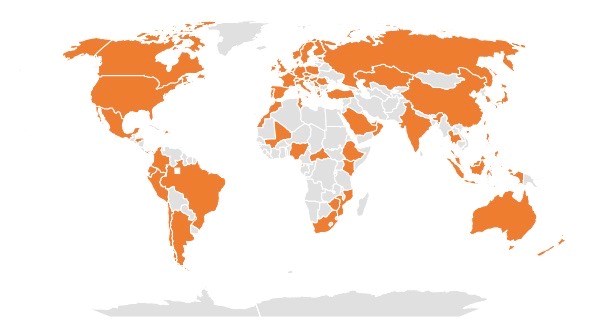 The number of 4G/LTE and 5G private mobile network deployments around the world has risen to almost 1,000 as businesses and government bodies increasingly buy into the notion that such networks best meet their security, digitisation and mobility requirements, according to a new report from the Global mobile Suppliers Association (GSA).

The number of businesses and government entities deploying private wireless networks reached 955 in the third quarter of 2022, compared with 889 at the end of June and 726 at the end of 2021, according to the study.

Two countries – Jamaica and Central African Republic – reported their first private networks during the period. With their addition, there are now 72 countries that have such networks, which are mostly being deployed in developed markets.

The markets with the most deployments are currently the US, Germany, China, the UK and Japan which, notes the GSA, strongly correlates to countries where authorities have allocated dedicated licensed spectrum for such rollouts.

A geographical breakdown showing private network deployments worldwide can be found in the image above.

The GSA’s report also highlights how important dedicated, private networks have become for certain sectors. Manufacturing stands out as the dominant vertical: By the end of the third quarter, more than 160 customers in manufacturing had either deployed private mobile networks commercially or were conducting trials, accounting for about 17% of the global total, with automotive manufacturers the dominant sub-group within that sector. Second in the ranking is education, with close to 100 deployments – see the graph, below. 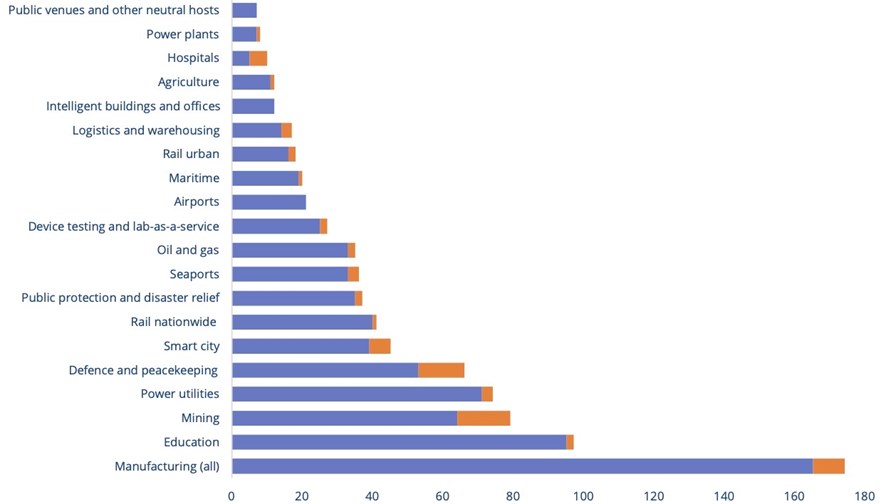 Number of identified customers deploying private mobile networks in trials and commercially, by sector. The ones in orange colour have been added in Q3 2022. Source: GSA Private Mobile Networks December 2022

During the third quarter, mining, defence and peacekeeping, and manufacturing were the fastest-growing industry sectors in terms of private wireless network adoption.

From a deployed technology perspective, organisations “still favour LTE [4G]”, with the technology being used in 711 (75%) of the 955 deployments identified by the GSA, while 5G has been used by 391 (40.9%) of these customers – that is to say 18% of deployments use both LTE and 5G technologies.

“We’re witnessing a steady growth in private mobile network deployments on various levels… with LTE and 5G both gaining traction… with countries all over the world actively deploying the technologies,” commented GSA president Joe Barrett.

The GSA also noted that organisations are increasingly combining connected systems with big data and analytics to transform their operations and enhance their efficiency through automation. “Wireless networking with LTE or 5G enables these transformations to take place even in the most dynamic, remote or highly secure environments, while offering the scale benefits of a technology that has already been deployed worldwide”, the association claimed.

Various telecom players and hyperscalers view private networks as a beneficial way to broaden their service portfolio and cash in on new revenue streams, especially with the delivery of solutions targeted at enterprises. Recent examples of developments in this space include Vodafone Business’s partnership with automaker giant Porsche on a 5G hybrid mobile private network; Federated Wireless working with Amazon Web Services (AWS) on private wireless deployments; Telstra’s collaboration with Ericsson to deploy a 5G network slicing service orchestration capability and develop a suite of 5G standalone (SA) platform-enabled automated and orchestrated services; and Liquid Networks’ partnership with Nokia as a means of becoming a mover and shaker in the 4G and 5G private networks sector across Africa, to name a few.

2023 Will See Outdoor Use Cases Drive Private Cellular, But Private 5G Won’t Yet Take Off