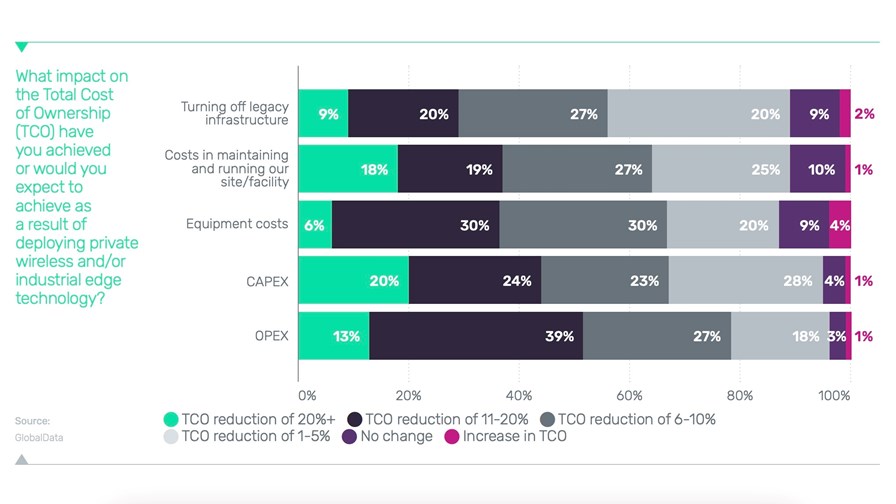 Early enterprise adopters of private wireless networks are convinced the technology has brought them an array of benefits, with the most remarkable ones related to cost reductions and energy savings, according to the results of a survey sponsored by Nokia and conducted by research firm GlobalData.

The study considered the opinions of key decision-makers at 79 multinational companies, in manufacturing, energy and transport, that were pioneers in deploying private wireless networks.

The findings mark the success of such deployments – for instance, more than half of respondents say they have already achieved cost reductions since implementing the technology, while most respondents (more than 79%) claim to have seen or expect to see a return on investment (ROI) within six months.

There is also “a high level of confidence” in the ability of private wireless, industrial edge and, particularly, integrated solutions, to reach business goals across aspects such as cybersecurity, cost, efficiency and sustainability. More than 50% of decision-makers surveyed have recorded at least a 6% decrease in total cost of ownership (TCO), while nearly a third (29%) have experienced a more than a 10% decline. For more insights on this aspect, see the image above.

As sustainability rises up companies’ agenda, some respondents have welcomed a more than 20% improvement in internal metrics, such as reduced downtime and energy consumption, after implementing technology that provides enhanced sensor and data analytics.

Other conclusions from the study suggest that businesses believe they would benefit from a subscription-based pricing model of a private wireless-as-a-service so they can scale up capabilities, and that they increasingly understand that digitalisation solutions, such as private wireless, on-premises edge, devices and applications, can help them become “more competitive and achieve their security, operational and sustainability goals”.

The survey also highlights that Wi-Fi will still have a place for some functions, but the majority of respondents are aware of the need for private wireless that works in combination with other wireless technologies to enable “a holistic approach to connectivity”. As such, nearly 80% of those surveyed had either deployed or had plans to deploy industrial edge solutions to take advantage of low-latency on-premises data processing for Industry 4.0 mission-critical use cases, in addition to reasons involving data sovereignty and security.

Apart from these insights, the survey found that there are still some barriers to adopting private wireless. The main blockades include the need to amortise existing infrastructure before investing in new solutions, incompatible corporate policies and data security concerns – see graph below. 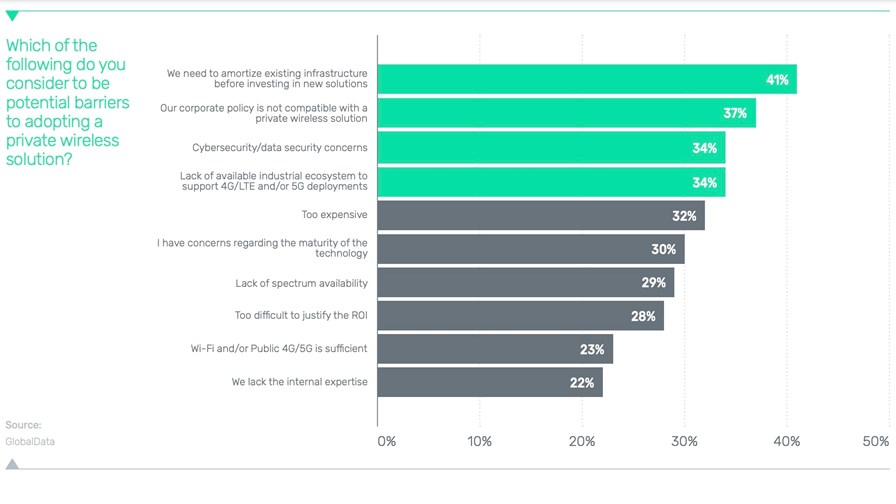 When it comes to adopting industrial edge solutions, the main hurdles are related to how complex it is to justify the return on investment (ROI), the lack of pre-configured solutions and the existing distributed compute, such as programmable logic controllers in machines.

Despite this, the survey is optimistic about the benefits that solutions such as private wireless could offer enterprises.

According to John Marcus, principal analyst at GlobalData, businesses should identify solution providers that deliver a modular approach, “allowing them to evolve at their own pace” so that solutions meet their specific needs.

Nokia, which is placing a big bet on private wireless deployments and already boasts some 500 private wireless customers, believes the survey findings confirm that it’s approach of delivering “one pre-integrated platform for industrial digitalisation” is preferred by enterprises, said Stephan Litjens, VP of cloud network services at Nokia Enterprise Solutions.

The vendor recently enhanced its portfolio in this space – see Nokia beefs up its private wireless networks offering.