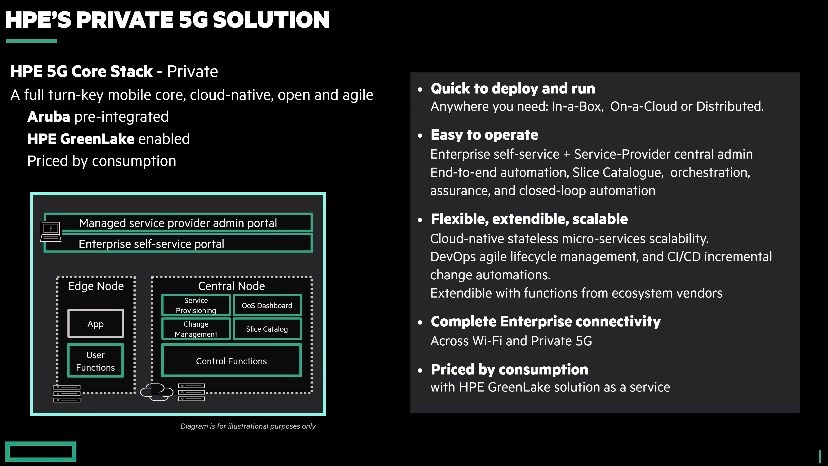 HPE is the latest company to plant its flag on the private 5G networking hill with the launch, just ahead of #MWC22 in Barcelona, of its own private 5G solution that brings together multiple elements already in its broad portfolio plus a few cellular elements from key partners, namely Airspan Networks and JMA Wireless. What helps it to stand out from many in the private wireless networking crowd is that it has products and know-how in a very important area when it comes to enterprise wireless connectivity – Wi-Fi.

For the private 5G solution, HPE is essentially combining: A slimmed-down version of its 5G core stack, which it launched last year; HPE Service Director management and portal software; HPE GreenLake, which is essentially a local, on-premises compute and storage platform that is charged using a consumption-based model, like a local data centre-as-a-service; Aruba Wi-Fi technology and software, including Air Pass, which enables roaming between Wi-Fi and 5G; and radio access network (RAN) hardware and software from Airspan and JMA Wireless for 5G and 4G/LTE (with further partnerships to come). You can check out the full details in the company’s official launch announcement.

The vendor isn’t coming into this cold: Aruba has given it a foot in the enterprise wireless networking camp for years, while it has been developing private wireless packages for enterprises for a few years, and already claims to have 20 customers for its private 5G solution, as well as a relationship with Japanese service provider OPTAGE. (See Leading Japanese telecommunications provider OPTAGE trialling local 5G services powered by HPE 5G Core Stack.)

And the 5G/4G/Wi-Fi combination makes a lot of sense for enterprises, especially as the options can be used how and where they best fit. “It’s not an either/or... I think in terms of price point, Wi-Fi will continue to have advantages over private 5G, but where we see high complementarity is in application areas that require high geographic coverage, high mobility within the geographic coverage and ultra-high reliability,” noted Tom Craig, VP and General Manager of HPE’s Communications Technology Group during a media briefing. “So, geography, mobility, and reliability are the three key factors that we see” when weighing up which wireless tech is best to use.

So, HPE is pretty well set up: It has a lot of relevant industry experience, the required technology, the business models and the partners to fill in where it has a portfolio gap (the RAN stuff); and it has existing customer experience. Richard Band, Head of Mobile Core and 5G at HPE’s Communications Technology Group, notes the company has had deployments since 2020 and has learned there are three models of deployment among enterprises: Autonomous operations, essentially a network-in-a-box scenario for locations such as oil fields and mining facilities or for use by defense departments; supporting critical applications in sectors such as healthcare, where a lot of connectivity and data processing is needed with a need to keep the data local and secure and not be transferring large volumes to and from centralized data centres; and dedicated use networks, such as for media companies, that want control of a network, want guarantees and don’t want shared resources.

In this latter situation, “in theory, this is something that can be done as a slice of a public 5G network,” says Band. “But in practice, the public networks are not quite there yet, either because they are still rolling out the radio access networks or 5G standalone core, and even if they have both of these elements they may not have the slicing capabilities that would enable them to logically separate the networks and create a virtual private 5G network.” So there is an extra opportunity for the private wireless options while slicing finds its feet, reckons Band.

But of course, HPE is just one of a host of companies that have jumped on the private wireless networks opportunity, and some have been doing it for longer than HPE: Nokia, for example, claims to have about 400 private wireless network customers already and is also regarded as a market leader in terms of capabilities. (See Nokia tops private networks leaderboard.)

And there will be more joining the fray of course, and others singing from the same hybrid wireless hymn sheet as well: In fact, earlier this month, another big name in enterprise IT, Cisco Systems, launched Cisco Private 5G, a “vision of the future of work is built on wireless through a combination of private 5G and Wi-Fi, where enterprises can modernize, automate their operations, and benefit from the resulting productivity gains.”

And it was notable at the time how Cisco was bigging up its hybrid approach as being a differentiator: “Competitors are going about it the wrong way. They would have you adopt a complex, carrier-centric 5G solution that’s radically different from what you already know and use. Some even ignore Wi-Fi entirely,” noted Masum Mir, Vice President and General Manager for Cisco’s Mobile, Cable and IoT business, in a blog post.

HPE declined to even recognize Cisco's existence, let alone the competitive nature of its offer, so there was nothing in the way of rival banter to be had from the vendor's team.

So it’s all about delivering what enterprises want and in the simplest, less painful and most economic fashion. But deploying a private wireless network sounds complex, time-consuming and costly, especially when it needs to be integrated with existing enterprise IT systems to be able to hook into existing processes and functions.

“We look at it as a trade-off or a stepped approach,” says Band. “The first step is to simplify the 5G admin to a level where the IT admin team can manage day-to-day tasks with limited effort, essentially running Wi-Fi and 5G tools side-by-side. This can be sufficient as a first approach, at least for provisioning – device onboarding – and QoS monitoring,” says the HPE man. “A tighter integration would require end-to-end security and QoS definitions, single provisioning, and monitoring portals. Where customers are using Aruba and private 5G, we can reduce the integration cost significantly through out-of-the-box capabilities – in other cases, there will be more or less custom integration work needed.”

It goes without saying, then, that any enterprise considering a private wireless network needs to have a very detailed and costed plan to ensure the whole exercise is worthwhile, because it won’t come without its pain points.

The companies that can help take the pain, and some costs, out of the equation are the ones likely to win in the increasingly competitive private 5G networks sector.