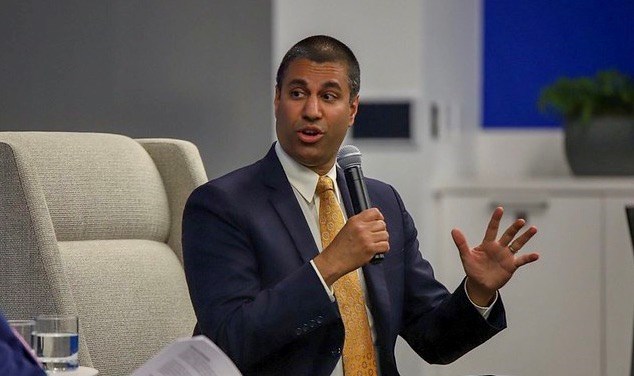 "If you have tears to shed, prepare to shed them now". Ajit Pai has left the building. He is no longer Chairman of the Federal Communications Commission, the US regulator. He has departed hard on the coattails of his don, former-President Trump that is, and we wait with bated breath to see where and when, in due course, Mr Pai will pop-up as a shining star in a lucrative new role somewhere in the US telecoms firmament. His tenure at the FCC mirrored that of his appointee on a bigger stage, characterised as it was by chaos, mendacity, partisanship, a marked absence of even-handedness and a lack of coherent policies.

As, unmourned, he departs his sinecure he has remained true-to-form, again like the former president, and issued an apologia in which he bigly self-lauds his genius and many successes, or at least what he perceives to be his successes, viz: "Serving the American people as Chairman of the FCC has been the greatest honor of my professional life."

He added, "Over the past four years, we have delivered results for the American people, from narrowing the digital divide to advancing American leadership in 5G, from protecting consumers and national security to keeping Americans connected during the pandemic, from modernizing our media rules to making the agency more transparent and nimble.  It has been a privilege to lead the agency over its most productive period in recent history."

That's his valedictory to the staff of the FCC. It may be largely fantasy but at least it has the virtue of being short. The full version is almost beyond belief; alternative facts from an alternative universe.

His modestly titled full farewell address, "FCC Accomplishments Under Chairman Ajit Pai" ought to be a slim document but turns out to be a bloated list of all the great things he thinks he has done over his four years in the job starting with "Bridging the Digital Divide" through to "Providing billions of dollars for rural broadband buildout, removing red tape, advancing telehealth, supporting precision agriculture, and more" by way of "Securing American Leadership in 5G Connectivity", "Protecting Consumers and Enforcing the Law", "Transparency and Process Reforms", "Eliminating and Modernizing Outdated Regulations".

Where to start? Analysing and rebutting claims made in a document which looks and reads like a PowerPoint presentation with more bullet points than those on a barn door after being used target practice by a man with a Gatling gun would take weeks and thousands of words. I don't have the time or the inclination to write them and you almost certainly wouldn't want to read them (but for any masochists out there, you can peruse them at your leisure and good luck!

On a long list of questionable actions Ajit Pai will be best (or worst) remembered for destroying network neutrality in the US. He undermined and worked against the Commission's own 2015 Open Internet Order ruling net and pandered to the big cablecos and telcos that would make even bigger profits from the reversal of extant net neutrality policy.  Pai claimed, "This decision reversed the prior FCC’s imposition of heavy-handed, utility-style regulation on broadband providers."

The FCC's Broadband deployment report of 2020 has it that 21.3 million American living in rural and remote parts of the country still do not enjoy the broadband speed of 25 Mbps downstream and 3 Mbps upstream, which, under his chairmanship, was the minimum benchmark speed the FCC deemed to be acceptable for home working and home schooling. Prior to Pai the target was 100 Mbps up and 10 Mbps down.

Meanwhile BroadbandNow Research used the FCC's own data to find that the actual number without meaningful Internet access is 42 million, double that reported by the FCC. Elsewhere, Microsoft, no less, has estimated the number to be north of 160 million.

And it's not just rural and remote areas that are deprived of fast Internet access. It is often forgotten that in the US the digital divide remains mainly an urban phenomenon with low income and minority ethnic communities still unable to join the electronic economy because they are still on the wrong side of the digital divide.

The OECD (Organisation for Economic Co-Operation and development says that the US is now in 18th place in the ranking of global adoption of broadband. Ten years ago it was in 15th place. Meanwhile, and as was expected, the price of broadband connectivity has risen everywhere in the US and continues to do so even as choice of suppliers stagnates and QoS and CRM continues to decline.  Nonetheless, just three days ago, under the ancien regime, the FCC claimed in a press release that the "Digital Divide Is Rapidly Closing". Hark, you can hear the hinges creaking.

With the Biden administration now taking shape there is speculation about who will replace Pai, with FCC Commissioner Jessica Rosenworcel regarded as being the front runner. Also being mentioned is Mignon Clyburn, who was an FCC Commissioner between 2009 and 2018 and has been been appointed to Joe Biden’s transition team for the FCC.  Whoever gets the job, the Pai.n is over, at last.