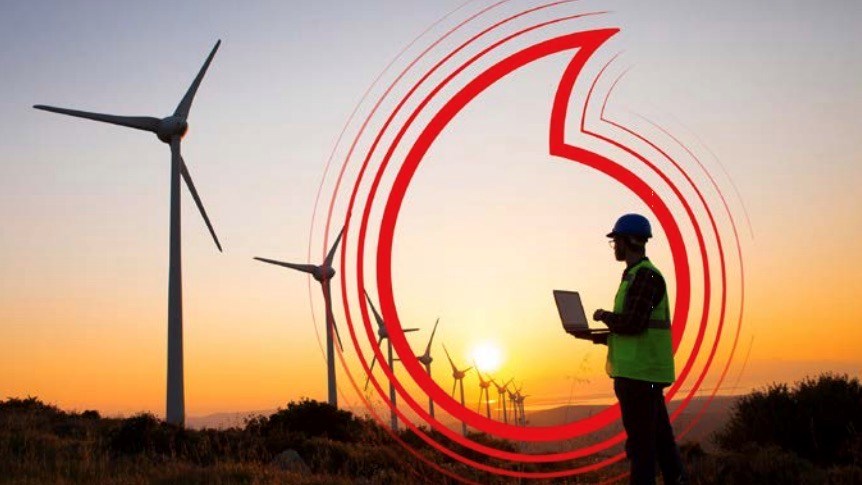 Vodafone reported its latest full financial year numbers to the stock market today, prompting multiple headlines about how it missed ‘expectations’ and saw its stock lose value. Indeed, its share price dipped by about 6% to 133 pence on the London Stock Exchange following news that full year sales were down by 2.6% to €43.8 billion, due to a pandemic-induced slump in roaming revenues and the impact of exchange rate changes, while full year service revenues fell by 1.9% to €37.1 billion. That it increased its operating profit by more than 24% to €5.1 billion and cut its debt (albeit not by much and it’s still enormous at €40.5 billion) was not enough to calm the nerves of shareholders, it seems.

One of the things the finance world doesn’t seem to like is that Vodafone has been investing quite heavily in its networks – the more it spends, the less it has to hand out in dividends – and Vodafone Group CEO Nick Read made it clear today that there’s plenty more capital investment to be made as part of the ongoing strategy.

“We have delivered on the first phase of our strategy to reshape Vodafone as a stronger connectivity provider - including the simplification of the group to Europe and Africa, the successful IPO of Vantage Towers (€13.2 billion market capitalisation), the fast roll out of our next generation mobile and fixed networks, share gain in broadband subscriptions and continued reduction in customer churn,” noted Read in the operator’s earnings statement. (See

“Our digital transformation initiatives have generated savings of €0.5 billion over the year and the integration of the assets acquired from Liberty Global is well ahead of plan. The world has changed. The pandemic has shown how critical connectivity and digital services are to society. Vodafone is strongly positioned and through increased investment, we are taking action now to ensure we play a leadership role and capture the opportunities that these changes create.”

This makes sense, right? Vodafone has known for a few years what it wants to do, which is to build a kick-ass network that can deliver the services that individuals, companies and others (including governments) need. It hasn’t invested in film studios and TV rights: Those that did (AT&T, Verizon, to a certain extent BT) are now regretting the move and reversing those investment decisions so they can focus on the fibre broadband and 5G access infrastructure that enables telcos to play a somewhat unique and (as everyone now realizes) absolutely critical role in societal and industrial development. (See

And it’s going to carry on doing that: In today’s lengthy and detailed announcement, Vodafone noted that its growth strategy requires “a greater level of investment” in four major areas – here’s how it described them:

Accelerating digital capabilities is absolutely key, of course, whether behind the scenes in operations or in customer-facing interactions. Vodafone notes:

“In the new decade, our ambition is for customers to primarily interact with us in a 'Digital First' manner. Our investments in this area have already resulted in our artificial intelligence-enabled assistant ('TOBi') resolving 63% of customer support interactions with no human interaction and an approximate 5% reduction in the frequency of customer contacts per year to 1.4. As we look ahead, we expect the majority of new customers will join Vodafone through digital channels and the overwhelming majority of customer interaction and queries will be fulfilled through either the MyVodafone app or support provided through 'TOBi'. We will then support the ongoing customer relationship through data-driven and automated targeting of upselling, cross-selling and contract extension. This Digital First customer experience will improve customer loyalty and reduce the service cost per customer.”

And those customers are supported by increasingly cloud-oriented, virtualized network functions that are part of Vodafone’s efforts to operate its networks “following a 'Telco as a Service' ('TaaS') model. Our TaaS model is based on two existing layers of inter-connected digital technology. We have created a standardised suite of customer and user-facing interfaces for an entire omni-channel journey and called it OnePlatform. The OnePlatform suite is powered by our Digital eXperience Layer ('DXL'). DXL refers to the abstraction layer in our IT architecture which separates customer-facing micro-services requiring frequent and rapid adjustment from back-end systems such as billing and CRM. We have already moved more than half our core network functions to the cloud in Europe, supporting voice core, data core and service platforms on over 1,300 virtual network functions. In Europe, we now operate a single digital network architecture across all markets, enabling the design, build, test and deployment of next generation core network functions more securely, 40% faster and at 50% lower cost. Similarly, more than half of our IP applications are now virtualised and running in the cloud.”

That approach is also, of course, tied in with Vodafone’s efforts to embrace Open RAN architectures, distributed network intelligence and programmable networks – it’s all part of the same effort to enable a new operational model, one that is sustainable (in all the senses of the word).

This operational and architectural revamp is far from over – there is still much to be done and it’s going to take further investment and time. But without it, companies such as Vodafone would get swallowed up and lose their unique proposition, which ultimately is still based on (but not necessarily limited to) high quality connectivity. If it, and other telcos, can’t deliver on that, then they stand little chance of long-term survival. (And this, by the way, is why the operators are taking a much more active role in shaping the network technology R&D efforts of the industry these days and not just leaving it to the vendors…)

Those investments will need to come largely from cashflow: Investors shouldn’t get too excited by the mention in today’s report of the €750 billion NextGenerationEU funding pot available to European companies – only 20% of that, €150 billion, will be available for “digital initiatives,” of which there will be many, and it will be spread across all EU member markets, while Vodafone only operates in 10. But there’s a good chance it will benefit in some way, as some of the key areas of planned investment (5G acceleration, driving Open RAN R&D, rural connectivity for example) are right in its wheelhouse and two of the countries with the biggest planned EU funding are Italy and Spain, which are key markets for Vodafone: Much of that funding needs to be allocated by the end of next year, so Vodafone and other network operators will find out in the next 18 months whether they will benefit from the region’s recovery funding.

And what of these golden fixed and mobile broadband assets? How is Vodafone doing there? Well, it has (like many others) the aspiration to be the “best” wherever it is offering its services.

“In order to provide our customers with the best connectivity products and 'best on Vodafone' connectivity platforms, we need to have leading gigabit network infrastructure in each of our markets... In mobile, we are currently deploying mobile network infrastructure to deliver 5G connectivity. So far, we have launched 5G services in 240 cities, in 10 markets in Europe. 5G services provide 'real world' speeds well in excess of 100 Mbps, compared with 4G which provides 'real world' speeds of 20-35 Mbps. In addition to the speed advantage, 5G networks that are 'built right' and with longer-term competitive advantage in mind, provide more uses cases, and significant capacity and efficiency advantages, ultimately lowering the cost per gigabyte of mobile data provision. However, the European mobile sector is also utilising dynamic spectrum sharing ('DSS') technology to share existing 4G spectrum to provide a more limited 5G experience. Underpinning our 5G network infrastructure is our majority shareholding in Vantage Towers AG.”

And how about those all-important fixed broadband networks that are critical to the success of mobile broadband strategies?

“Alongside our 5G mobile network infrastructure is our NGN fixed-line network infrastructure. We can now reach 142 million homes across 12 markets in Europe (including VodafoneZiggo). This marketable base is connected through a mix of owned NGN network (56 million homes, of which 44 million are gigabit-capable), strategic partnerships (24 million homes) and wholesale arrangements (62 million homes). This network provides us with the largest marketable footprint of any fixed-line provider in Europe. In Germany, our owned network covering 24 million households is being progressively upgraded to the latest DOCSIS 3.1 standard, which provides us with a structural speed advantage over the incumbent. Over the medium-term we will continue to increase the proportion of our Europe customers that can receive gigabit-capable connections through our owned network and continue to work with strategic partners to provide cable and fibre access.”

There’s a lot more detail and a lot more information in Vodafone’s full announcement, which can be found here.

All in all, then, Vodafone looks to be in reasonable shape and positioning itself to be more responsive to changing market conditions and digital service and network opportunities. Today the headlines might seem somewhat negative, but that doesn’t tell the story of a company that, especially compared to some of its peers, appears to be making the right decisions for the right reasons.