What’s up with… AT&T + Discovery, the value of 5G, Telefónica 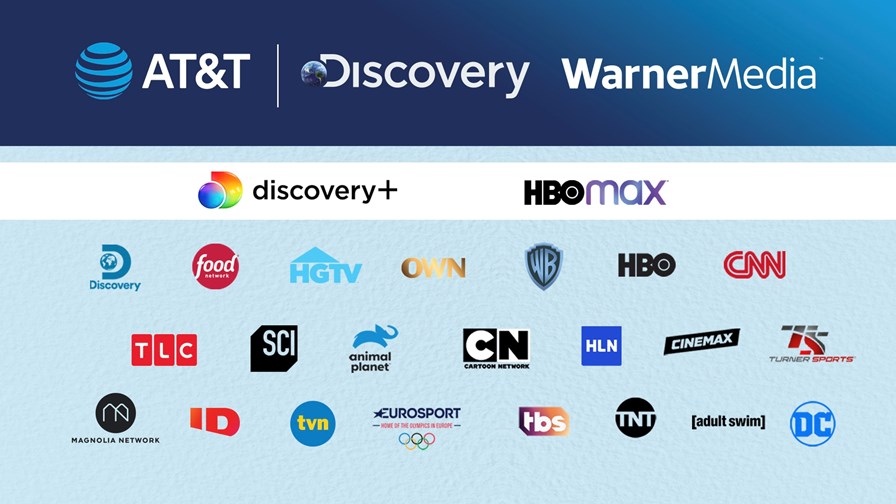 AT&T’s monster media tie-up with Discovery and the latest effort to quantify the value of 5G are today’s standout industry news nuggets.

Only a few years after splashing $85 billion on Time Warner to add media assets to its core communications services empire, AT&T is going back to basics and focusing on 5G and broadband by combining its media units with those of Discovery Inc. to create a new “content” giant valued at about $130 billion. The new company, in which AT&T’s shareholders will hold 71% of the stock and which will be christened with a new name later this week, will have annual revenues of about $52 billion and be home to such brands as HBO, Warner Bros., Discovery, DC Comics, CNN, Cartoon Network, HGTV, Food Network, the Turner Networks, TNT, TBS, Eurosport, Magnolia, TLC, Animal Planet and more. AT&T will benefit to the tune of $43 billion from the deal, almost half of what it paid just three years ago to snag Time Warner. The move was greeted positively by AT&T’s shareholders, as the telco’s stock gained almost 2% to hit $32.80 (though it was initially higher when the news was first confirmed early Monday). The move comes only two weeks after Verizon announced it was calling time on its media ownership strategy. For the full details on the AT&T/Discovery tie-up, see this announcement.

Will 5G be worth it? A question that has been asked many times during the past five years or so and will no doubt be asked another 10,000 times in the coming five. Orange has attempted to come up with an answer by getting research house Omdia to assess the impact of 5G on the economies of five European countries where it operates (France Spain, Poland, Belgium and Romania). The Omdia team concluded in this report that 5G will create €407 billion in economic value across those five markets by 2030, create more than 420,000 jobs, result in a dramatic decrease in relative greenhouse gas emissions, and save a lot of puppies and kittens (we made up that last bit). To find out how and why, check out the report, which is available on the Orange Business Services website (though, to confirm, the report does not contain any details about 5G’s impact on the wellbeing of small, cute domestic pets).

More telco rationalization? Telefónica is reportedly seeking a buyer for its logistics unit Zeleris, which has been valued by consultancy firm Ernst & Young at about €100 million, according to Reuters, which cited an unidentified source. Earlier this year, Telefónica announced the sale of its mobile masts unit to American Tower for €7.7 billion in part to help reduce its debt pile.

Vantage Towers, the towers business spun out by Vodafone and which listed its shares in Frankfurt in March, has announced full financial year results in line with expectations by reporting revenues to 31 March of €966 million. The company, which has a portfolio of 82,200 tower sites (45,700 wholly-owned and 36,500 co-controlled) around Europe, says its on course for revenues of €1 billion in the current financial year, plans to become a "5G superhost" and will explore the potential of new technology options, including Open RAN architectures. For further details of its financial year performance, see this earnings report.

It's an ill-wind that blows no-one any good. A new report from London, UK-headquartered AMA Research shows the Covid-19 pandemic was generally good for the home automation market. It makes sense. People have been confined to their homes for periods of repeated and indeterminate lockdowns and smart home devices have proliferated.  Hitherto, cost has been a major impediment to the rapid uptake of intelligent home automation product's with target audiences for the devices often complaining that whilst perhaps "nice to have" they are too expensive actually to buy, especially for the young parents with young children demographic that manufacturers have been wooing. The market is expected to grow by some year 6 per cent this year as prospects improve and much immediate growth is expected to come from the lower end of the market in general and the mid- to basic-entry level systems in particular. Thereafter, the home automation sector will hit double-digit growth by 2023 and will have increased overall by 47 per cent in 2025. Abdul Tantouch, Research Manager at AMA says, "recent advances in technology innovation helped ameliorate the perception of cost being a hurdle in the growth of the home automation market" while "manufacturers continue to address consumer concerns such as developing systems that dovetail into existing automation systems with minimal additional costs and technological improvements in data security".  ​