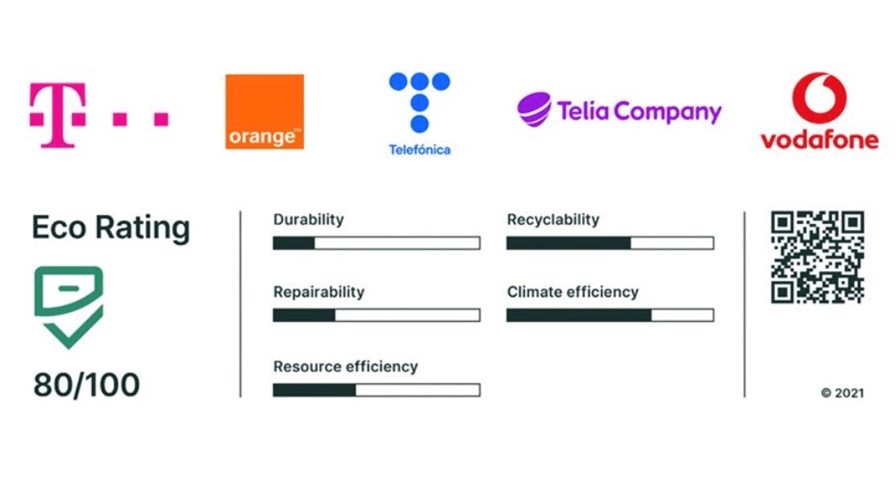 The latest operator-led collaborative sustainability effort and yet more investment for the UK’s fibre broadband market are the top news items in today’s roundup.

Deutsche Telekom, Orange, Telefónica (operating under the O2 and Movistar brands), Telia Company and Vodafone have joined forces to update and launch a new pan-industry Eco Rating labelling scheme that will “help consumers identify and compare the most sustainable mobile phones and encourage suppliers to reduce the environmental impact of their devices,” the operators have announced. New devices phones from 12 mobile phone brands will be assessed by the Eco Rating initiative, with others expected to be announced in the future. Launch partners include Bullitt Group – Home of CAT and Motorola rugged phones, Doro, HMD Global - Home of Nokia Phones, Huawei, MobiWire, Motorola / Lenovo, OnePlus, OPPO, Samsung Electronics, TCL / Alcatel, Xiaomi and ZTE (spot the notable exceptions). Read more.

News of yet another new fibre broadband investment plan in the UK comes from Netomnia, which has unveiled a £150 million investment plan to build fibre-to-the-premises connections in 14 towns and cities across the UK, including Canterbury, Cheltenham and Gloucester. The rollout will pass 500,000 premises, half of Netomnia’s ultimate target to reach 1 million premises by 2024. The company, using the Physical Infrastructure Access (PIA) option offered by national wholesale access firm Openreach, will source OLT technology from ADTRAN to offer high-speed broadband services, including 10 Gbit/s using XGS-PON ports, and work with a variety of suppliers (Corning, CommScope, Prysmian and Sterlite) for the fibre and passive infrastructure equipment. The news comes on the heels of Giganet’s change in ownership and £250 million investment for FTTP rollouts. (See  UK broadband altnet Giganet raises £250 million, has new owner.)

Swedish CPaaS (Communications Platform as a Service) specialist Sinch has raised $1.1 billion from a new share issue to shore up its finances and give it the flexibility to make further acquisitions following its recent purchase of Inteliquent for $1.1billion. Sinch’s APIs manage more than 150 billion mobile customer engagements a year across channels such as SMS, WhatsApp, Facebook Messenger, chatbots, and other voice and video platforms for many of the world's largest companies. Read more.

Enterprises are increasingly using APIs, edge computing and AI to help fulfil their cloud strategies, according to the results of a survey of 400 enterprise executives in Asia and Europe commissioned by network operator Colt Technology Services. More than half (56%) of those surveyed cited APIs as an essential technology for executing their cloud strategies, followed by edge (47%) and AI (43%), while ‘on demand and flexible networking’ also featured strongly (40%): The researcher team that wrote the resulting report noted that as it is still relatively “early days” for edge computing, it’s interesting to see it rank as high as it does: We agree, but there are an increasing number of reasons for enterprises to use edge computing resources -- keeping data processing local for regulatory and legal reasons, for example. It's also possible that the increasing use of IoT and low-latency applications might also be fuelling such a response, the report's authors noted. There are lots of other statistics and identified trends in the report to ponder, but one that caught our eye was that only 50% of respondents said they were set to work with their existing cloud service provider on their next cloud project, while only 33% said they would work with their “existing network provider” on their next cloud project. While the report’s authors didn’t find this noteworthy, it suggests that ‘churn’ in enterprise cloud project relationships appears to be high, which creates new business opportunities for alternative partners. Read more.

Amdocs is making more of its telecom software available on the Microsoft Azure public cloud platform. The move that will "enable service providers to accelerate their move to the cloud by using Amdocs' cloud-native BSS/OSS solutions and services and our unique delivery accountability model while benefiting from the cloud capabilities of Azure to build, manage and deploy service provider applications at scale," claims the vendor. Read more.