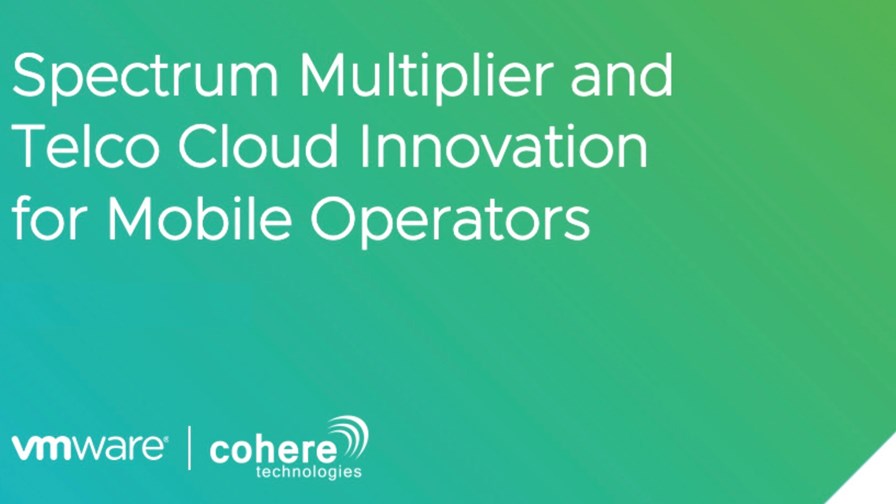 A new Open RAN collaboration, a refreshed UK strategy and a deeper dive into a next gen mobile network top the bill in today’s news roundup, with Vodafone linked to all three.

Cloud platform giant VMware and startup Cohere Technologies have teamed up to develop a solution for operators looking to deploy Open RAN systems. The solution is based on VMware’s RAN Intelligent Controller (RIC) and Cohere’s Spectrum Multiplier and Cloud Scheduler xApps and is designed to help network operators “improve network and spectrum efficiencies and deliver new and differentiated services and experiences for their customers.” The two companies were both involved in Vodafone’s recent test of a 5G Open RAN managed by a RIC. The two companies also combined for Open RAN tests conducted by Deutsche Telekom last year. For more on the VMware/Cohere tie-up, see this press release.

Vodafone UK provided a broad outline of its strategy during a virtual Reinvent 2021 presentation by its senior management team. The highlights included a commitment to connect 1 million people in “digital poverty,” a pledge to eliminate all carbon emissions from its UK operations by 2027, and the launch of EVO, a new customer plan that includes “a new way of buying a device with a mobile plan that allows Pay Monthly mobile customers to choose not only how much they want to pay up front for their smartphone, smartwatch or tablet, but also how long it will take them to pay it off – from 12 to 36 months.” The strategy was introduced by the UK operator’s recently-appointed CEO, Ahmed Essam. Read more.

Having been named as one of the key vendor partners for Vodafone’s initial Open RAN rollout in the UK, Wind River has provided more insight into how its Studio platform fits into the planned deployments, which include a multi-RAT (radio access technology) system for 3G/4G/5G and a distributed RAN architecture with the distributed unit and centralized unit systems co-located at the radio sites. For further details, see this Wind River blog.

Qualcomm and others are prepared to invest in Arm if its $40 billion sale to NVIDIA falls through and current owner SoftBank opted for a public listing of the UK chip designer, according to CNBC, citing a report from The Telegraph newspaper. The planned takeover is currently being reviewed by the UK government.

Seven European countries – The Netherlands, Belgium, Germany, Norway, the United Kingdom, Austria and Switzerland – have signed the Circular & Fair ICT Pact that aims to make “laptops and smartphones more circular and fair through procurement.” Stientje van Veldhoven, the Dutch Minister for the Environment, who initiated the pact, noted there are “many challenges in mining, production and waste of ICT, both in energy and resource use and in worker conditions. On average we use an iPhone for only eighteen months, while it contains many scarce materials. Many products have similar short lifespans and we produce so many that the ICT sector already causes over two percent of global carbon emissions. I believe we have to change course. That is why I have taken the initiative for the ICT Pact. With this pact we strive towards circular ICT products in a transparent value chain where worker rights are being protected." The move comes only weeks after Deutsche Telekom, Orange, Telefónica (operating under the O2 and Movistar brands), Telia Company and Vodafone joined forces to update and launch a new pan-industry Eco Rating labelling scheme that will “help consumers identify and compare the most sustainable mobile phones and encourage suppliers to reduce the environmental impact of their devices.” For more on the Circular & Fair ICT Pact, see this announcement.

Sparkle, the international network operator unit of TIM (Telecom Italia), is extending its new next-gen optical transport network into Northern Europe. The new SDN-enabled network, which goes by the wonderful name of Nibble, currently connects Sparkle's two major submarine landing stations in Sicily – at Palermo and Catania – with Milan, Marseille, Frankfurt and Paris to the West, and with Athens, Istanbul and Tel Aviv to the East. Now it is to be extended by a further 6,300 km during the coming weeks to northern Europe, interconnecting London, Amsterdam and Brussels, taking the total reach of the Nibble network, which has been built using Infinera DWDM hardware and programmable network software, to 12,800 km. Read more.

MTN Uganda has committed to the deployment of TIP-designed Disaggregated Cell Site Gateway (DCSG) technology in its transport network. Aviat will oversee the deployment of the DCSG solution, using Network Operating Software from ADVA running on Edgecore hardware. Read more.