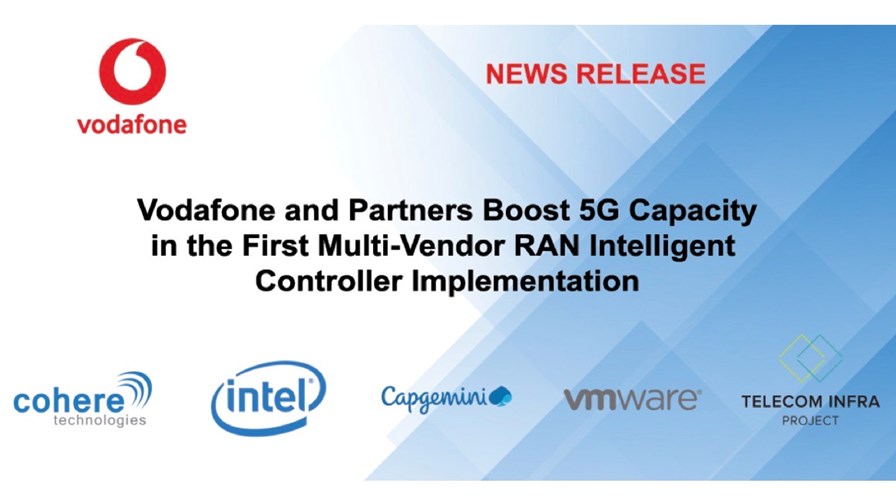 Vodafone says it has successfully tested a multi-vendor Open RAN platform that not only displays how best-of-breed technology elements can work well together but also shows how the capacity of a 5G cell site can be doubled.

The operator claims that by using a RAN Intelligent Controller (RIC) platform running functions from different partners in low-band (700 MHz) spectrum in a test lab, multiple users connected to the same site were allocated twice as much capacity as they would get from a “traditional” setup.

While this is a long way from having such capabilities running in a live commercial network, it’s an important first step in showing how the use of a RIC, the intelligent node in an Open RAN architecture, can be used to an operator’s advantage in a 5G network.

And that’s important, because without multiple technical, operational and economic 5G proof points, Open RAN will not gain industry traction needed to make it viable.

In this instance the RIC platform (based on O-RAN Alliance specifications), which has open APIs that allows it to run third party applications and which ABI Research believes will “disrupt the status quo,” was provided by VMware.

“MU-MIMO apportions ample bandwidth to individual users connected to the same mobile site and is considered the pivotal technique to boost cell capacity in future 5G networks,” noted Vodafone in its announcement about the tests. “It is a major development in supporting the insatiable demand for faster and more responsive digital connections to deliver high-definition graphics, virtual reality, cloud and IT applications,” it added.

And it’s not just applicable in low-band spectrum: “This software can be extended to Massive MIMO in mid-band (e.g. 3.5GHz) networks in order to push capacity gains towards 4-5x,” noted Vodafone.

“This initiative validates the role that this powerful new platform plays in defining Open RAN as the future of networking,” noted Francisco ‘Paco’ Martín, Head of Open RAN at Vodafone. “It boosts capacity for customers when they need it most, reduces the need for expensive hardware by a third and cuts down on energy consumption. These time and cost savings will ultimately encourage the introduction of new, innovative services.”

That Vodafone has made the outcome of this test public is not only a boost for the Open RAN community in general, but a feather in the corporate cap for the companies involved, in particular Cohere, which has been engaging with a number of major operators during the past 18 months to get its technology validated: It has also been involved in lab tests conducted by Deutsche Telekom.

“We are pleased to work with Vodafone and ecosystem partners to demonstrate the power of our Spectrum Multiplier software with MU-MIMO.  It shows how the functionalities held remotely can provide mobile network providers with the flexibility to keep network intelligence localised at the tower, or hosted at the edge data centre, while improving spectrum assets,” said Ray Dolan, Chairman and CEO with Cohere Technologies.

The other companies involved in the tests were Capgemini Engineering, which provided software that included the baseband radio functions needed to execute the MU-MIMO application’s actions, and Intel, which provided its FlexRAN software for the 5G NR layer and the compute platform underpinning VMware’s RIC and Capgemini’s baseband software.

The test builds on work that is ongoing at the Telecom Infra Project (TIP), which launched a program – RAN Intelligence and Automation (RIA) – to “aggregate mobile network operator use cases for RIC platforms and to develop, test and deploy specific solutions for these use cases,” noted Vodafone. Dave Hutton, Chief Engineer at TIP, added: “Taking a use case from the requirements phase to a working, value enhancing solution that is fulfilled by multiple parties working together is the guiding principle upon which TIP RIA was founded.”

What the Open RAN sector needs now is more such examples: Vodafone and Deutsche Telekom are both committed to Open RAN deployments and to fostering and encouraging R&D, individually and as part of a European operator collective, as well as through their involvements in TIP and the O-RAN Alliance, but the Open RAN sector needs significant scale before it becomes viable on an industrial scale, and that scale only comes from broader operator support. (See Open RAN MoU operators publish their tech wish list.)