Rakuten Symphony got into its groove at #MWC22 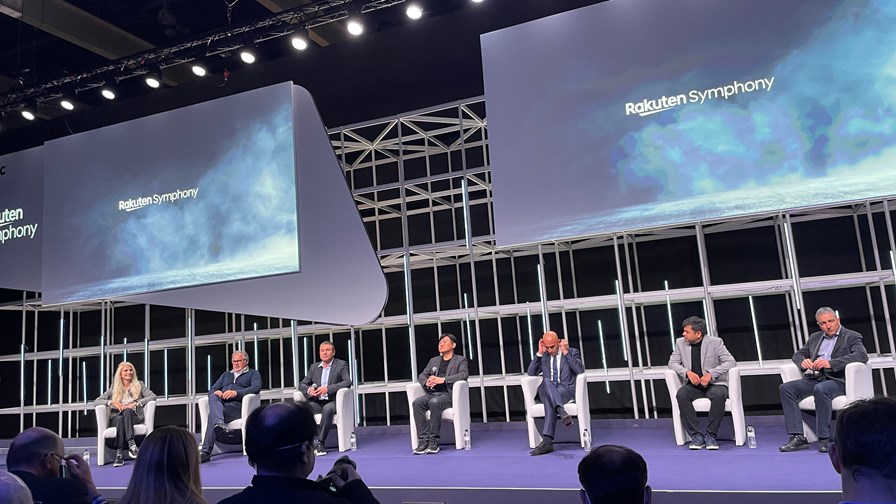 Rakuten Symphony, the Open RAN-focused vendor spin-out from Japanese mobile operator Rakuten Mobile, used the stage at this year’s Mobile World Congress (MWC) in Barcelona to offer updates on its operations, aspirations and provide a broader views on the telecoms industry.

Having unveiled its Symworld cloud-based portfolio and a partnership with Qualcomm ahead of the Barcelona event, the company made a number of announcements during MWC22, the first of which was its acquisition of Robin.io. (See Rakuten Symphony makes sweet music with Robin.io acquisition.)

But there was plenty more to follow, in both official announcements and during various briefing sessions and presentations. Here’s a snapshot of some of the key developments in which it is involved.

The greenfield build in Germany with 1&1 and other engagements

Rakuten Symphony is planning, building and then will maintain and run Germany’s new greenfield Open RAN-based 5G network as part of a deal struck last year with 1&1. Rakuten Symphony’s CEO, Tareq Amin (third from left to right), said the company was fortunate to mobilise “a significant number of the team members” into Germany despite the challenges around the Covid-19 (coronavirus) pandemic. The company hasn’t noted major issues in the associated supply chain: Amin admitted there were some delays, “but nothing major.”

Rakuten executives expect further deals of varying sizes, and expect 2022 to mark “a massive rollout programme” for the company due to accelerating momentum in the uptake of the “new breeds of technologies and the new architectures.”

And is if the show that it’s not all talk and no action, Symphony closed out MWC22 with news of an engagement with pan-African operator MTN. (See MTN leans on Rakuten Symphony for its latest Open RAN move.)

Amin highlighted, however, that Rakuten doesn’t want to be a services company. “In the long term, the dream that we have is [that] you go to this app store Symworld and you’ll be able to browse, read and understand the applications that we have and deploy.” He stressed, not for the first time, that the company’s solutions and processes can shorten system integration timescales from years to days.

Symphony also announced a collaboration agreement with AT&T to “enhance solutions within the Symworld platform to accelerate network planning and deployment in both greenfield and brownfield environments.”

The relationship is quite broad and open but, importantly, includes the use by AT&T of Symphony’s Site Manager suite that “simplifies the design and build workflows for network rollouts.”

“We already have started… on deployment today and our team have a level of agility that you won’t find in a lot of organisations,” boasted Amin, adding that deployments are happening “much faster than you would expect” at AT&T but also in engagements with other operators too, including Telefónica.

Such deals not only drive revenue for Symphony but also provide it with useful knowledge and experience. IN the work with AT&T, “we are learning a lot – how to manage our way through a brownfield deployment and integration points,” noted Amin.

Asked about the company’s ambitions to set foot in emerging markets, Amin explained: “From a scaling point of view, we have to put our energy into the right priorities. I think there are significant opportunities in Latin America, I think that’s really, really big. And when you look at our cost structure, I think… no doubt we could have a really big role to play in emerging economies and emerging markets to help them out.”

He also highlighted a social responsibility aspect of this: “If we lower the connectivity [and] architecture cost, then...  [with] 3 billion people still not connected [to the Internet], maybe we could really make a good dent into this.”

Basing the Symphony proposition on deployments in Japan

Currently, Symphony is offering to other operators what it knows already works in the Rakuten Mobile 4G/5G network in Japan – that is its proof point, its use case. Symphony’s mantra is ‘it works for Rakuten Mobile so it will work for you.’

But, I asked him, could Symphony also start to include in the Symworld portfolio tools and applications that haven’t already been tried and tested in Japan?

Amin went into detail about the Japanese culture and the high expectations in terms of quality, something he says he hasn’t witnessed to the same level elsewhere in the world. “Why do we want to test and validate the technology in Japan? Because if we could really meet this quality bar, then we feel super confident that we are not selling products that we are not 100% standing behind,” Amin noted. He also expressed a belief that the company can “fast pace” innovation in Japan much quicker than in other markets. “And then, once we harden it, it then it goes to Rakuten Symphony for globalisation,” he commented.

So, Japan continues to be the proving ground.

On the pace of telco evolution

Mickey Mikitani, the founder, chairman and CEO of Rakuten Group, which owns Rakuten Mobile and Rakuten Symphony, highlighted the unique nature of the telecoms industry and how it doesn’t have the same kind of open competition that can be seen in industries like e-commerce and banking. “Those industries are forced to adopt new technology” because of the rampant and never-ending competition and innovation. But in the mobile networking and services sectors, there are few new entrants and so little “incentive to differentiate yourself. But now, I think, because of Rakuten Mobile, everybody started to realise that this is going to be the future – not only mobile operators, but also governments” noticed the shift.

He also highlighted geopolitical issues in the telecoms industry and how this had created an opportunity for new options to be introduced: Rakuten, he said, has “a very good chance” to provide an alternative to what he called the very expensive shift from one legacy system to the next.

On energy efficiency of Open RAN

Amin called for a study to explore the efficiency of Rakuten’s architecture, taking into account a totality of headcount managing a network and people’s carbon footprint, and the company’s tools capable of turning on and off the number of cores of CPUs (central processing units) based on traffic and demand. He noted that with the Symworld proposition (within which the hardware elements are referred to as Symware), appliances don’t require air conditioning, the physical footprint is minimized, energy management is orchestrated using automation tools, and the number of people needed to run the network is much lower than the industry average. “What would be a really interesting study is a totality of all these variables together – how does it look and compare” with existing networks, Symphony’s chief emphasised.

Symphony managed to make a lot of noise during MWC22, also announcing a relationship with Cisco and the appointment of former FCC Chairman Ajit Pai to the Symphony board. It’s unlikely to be long before we hear from the new-style vendor again.