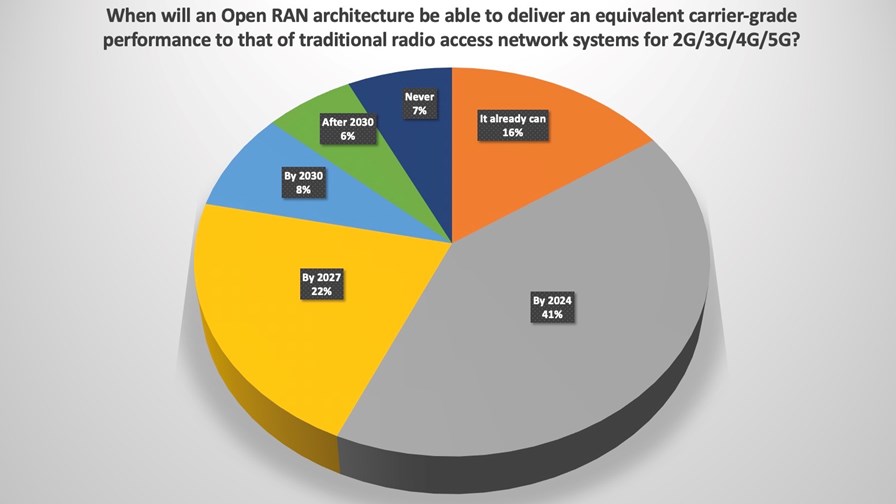 The growing support for Open RAN in the communications networking industry, including the support of multiple Tier 1 operators, is making a significant slice of the industry confident that Open RAN architectures will be on a par with traditional, integrated radio access network systems within the next few years, if not sooner, according to the results of a poll run as part of the recent DSP Leaders Open RAN Summit.

The poll, which was open to registrants for the Summit and which attracted almost 100 votes, shows that 16% of respondents believe that Open RAN architectures are already able to deliver an equivalent carrier-grade performance to that of traditional radio access network systems for 2G/3G/4G/5G. That belief most likely comes from the examples set in Japan by NTT DOCOMO and Rakuten Mobile. (See Open RAN is an urban reality, says NTT DOCOMO exec and Tada! Rakuten launches ‘free’ 5G using Open RAN.)

The most popular option, which was parity by 2024, garnered 41% of the votes, as the graphic above shows. This reflects optimism that chipset vendors will accelerate their efforts to develop the relevant components, and then make them available at scale and at an ‘affordable’ price, for applications such as 5G massive MIMO within the next three years. (See 5G Massive MIMO is Open RAN’s toughest nut to crack, says Vodafone’s Tenorio.)

And the option for ‘Beyond 2030’ received 6% of votes, slightly less than the 7% of voters who believe Open RAN architectures will never be able to match the performance and scale capabilities of integrated systems.

So there is plenty of optimism that Open RAN can soon be meeting the needs of mobile operators, giving them the capabilities they need in addition to the benefits of a broader supplier ecosystem and, potentially, a lower total cost of ownership.

The big unknown, of course, is whether those benefits will all accrue without being nullified by any game-changing challenges (such as integration and management). The one thing we can be sure about is that Open RAN will be a hot topic for at least the next two-to-three years and that much time and effort will be pumped into the supporting ecosystem in an attempt to make it all work as envisioned.

As for the results of the poll, the overall takeaway is that a healthy majority of respondents expect Open RAN options to become viable for network operators’ needs in the next three years or so, and if that happens then the market dynamics will change and the traditional vendors such as Ericsson, Huawei and Nokia will see, and be impacted by, a change in purchasing patterns.

Nokia, meanwhile, has long been talking up its Open RAN credentials, and is aiming to offer products that support disaggregation and which conform to O-RAN Alliance specifications in 2021. (See Nokia opens up its 5G RAN menu.)