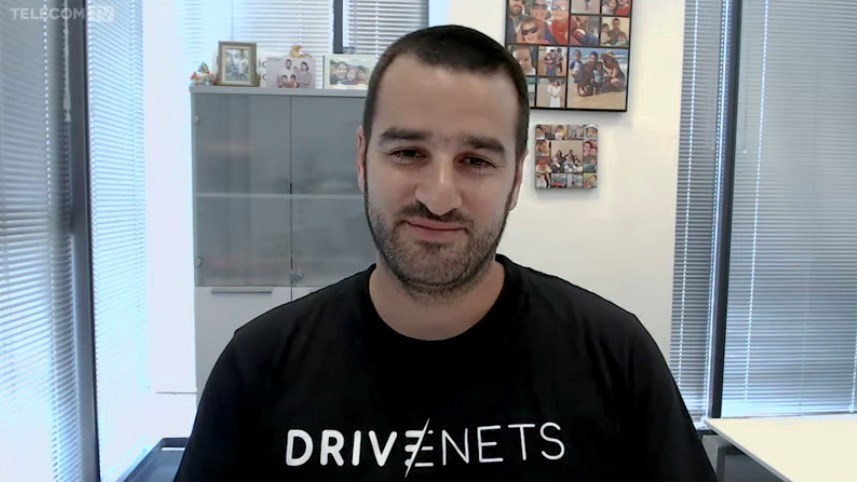 Virtualized telco router specialist DriveNets has cemented its reputation as one of the most disruptive and successful virtualised networking technology developers in the telecoms world by raising a further $262m in a Series C round of funding, with its previous backers all returning to provide the Israeli vendor with additional funds that can help it challenge one of the giants of the data networking world, Cisco Systems.

The round takes the company’s total funding to $587m, an astonishing figure. It had already achieved ‘unicorn’ status (a company with a valuation of more than $1bn) with its previous funding round of $208m in January 2021, but CEO and founder Ido Susan won’t be drawn into giving details of the valuation that the new cash injection gives his company, saying only that it has increased significantly. “I told you I was going to build a big company,” he said, referring to a conversation we had years ago when the company was still a small startup.

So what’s the appeal?

DriveNets was founded in 2016 by Susan, a serial telecom technology entrepreneur and innovator who is still the Ra’anana, Israel-based company’s CEO. He identified an opportunity to use open, cloud-oriented platforms to develop an alternative to the chassis-based IP routers from the likes of Cisco, Juniper Networks, Nokia and Huawei, which shunt data packets around the world’s networks, and developed an IP networking software stack dubbed Network Cloud that, when deployed on high-performance white box server hardware based on Broadcom Jericho2 processors, has the throughput and scale needed for core networking routing functions in telecoms and hyperscaler networks.

The router platform market is littered with failed startups, but those companies had taken a hardware-based approach with the associated pricing models: Susan boarded the virtualisation train at just the right time and convinced one of the biggest and most influential operators in the world, AT&T, that the DriveNets software stack could not only deliver the performance needed in telco and hyperscaler networks but could do it with a very attractive and predictable cost model. This is because additional servers can be added as more capacity is needed (and all the servers are viewed and managed logically as a single entity by the vendor’s management software) and DriveNets software licence costs do not (with the exception of some small or test deployments) go up as traffic volumes increase – a far cry from traditional pricing models.

Now DriveNets is firmly embedded in the AT&T network, a great shop window for the vendor because if the tech didn’t work, it would have been kicked out long ago – see AT&T takes critical step in building a new, open, disaggregated network.

And it’s clear plenty of other network operators like the look of the DriveNets stack: While the vendor hasn’t officially named any other customers, Japan’s KDDI has made it apparent it’s ready to deploy – see KDDI reminds us that open networking is about more than just the RAN.

Susan says it’s very difficult to get operators to go public, but he’s hoping to be able to name more customers this year. He says DriveNets currently has multiple revenue-generating customers that are managing hundreds of petabytes of traffic through the vendor’s platform,  and “very close to 100” network operator engagements, “most of which are Tier 1 service providers or cloud providers… It’s a long sales cycle, about two years once you get through the tests, lab trials, certification and contract [negotiations],” noted the CEO.

So DriveNets needs more people and more resources to deal with the growing interest in its technology: The company now has about 500 staff, about two-thirds of which are engineers, and is generating revenues in the tens of millions of dollars bracket, said Susan.

And having initially developed the core network routing stack, DriveNets has been expanding its product portfolio to develop virtualised functionality that suits multiple use cases. “Some customers are using us for the edge network, some are even using us for access aggregation. So we are not supporting all the features and functionality needed for the entire network, but we are expanding our use cases to support multiple networking workloads.

“The goal is to support whatever the customer wants to run… a VM [virtual machine] of compute and storage, peering, core routing, aggregation, edge functions for mobility or for enterprise, you name it… And this is what we have already demonstrated with multiple customers and we’re still working on our roadmap to expand [the portfolio],” stated Susan.

The company is also working on helping network operators to collapse multiple traditional network layers into a single platform. “We are converging technology, like Layer 1 and Layer 3, and then developing more functions, like the mobility PE [provider edge] or enterprise PE we’re currently working on. At the end of the day, we believe service providers will build these networks exactly like the cloud companies, like AWS and Azure building their compute and storage,” said Susan.

He added that the telcos don’t have the know-how or resources to develop the capabilities themselves, so “this is where we come into the picture… a lot of benefits are coming down the road but we are not promising and then not delivering. I don't want to say anything bad about competitors, but we are able to raise so much money with a very high valuation because we have very good revenue and growth because we're delivering and we’re focusing on execution.”

That focus on execution has helped DriveNets get where it is today, says experienced and respected senior principal analyst at Heavy Reading, Sterling Perrin.

“Looking back, you can plot what [the DriveNets team] said they would do against what they actually did, and they’ve been very good at executing. That helps in getting follow-on investments,” noted Perrin, adding that the company’s timing was good.

“Service providers identified disaggregation in the IP layer as extremely important in Heavy Reading surveys going back many years. DriveNets’s early and massive funding round back in 2019 put it on the right trend track, with a requirement to execute on its plan and keep up with its demanding Tier 1 customers. Support from AT&T was enough to get money flowing early on,” he said. “The speculation was that John Donovan’s retirement [in 2019] would end DriveNets’s AT&T run, as he was the initial champion. But they’ve held on and expanded within AT&T. This has all been good news for investors.”

Perrin believes the size and timing of the funding round herald further good news for the company. “The Series C round is massive and it’s more surprising given it already had a massive round in 2021. It’s very encouraging that the existing investors all came back in, so they obviously see enough positive momentum… but Tier 1s are resource hungry, so it looks like the additional funding is to ensure they can meet trial and commercial commitments to a growing customer base,” explained the analyst.

Barring any unforeseen hurdles, DriveNets looks like it’s going to become an established new-age tech supplier to the telco community, with Susan’s former employer, Cisco, as the company that will be affected the most by further DriveNets growth: The CEO says it is Cisco, and occasionally Juniper, that it usually goes head to head with for the business it is winning.

And does Susan expect other rivals to emerge now that cloud-native software and microservices are the way forward? Might the hyperscalers get in on the act? This wasn’t a topic the CEO seemed keen to get into but, ultimately, he admitted: “They have the people, they have the money and they have the know-how… I won’t fall off my chair if, in five years’ time, I see Azure or AWS going head to head with us.”

Of course, there’s always the chance that one of those companies might even see DriveNets as a useful acquisition. So what is the end game for DriveNets (and its investors, which will want a healthy return on their sizable funding)? Is it an acquisition? Like any good CEO of a private company, Susan said he doesn’t really think about it much: “I’m very focused on execution, winning more customers, creating more value for customers.”

But… “Ok, so it’s not that we never think about it… if someone came along with a very big cheque we would sit down and see what’s going on, and I don’t know when the market will get out of the challenges it has right now for IPOs, but if the market opens up again for IPOs and we are in the right position, then why not? And we can get another area to grow the company. But right now, it's our time to win more customers, generate more revenue and create more value for our customers and for our investors,” he said.

And what’s the biggest threat to his company’s future success? “Gaining the scale we need to support our deployments and all the POCs [proofs of concept] and delivering – this is a big, big challenge. And we need to continue to verify that we can deliver more and more innovation, and this is a big challenge when you have so much traction in the market – innovation must continue. And the other main challenge we're facing is, of course, talent. It's all about the people. I’m always looking for good talent and we are lucky to get very very good talent [but] we need more industry experts… money, as you can see, is not our problem right now,” laughs the CEO.