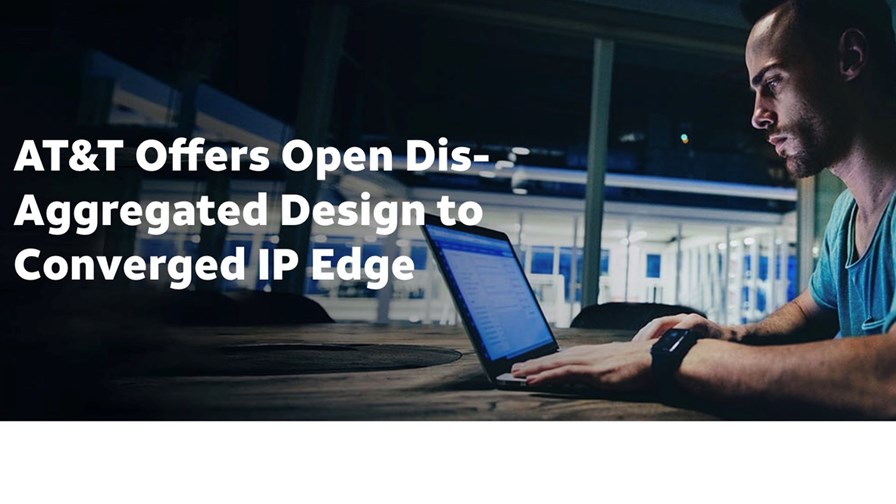 In the telecoms history books, the 2020s are likely to be seen as the decade when telecoms network architectures got overhauled, disaggregated, virtualized and opened up in a way that operators had only dreamed about previously, with ‘white box’ networking finally making its way from pockets of communications networks to spread across entire deployments, public and private.

AT&T has been one of the operators spearheading this move: It has been introducing standard server-based, non-proprietary hardware systems into its network for a number of years, and that process has now reached the edge router domain. Critically – and this is a story we’ve been hearing from Rakuten Mobile too – the deployment at the edge of AT&T’s IP network uses the same underlying hardware as is found at the IP core, where AT&T has already deployed disaggregated systems.

That’s important because having the same hardware simplifies operations and procurement processes, reduces complexity in many ways (including testing) and adds economies of scale (in addition to making it easier to source and deploy alternative, best-of-breed software suppliers).

That’s perhaps why AT&T’s CTO, Andre Fuetsch, describes the deployment of disaggregated IP edge systems in the operator’s production network as “a really big development in the networking ecosystem.” The full details of the deployment, and Fuetsch’s other comments, can be found in this press release, but it’s interesting to see how this is the next step in what has been a very deliberate network architecture upheaval for AT&T.

The AT&T technology team, initially under John Donovan, spent years pushing the vendor community hard for truly virtualized applications that could run on white box servers and, along with many other operators, it had to push hard and made progress, but not as fast as it would like.

But once the door was open, new entrants appeared. In the case of the IP routing sector, one of those new entrants was Israeli vendor Drivenets, which developed cloud native routing software that could deliver very high throughput on servers running Broadcom’s Jericho processors.

A few years of tests and trials resulted in the deployment of DriveNets in AT&T’s IP core network. That in itself is a big deal: The IP core has traditionally been the domain of a few major traditional integrated system vendors – Cisco, Juniper and Nokia/Alcatel-Lucent – and yet here was a startup forcing its way into one of the most important communications networks in the world.

Now AT&T has extended this open networking model to the edge of its IP network, using the same white box hardware from UfiSpace and Broadcom’s Jericho2 chips, but this time the software comes from Cisco… this, surely, is a clear sign of a massive shift in the industry. Cisco’s IOS-XR Network Operating System software is running on non-Cisco hardware and, in this first instance, is being used for peering, connecting AT&T’s network with other ISPs.

“But this is just the tip of the iceberg; we are working with Cisco on developing additional edge use cases that will include broadband, IP content, Ethernet, mobility, and VPN services. We have started the journey to converge the disparate edge implementations we have today onto common software and hardware driving uniformity, simplification, and agility,” noted Fuetsch in the press release.

What he didn’t say explicitly, but which is of major importance, is that Cisco is just one routing software supplier that AT&T might use… Cisco has the customer relationship and an incredible heritage in IP networking, but now it has to innovate and deliver functionality at AT&T’s pace and be equal to all of its rivals, otherwise it could get swapped out.

Here’s what AT&T’s CTO did say, though, which is more diplomatic: “This model gives us options and flexibility in our supply chain and enables us to use best-in-breed products whether they come from established or disruptive suppliers. And this is well past lab experiments; the technologies and eco-system have matured, and we are now into the production deployment phase.”

That is great news for innovation in telecoms. And guess what? This is also exactly what’s happening right now in the radio access network, dominated currently by pre-integrated systems from Ericsson, Huawei and Nokia. But Open RAN has caught the imagination of the world’s mobile operators and the white box sector is ready to develop the hardware that can run at the edge of the mobile network.

Fuetsch is all over this too, of course: He is the current Chairman of the O-RAN Alliance and AT&T is one of the major operator names seeking to get other operators on board the Open RAN train.

Find out what Fuetsch has to say about Open RAN and AT&T’s disaggregated radio access network plans in this executive interview with TelecomTV, part of our Open RAN Summit programming.