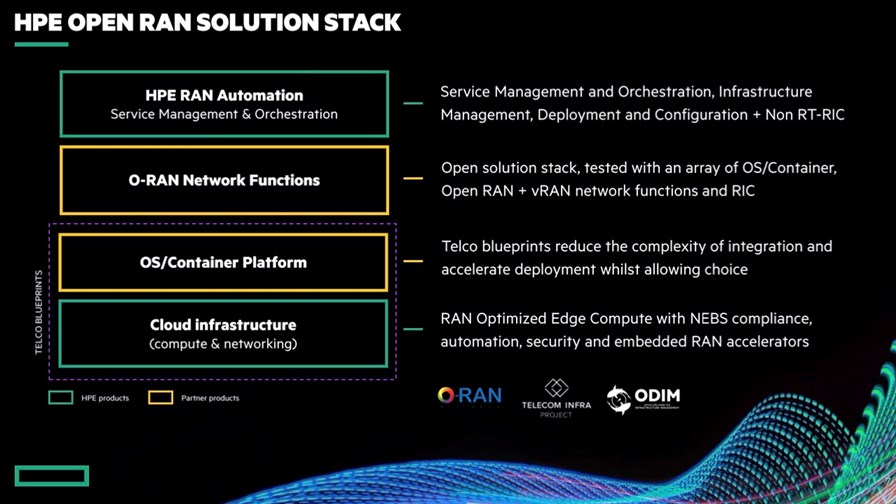 Hewlett Packard Enterprise (HPE) has launched its RAN Automation suite of software, which aims to help mobile network operators embrace zero-touch, automated network operations in their existing as well as virtual or open radio access network deployments. RAN Automation, which follows the Service Management and Orchestration (SMO) architecture specifications developed by the O-RAN Alliance, is being offered as a managed ‘as-a-service’ solution that can run in either private or public cloud platforms.

The aim of HPE’s Communications Technology Group (CTG), which has 5,000 R&D staff developing products for the telecoms sector, with this launch is to help operators more efficiently run their networks while also helping them as they introduce virtual RAN (vRAN) and Open RAN sites as part of their network portfolios: While some early, high-profile Open RAN deployments have been ‘greenfield’ networks, most will be ‘brownfield,’ rolled out alongside and as additions to existing, traditional systems, so operators will be seeking support software that can manage a mix of systems from multiple vendors and have a single system to manage everything. Tom Craig, VP and General Manager of HPE’s CTG, stated during a media briefing on the launch that a “key deliverable is backwards compatibility – 3G, 4G, 5G under the same management architecture.”

It’s also key to operators that greater levels of automation are introduced into the management processes to be able to efficiently manage complex and distributed multi-technology networks, and this is what HPE appears to have taken into account with its product development.

For network infrastructure management, the suite includes the vendor’s Resource Aggregator for Open Distributed Infrastructure Management tool, which is describes as an “open-source framework to manage diverse edge infrastructure.”

Stefano Capperi, Service Assurance and RAN Automation Portfolio lead at HPE, noted that the first release of the software will focus on infrastructure management to “configure and optimise the workload of the software at the edge.” He noted that HPE has already been working with one unidentified national Tier 1 operator to help with the infrastructure management and orchestration capabilities needed to “deploy and automate the lifecycle of the hardware and software at the edge of the radio access network.”

Then, as O-RAN specifications mature, the suite will include the AI elements and standardized interfaces to offer O-RAN compliant non-real-time RAN Intelligent Controller (RIC) functionality and “host a suite of radio network applications (rApps) from HPE and partners.” The vendor says initial deployments will include a radio frequency (RF) configuration and optimization module. This is all supported with continuous integration and continuous delivery (CI/CD) practices to “ensure that HPE RAN Automation is constantly updated according to the latest O-RAN standards and integrates seamlessly with the latest software updates from RAN partners.”

The details of what HPE is addressing with RAN Automation can be found in this press release: The suite is available for early trials and proofs of concept and will be commercially available by November this year, which is the end of HPE’s fiscal year.

Craig is (as you’d expect) bullish about HPE’s prospects with this new offering as, while the industry has been talking about automation for years, there is little in the way of meaningful implementation. He noted during the media briefing that there’s a lot of work to be done to introduce automated processes into telco operations, and cited GSMA research that suggested about 60% of mobile operators have no automation implemented at any scale, which means “there is a huge amount of manual overhead in how the business models of the sector still run. And I can testify to that,” added Craig, who has previously held executive roles at BT Global Services and Vodafone Group, and prior to joining HPE last autumn was working as a consultant for operators such as Ooredoo, Millicom and Tele2.

“Some simple tests of looking at the lead-to-cash times for new product launches in the sector, at standard lead times, and at provisioning times will tell you the businesses are still largely run and operated on manual processes,” he noted. “For us, above everything we do at CTG, automation is the number one deliverable we'll bring to market... how do we take the three main carrier processes – trouble ticket to repair, lead to cash, new concept or product to market – and how do we do it in a digital end-to-end manner, which is table stakes for survival and the thinking driving future viability” within the telecom sector, he noted.

The RAN Automation product is the latest in HPE’s launches for mobile operators and to address Open RAN deployments in particular: The vendor previously announced its Open RAN Solution Stack, which included the orchestration software from its 5G Core stack and an Open RAN-optimized server, the ProLiant DL110 Gen10 Plus, which Craig says has proven very popular with telco customers.

Basically, HPE is looking to play to its strengths by providing network operators with its server hardware and the various software elements that will enable those operators to manage their distributed and disaggregated radio access networks, while teaming up with specialists that have developed the radio head units, the virtualized RAN software and the applications that will run on the RIC.

But, of course, it has plenty of competition from the likes of IBM, Dell and the major OSS vendors, as well as the traditional RAN vendors – Ericsson launched its SMO, the Intelligent Automation Platform, in November last year. It’s still early days in Open RAN, but the big names are starting to turn up the heat as operators move slowly but surely towards hybrid network architectures that comprise traditional, virtualized and open network elements.