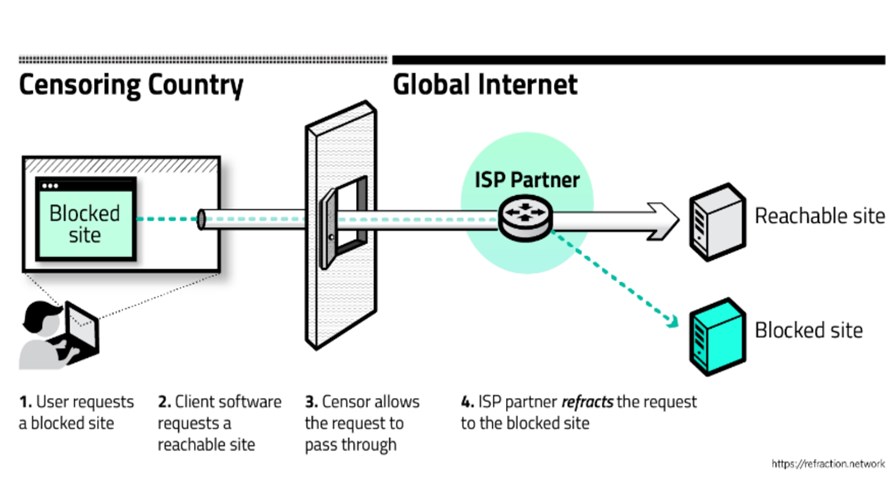 A team of engineers and researchers claims to have been “quietly working” for two years developing  a new technology to prevent state actors blocking users from sites and content they don’t like on the Internet. It says the technique - Refraction Networking - is a high-performance implementation of the TapDance refraction networking scheme, has been the subject of a large-scale trial (50,000 users for more than a week) and that the group has trial results it’s pleased to share.

The developers point out that up to recently, those at the Internet edge usually had the advantage over those controlling the core when it came to anonymity because through most of the Internet’s history the core has been relatively ‘stupid’ and slow to change while users at the edge could selectively apply all sorts of tricks to access the network they way they wanted to -  things like proxy servers, VPNs and end-to-end encryption has provided security and anonymity for those who wanted or needed it.

But for reasons both technical and political, that imbalance of power has turned around. Now states have the technology to block sites that displease them and they’re not afraid to use it.

Backbone networks, says the refraction networking group, “are no longer the ‘dumb pipes’ they once were: Censors can now inspect the data crossing their borders in real time, in increasingly subtle ways, to detect and prevent circumvention efforts. Strategies that rely on endpoint proxy servers are failing against increasingly sophisticated state-level censors, who can see and control a country’s entire network.”

As a result, a majority proportion of the world’s internet users are now being constrained over what they can read or access online, it’s claimed.  The group quotes Freedom House which estimates that “two-thirds of Internet users worldwide are now at risk of being punished if they speak out online about the government, military or ruling family in their country.”

Find a technology fix to redress the balance of course. Rather than trying to hide individual proxies from censors, the refraction networking approach is to bring proxy functionality to the core of the network and spread it about over multiple participating ISPs. The system allows any encrypted data exchange between a censored nation’s Internet and a participating friendly network to become a conduit for the free flow of information (see diagram).

As a result, the censoring actors don’t know how to spot the offending exchanges (hopefully) and if they do, have no way of selectively blocking the offending servers. All they can do is try to block all the ISPs supporting the  technique, which makes blocking a sort of nuclear option which could see most of the Internet chopped off from the country concerned.