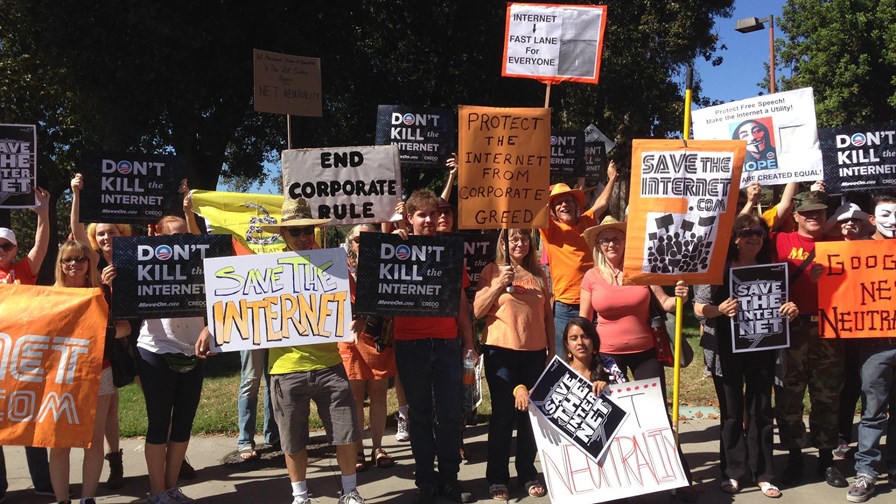 Yesterday, September 10th, was Internet Slowdown Day (see - US prepares for Internet slowdown day) and on cue many of the biggest US sites - including Netflix, Vimeo, Twitter and Mozilla - simulated slowing performance by displaying the spinning stalled video wheel on their sites to remind users of the net neutrality issue.

Amongst those reminded appears to have been Google. You thought the Cookie Monster had been right on in there stoking the issue?  Not at all. In fact Google’s relative silence over net neutrality these last several years had lead many to wonder whether it was preparing for a change of heart.

After all, a business strategist might be able to build a case that Google could benefit from the end of net neutrality since upstream charging by ISPs might blunt entry by newcomers. Newcomers who might threaten Google’s various positions. Certainly, Google is now in the access network business by building out Google Fiber (although still only embryonically). Perhaps it’s starting to see the world from a slightly different position?

As the FCC asked for public content on Net Neutrality and Slowdown Day approached the pressure to fall into line and shout about net neutrality has proved too much and Google has finally weighed in and reaffirmed its allegiance with a ‘Take action with Google’ page and a promise to keep interested parties up to date with net neutrality  legislation and developments.

“We believe that consumers should continue to enjoy open on-ramps to the Internet.

That means no Internet access provider should block or degrade Internet traffic, nor should they sell ‘fast lanes’ that prioritize particular Internet services over others. These rules should apply regardless of whether you’re accessing the Internet using a cable connection, a wireless service, or any other technology,” runs part of its message.

So why, up until this point, hadn’t Google been a more visible advocate for net neutrality?

I think it was having a David Cameron moment.  That’s when your intervention on an issue (in David’s case Scotland’s independence) is a greater help to your enemies than it is to your cause.

Google made a major misstep about four years ago when it was reportedly asked by the FCC to go off with Verizon and come up with some sort of compromise solution to the net neutrality question. The resulting ‘solution’ left mobile operators off the neutrality hook, on the basis that they had to manage their networks more carefully than fixed providers.

There were predictable howls of ‘Judas’. Google’s net neutrality credentials, previously impeccable, were tarnished amongst activists and remain so to this day.

But despite this, Google has also remained top of the hate pile for net neutrality opponents: especially in Europe where the narrative places net neutrality as a Google invention alongside search. In this version net neutrality was devised so that Google could continue to make vast amounts of money from advertising without being forced (by access providers) to share it around.

Perhaps Google could have changed its slogan, from ‘Don’t be Evil’ to ‘You just can’t win’.

The fact that it had participated in the shameful Verizon episode confirmed, for net neutrality supporters, that Google was just another big corporate capable of adopting any ‘line’ to suit its immediate business imperative - in this case the suspicion (well founded) was that it had to  ingratiate itself with Verizon in the interests of establishing Android (not quite on top at the time). For pro-NNs the move was an arrogant stab in the back just because net neutrality was never Google’s to parlay in the first place.

So for Google, net neutrality advocacy turned out to be counter-productive: to the anti NNs Google’s harping on would simply prove that it was a commercial racket. To the pros it would have been a reminder that Google thought it owned the concept and had tried to trade it in.

Hardly surprising, then, that Google decided to pipe down and let others make the running.

As with Cameron though, the pressure seems to have built, the spotlight has burned brightly and the Cookie Monster has at last reaffirmed its fealty.  You can read its full pledge here.