FCC Chairman: "We have met the enemy and it is free data" 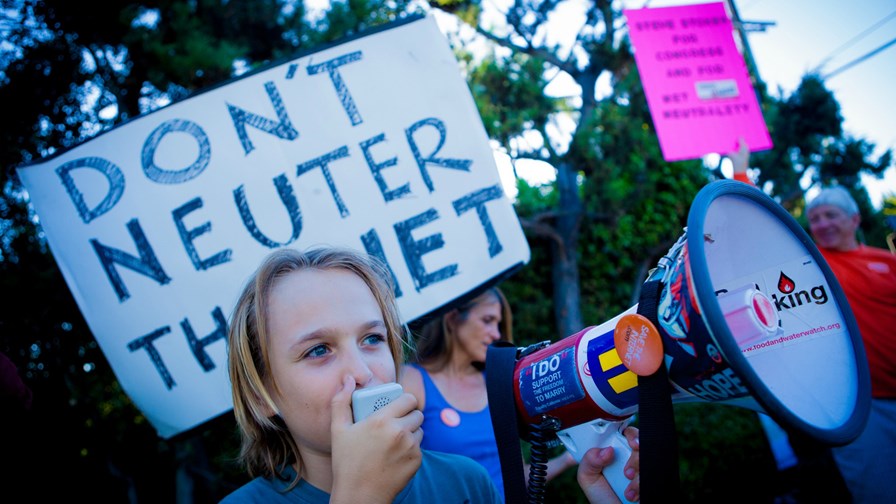 Last year the US regulator, the Federal Communications Commission (FCC) voted to rescind the net neutrality protections debated and constructed over the course of the administration of President Barack Obama and implemented in February, 2015. Some 29 individual American states, including California, Hawaii, Montana, New York, Oregon, Vermont, and Washington, vowed to fight back and promised to introduce their own net neutrality regulations to re-instate what they describe as "fair and open access to the Internet."

By far the toughest new net neutrality rules have been proposed by California. So radical are they that, when and if passed, they would be even stronger than erstwhile national regulations voted down by the currently Republican-packed Board of Commissioners of the FCC. California's determination seems to have pushed Ajit Pai, the Chairman of the FCC, over the edge.

So angry is he at the perceived lèse-majesté of the liberal upstarts of the California State Legislature that he has abandoned all notion of public civility and open-handedness that his role is supposed to embody and has resorted to a foot-stamping tantrum.

Addressing an audience at the Maine Heritage Policy Centre in Portand, New England, Mr. Pai said, "Last month, the California state legislature passed a radical, anti-consumer Internet regulation bill that would impose restrictions even more burdensome than those adopted by the FCC in 2015. California’s micromanagement poses a risk to the rest of the country".

He went on to say that individual states of the Union cannot pass laws to regulate broadband and traffic across the Internet. This is his thesis: "Internet traffic doesn’t recognise state lines. It follows that only the federal government can set regulatory policy in this area." Pai seems to forget that from 1861 to 1865 Americans fought a terrible civil war over states versus federal rights.

So, according to the Chairman, California's proposed legislation is both "illegal" and "anti-consumer". What's more it is a blatant attempt by a "nanny-state" to destroy consumer rights. If Mr. Pai considers California to be a 'nanny state' he should walk up and down Market Street in San Francisco or ride on the Bart subway system and take a look at number the homeless beggars and the transient mentally deranged individuals who have been turfed out of residential facilities and left to fend for themselves.

What is giving Mr. Pai the vapours are two bills awaiting final approval in California's Assembly and Senate. One bill would stop ISPs from throttling bandwidth to slow down website traffic in general and video streams in particular and also charging users higher prices to receive faster, preferential service speeds. The other would prohibit those service providers, carriers and telcos that ignore the new regulations from bidding for, and being awarded, any public contracts.

California is Democrat-controlled but has found that passing the legislation has been harder than expected because big guns of the comms industry have been pouring money into intense lobbying campaigns against the changes. Californian consumer and Internet freedom advocacy groups, not having the bottomless pockets of the vested interests. have responded with noisy and eye-catching street demonstrations and local agitation to keep their cause well and truly in the public eye.

Evan Greer, of the net neutrality organisation, Fight for the Future says, "If California can’t pass net neutrality protections, opponents will use it as fodder to kill any net neutrality efforts at the federal level moving forward', adding. "[but] if the bill passes, it would create the gold standard for other states to follow suit.”

As is only to be expected, ISPs and telcos contend that success of the proposed California legislation will have a knock-on effect in other pro-net neutrality states that will inevitably lead to the introduction of a mismatched patchwork of competing and contending state and federal laws that will take many years, massive litigation and countless millions of dollars to rationalise.

What is being waged in California is a major battle in a proxy war to determine the the way the Internet will work and be made available in years to come and what is particularly exercising Pai and the big, established telcos and ISPs is California's attack on what is called "zero-rating", the mechanism by some which ISP broadband subscribers are allowed to access certain selected websites, content and applications without that access being added to any monthly data cap that any particular bundled package provides (at a cost, of course).

The trouble with zero rating is that it is almost always used solely to promote the services and apps that the ISPs themselves provide or by organisations that pay the ISPs to market them. In other words all the publicity, marketing and advertising hype that ISPs and telcos lavish on zero rating simply obscures the fact that it is, by definition and in actuality, preferential treatment and fast lane Internet access in action.

The proposed California bills would not explicitly prohibit zero rating but, by outlawing anti-competitive actions or ISPs and telcos giving preferential treatment to any particular websites of applications, it would have the same effect. Ajit Pai is implacably opposed to any regulation that would affect zero rating.

At the Maine meeting he said, "These plans ... have proven enormously popular in the marketplace, especially among lower-income Americans but nanny-state California legislators apparently want to ban their constituents from having this choice. They have met the enemy, and it is free data."

Meanwhile, back in the Golden State itself, two Senators, Scot Wiener, a San Francisco Democrat and Kevin de León, a Los Angeles Democrat, are combining their forces to fight the FCC and say that their plans for zero rating "will ensure that we all get to decide for ourselves where we go on the Internet, as opposed to having internet service providers tell us where we are allowed to go." Scot Weiner added that the Californa proposals will "protect open Internet access, the free flow of information, and innovation."

Meanwhile, the CTIA, the not-for-profit trade association that represents the interests of the US wireless industry, has issued a statement that takes exception to the "flawed" California bills and says that by "banning cost-saving programs that consumers have come to rely on [the proposed legislation]... will jeopardize the benefits of technology in the state and lead to increased costs for Californians."

California's efforts to reinstate net neutrality were recently boosted when it was revealed (tucked quietly away in the small print addendum to a federal lawsuit) that Verizon had throttled the speed of the wireless Internet service supplied to the Santa Clara Fire Department even as the force was fighting a massive blaze, the Mendocino Complex, an immense conflagration and the biggest ever recorded in California. It covered some 410,000 acres, destroyed 157 homes and 123 other buildings and killed a firefighter.

Responding to the revelation in the lawsuit and the avalanche of bad press that resulted, the General Counsel of Verizon, Heidi Barsuglia said, "This particular situation has nothing to do with net neutrality. Net neutrality addresses content discrimination. This was content neutral.” According to Verizon, the speed restrictions were a "customer service mistake that the telco is investigating. That's alright then.