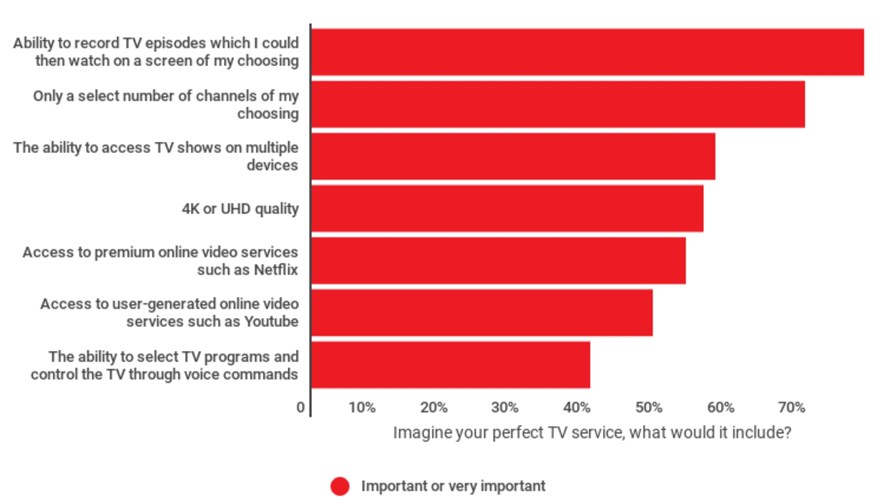 Some analysts have been predicting the steady replacement of Pay TV by so-called OTT video for around a decade now, but while there is certainly a marked trend to so-called cord-cutting (in the US especially) there has been nowhere near the movement many were expecting.  Instead, both OTT and Pay TV have been strengthening their respective grips (though OTT has been growing the faster).

Ovum, which has been pondering what it calls multiplay purchasing drivers in the UK, has found that while service bundles remain popular here, they clearly don’t address the viewing needs of younger audiences. The OTT video that they might naturally be drawn to is not yet being added to bundles. This, according to Ovum analysts Jonathan Doranand and Ed Barton, has “driven audiences to collate these services themselves, often augmenting rather than replacing traditional pay-TV subscriptions.”

In effect, younger household members take out a subscription to, say, Netflix, themselves which they then proceed to watch in private or on the move most of the time. On rare occasions, if their technology allows it, they can cast the video or film to the family television for a joint viewing session

It will be interesting to see if this ‘personalised’ bundling grows as the end-user technology and the prevalence of functions like Google’s Chromecast become more pervasive. Alternatively, bundlers might start including out of bundle OTT services to solve the mismatch that way.

Given all these factors, Ovum thinks providers are now set to attract audiences who don't currently buy a bundle by offering what it calls ‘evolved bundles’ made up of fixed and/or mobile broadband with a bouquet of carefully selected OTT services showing up as part of the bundle.

Ovum says it’s all indicative of an industry in transition; service providers are attempting to address the current fragmentation in TV and video sources by aggregating and bundling relevant third-party OTT services. It is no longer possible for one provider to address a given society's broad and diverse viewing needs on a proprietary basis.

"OTT video is a key part of the modern viewing diet, and it is a natural progression for service providers to include relevant services in their  offerings, Doing so effectively is critical to the longer-term health of the multiplay bundle." says Ed Barton, Ovum's TV practice leader.

"We expect to see tighter integration of third-party OTT video in pay-TV UIs, moving away from the current model of distributing someone else's app and toward the tightly integrated paradigm demonstrated by Comcast and Netflix in which service provider functionality, such as voice search and control, is applied equally to Netflix and Comcast content," he continued.

Ovum says it expects OTT video to be an increasingly common component of multiplay service bundles, either as an augment to pay TV or, in some cases, as an alternative to pay TV either via pure OTT or by augmenting a free TV service. The level of integration into the pay-TV UI and the extent to which service provider functionality will be applied in varying degrees is dependent on the service provider's commercial strategy and the capability of their infrastructure to enable integration of partnered services, it says.