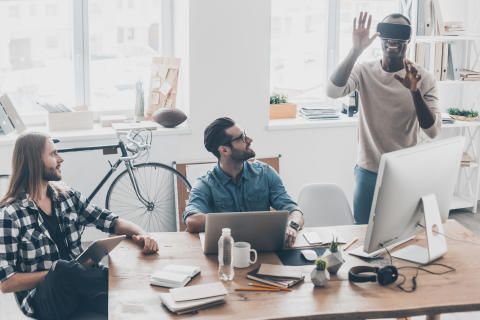 IT decision makers are divided about the impact of disruptive technologies such as AI and automation – the so called ‘Fourth Industrial Revolution’ - on the labour market, according to new research from BT.

Contrary to many reports which speculate about widespread job losses, one third of organisations surveyed who plan to implement AI and automation within the next two years believe it will create more jobs within the workplace. This reflects the view that AI will generate new opportunities for programmers, algorithm designers and software engineers and create new job categories such as AI trainers, ethicists and lawyers.

However, the same proportion predict that these technologies could result in job losses in their organisation, given concerns that innovations in robotics and intelligent computer systems may eventually replace jobs traditionally done by humans, particularly those of a manual, repetitive nature.

Around one in three IT decision makers are planning to invest in AI and automation over the next two years, suggesting that businesses and organisations across the country are gearing up to embrace these technologies in the near future. Of these, 62 per cent believe that their organisations will be more effective as a result.

The UK public sector also appears to be benefitting from the early adoption of disruptive technologies.* 95 per cent of organisations that operate within the UK public sector are already using at least one form of disruptive technology, compared with 85 per cent of businesses operating in the private sector. Furthermore, almost half of organisations operating within the pubic sector have implemented big data analysis, while 42 per cent of those operating in the private sector are using this technology to date.

IT security concerns remain one of the biggest barriers to the adoption of AI and automation. 44 per cent of organisations operating within the public sector believe that greater automation will leave their organisation open to cyber-attacks, compared with 28 per cent of those operating in the private sector. Within the private sector, larger organisations are the most concerned about the impact of AI, with 40 per cent identifying as it as the technology they consider to carry the most risk over the next two years.

“This research gives us a fascinating insight into the early adoption of AI, automation and other disruptive technologies in the UK workplace. The findings illustrate the rapid pace of technological change amongst organisations of all types and sizes.

“And while some organisations clearly view disruptive technologies as a potential threat to the labour market, we believe the introduction of new automated technologies and business processes will play to the strengths of both people and machines.

“A good example of this is where BT’s world leading security team is using Machine Assisted Cyber Threat Hunting to proactively identify cyber security threats. This combines AI and big data techniques with the use of human analysts who are critical in providing the context and judgement needed to distinguish between anomalous and malicious activity.”

BT’s Machine Assisted Cyber Threat Hunting technology will be on display at this year’s Innovation Week event at the BT Labs in Adastral Park, Ipswich which is being held from 12 – 16 June. This combines AI and visual interfaces for identifying and understanding cyber security threats from petabyte-scale data. BT will present its latest work in the field of Visual Analytics, where a machine based analytical pipeline has been developed to automatically identify anomalous events on the network which look suspicious. BT’s security analysts then use interactive and visual tools to understand the AI reasoning in more depth and can drill-down on the data in order to verify the result. This allows analysts to identify advanced security threats more quickly, with a fraction of the effort and with less specialist training.

BT has been using AI for many years both in its products and services as well as in its systems and networks. The business was the first telecommunications provider in Europe to use AI techniques in workforce scheduling in the 1990s, to maximise the efficiency of its workforce. Since then, the use of AI has been extended across workforce and resource management in BT, which has received a number of awards for this innovative work. BT has also used AI in other areas such as automated network design, process optimisation, cyber-security threat detection and ‘nuisance call’ detection.

BT’s R&D programme is now employing the latest in deep learning networks (deep neural networks) in a range of applications which will help the business transform its products and services and the way it manages it networks and operations. To this end, BT has partnered with many of the world leading universities, such as Cambridge and MIT, to ensure it stays ahead in the application of AI.