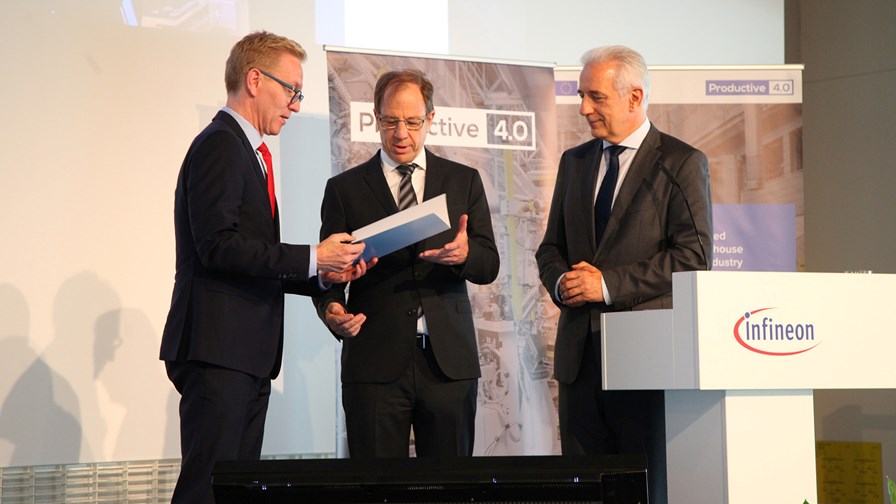 German semiconductor firm Infineon Technologies has launched what it says is the largest European research initiative to date in the field of Industrie 4.0. Along with more than 100 partners from 19 European countries, Infineon hopes to coordinate work on the digitisation of the manufacturing industry, in what it calls “Productive4.0”. Involved in the €106 million project are partners including BMW, Bosch, Philips, Thales, NXP, STM, SAP, ABB, Volvo and Ericsson, as well as leading institutes such as the Karlsruhe Institute of Technology, the Fraunhofer Gesellschaft and the TU Dresden.

“Real-time connected value chains will dramatically increase agility in development and production and will thus help shorten time to market,” said Reinhard Ploss, CEO of Infineon Technologies. “Microelectronics is a key enabler for further digitisation of the manufacturing industry and for an optimised and integrated supply chain management. With its high level of automation, our industry can serve as a blueprint showing how to secure important parts of the value chain and qualified jobs in Europe. We now want to share our know-how with other industrial sectors.”

Europe and, in particular, Germany have special strengths in the field of microelectronics in automotive, energy, safety and industrial electronics. Productive4.0 is part of ECSEL (Electronic Components and Systems for European Leadership), the European funding programme for microelectronics. Its aim is to strengthen expertise in microelectronics with a view to broad digitisation. Thirty partners from Germany and a further 79 participants will collaborate for three years. The EU and the participating Member States are funding the project as part of ECSEL with around €51 million, with local government contributing a further €9.6 million.

“Germany has cutting-edge expertise in microelectronics,” said Prof. Wolf-Dieter Lukas, Ministerial Director at the German Federal Ministry of Education and Research (BMBF). “This is a strength, which we can leverage and have to leverage for the implementation of Industrie 4.0. This is exactly what we are doing with the new project, Productive4.0 – we are strengthening the semiconductor industry and at the same time boost the broad implementation in various industry sectors across Europe.”

The aim of the project is to create a user platform across value chains and industries, that especially promotes the digital networking of manufacturing companies, production machines and products. The participating partners will examine methods, concepts and technologies for service-oriented architecture as well as for components and infrastructure in IoT. The platform can be used for managing the supply chains, the product life cycle and digital production. The Productive4.0 project will run until April 2020.

“Productive4.0 is one of the first Lighthouse projects funded under ECSEL,” said Max Lemke, of the European Union’s Directorate General for Communication Networks, Content and Technologies. “The platform approach and the collaboration across value chains and sectors, which is strongly promoted in the Digitising European Industry strategy of the European Commission, promises sustainable impact on the collaboration between and across companies in production and beyond.”