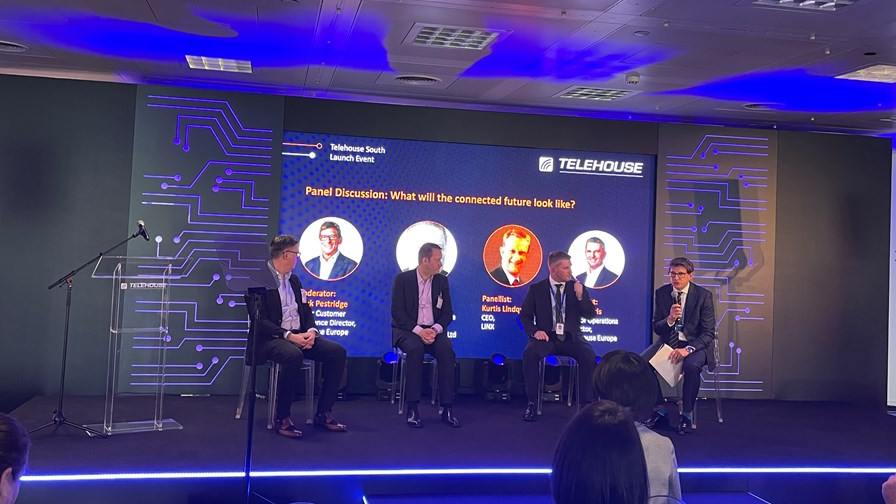 Panel discussion at the opening of Telehouse South in London.

Telehouse Europe is looking for ways to boost the security and energy efficiency credentials of its data centres and is harnessing the power of various cutting-edge technologies to achieve its goals.

The company has highlighted environmental sustainability as a top priority for its operations: Senior operations director Paul Lewis (third from left in the picture above) explained during the recent launch of the Telehouse South facility in London that the company is trialling an interactive monitoring tool using 3D modelling software to track airflow in real time.

He said the system produces an algorithm that provides information about which of the cooling units are not performing well enough and where adjustments can be made. The system will be deployed at the company’s oldest London facility, Telehouse North, in a month’s time.

The company will also be looking to deploy the system across its other data centre estates but has chosen the North building as a starting point due to its age (it has bene open for 32 years).

Lewis explained that Telehouse also collaborates with its co-location customers about equipment and airflow management “to drive that right level of efficiency and to get [the] PUE [power usage effectiveness] level as low as possible.”

“As we go forward, we’ll be looking at the right level of investment, the right cooling plans and to put the right measures in place operationally for how our customers deploy their equipment,” the executive said.

For the company’s newest data centre, which opened its doors in London last week, he said the company is working with design consultants to drive “the right levels of sustainability” in the second phase of its development. (See Big in London: Telehouse splashes more than £223 million on revamped data centre.)

It also plans to switch the current back-up generators with more energy-efficient ones, as the company is “on a constant refresh and lifecycle replacement programme, looking at our equipment and replacing it,” Lewis said.

The company states that all of its five facilities in London, alongside the three data centres it runs in France, are powered by 100% renewable energy generated from certified wind, solar, biomass and hydro generators. It has also been recognised as an ‘ultra-small emitter’ under UK’s Emissions Trading Scheme.

Telehouse is also trialling AI and robotics with numerous partners to put its connected management systems together and achieve a more “automated output,” so that it provides more seamless services. “And, from the business side of it, I can drive better efficiencies, because we’ve seen with energy costs and everything else, we need to try and be as efficient as we can. That helps us as a business, helps our customers and helps the sustainability aspects, which is key for us,” Lewis argued.

Advanced AI and automation tools are also being increasingly deployed to boost the security of the company’s data centre facilities.

One of the key drivers for the company’s increasing drive for better environmental credentials is that customers are increasingly demanding to see such metrics. A report from November 2021 conducted among 250 UK enterprise IT decision-makers showed that 93% of respondents view sustainability as a key factor in their organisation’s IT maturity aims.

Edge computing and colocation are seen as the most sustainable infrastructure models, with companies in the manufacturing and retail sectors placing the highest importance when it comes to sustainability. As a comparison, cloud-only and hyperscale models were seen as the least sustainable which, according to Telehouse, does not come as a surprise as “centralised infrastructure models can consume a lot of energy and produce a lot of carbon emissions with high volume of data traversing networks.”

The number one driver of investment in colocation services is flexibility (38%) but sustainability has scored quite high in the past year, getting 36% votes by those surveyed as they increasingly feel pressure to reduce their carbon footprint.

“The results of previous Telehouse research indicated that sustainability was not a top factor when choosing a data centre supplier, however, this suggests that organisations are increasingly recognising the positive steps taken by the data centre industry to become carbon neutral and improve sustainability and are leaning on outsourcing more to improve their own credentials,” the company noted.

As demand for data centre services is increasing, driven by ever-increasing data consumption, it’s only natural that concerns about the environmental impact of such facilities will grow stronger and the focus on such metrics, and how they can be controlled and measured, grows stronger. (See How many hyperscale data centres does the world need? Hundreds more, it seems.)