How many hyperscale data centres does the world need? Hundreds more, it seems 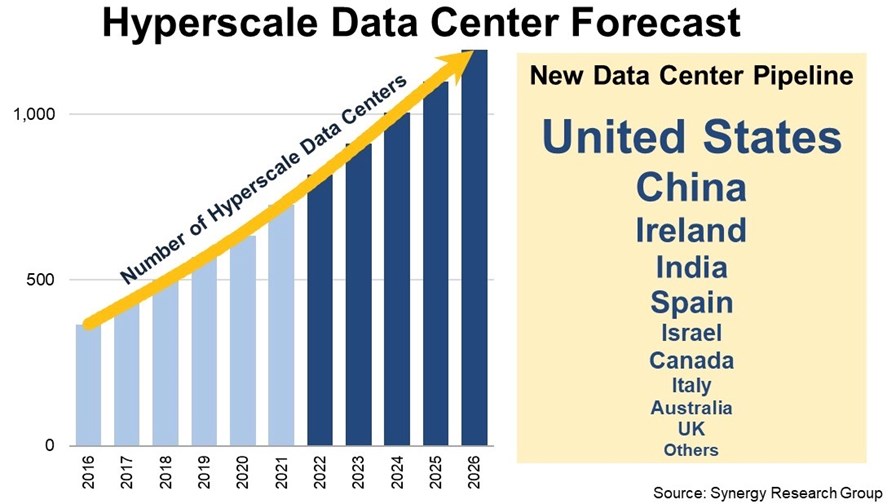 There will be no let-up in the expansion of the hyperscale data centre sector during the next five years, with the number of such facilities set to top the 1,000 mark within three years and reach 1,200 by the end of 2026, according to a new forecast from the team at Synergy Research Group.

At the end of 2021 there were 728 hyperscale data centres in operation globally, according to the research firm, with 314 new facilities planned: Fulfilling that pipeline will take the global total past the 1,000 mark by around the end of 2024. “Factoring in many new data centre plans that will be announced over the next two to three years, we forecast that by the end of 2026 there will be an installed base of nearly 1,200 hyperscale data centres around the world,” notes John Dinsdale, a Chief Analyst at Synergy Research Group, in an emailed note to journalists.

The companies most prominent in the current pipeline of new data centre launches are Amazon, Microsoft, Facebook and Google (though Facebook, now known as Meta, appears to having issues with one of its planned facilities in The Netherlands.)

The US is still the hub of activity: It currently accounts for about 40% of all hyperscale data centres in operation and “is by far the most common location” for those in the pipeline, followed by China, Ireland, India, Spain, Israel, Canada, Italy, Australia and the UK, as the chart above shows.

Dinsdale also notes that the Middle East is now also starting to feature in plans, whereas it had not featured much in past activity.

And not only is the number of these giant facilities growing, but so is their capacity. “As the installed base of operational data centres continues to grow each year at double-digit percentage rates, the capacity of those data centres will grow even more rapidly as the average size increases and older facilities are expanded,” notes the Synergy research team in a press release about its findings.

As you would expect, the companies with the greatest number of data centres are Amazon, Microsoft, Google and IBM, each of which has 60 or more locations, with at least three in each of the four regions (North America, APAC, EMEA and Latin America): Oracle, Alibaba and Tencent also have “a notably broad data centre presence,” notes the research firm.

In terms of data centre capacity, Amazon, Microsoft, Google and Facebook are the leaders, “though it is the Chinese hyperscalers that are growing the fastest, most notably ByteDance, Alibaba and Tencent.

“The future looks bright for hyperscale operators, with double-digit annual growth in total revenues supported in large part by cloud revenues that will be growing in the 20-30% per year range. This in turn will drive strong growth in capex generally and in data centre spending specifically,” noted Dinsdale. “While we see the geographic distribution, build-versus-lease distribution, average data centre size and spending mix by data centre component all continuing to evolve, we predict continued rapid growth throughout the hyperscale data centre ecosystem. Companies who can successfully target that ecosystem with their product offerings have plenty of reasons for optimism,” he added.