Telefónica is top of the telco sustainability class, says STL 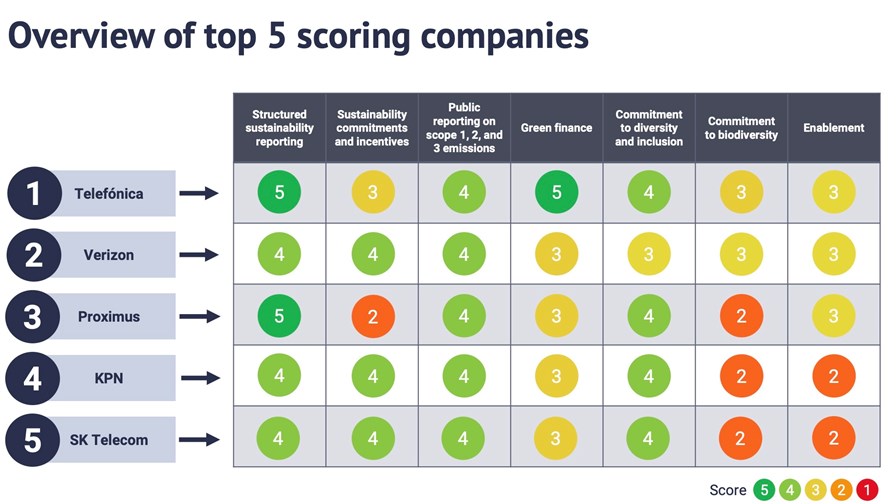 STL Partners has identified the top five big-name telcos in terms of their sustainability credentials, with Telefónica coming out on top, but emphasised the industry still has a long way to go to operate in a more sustainable way.

In a freshly published scorecard, the telecoms consultant put the Spanish operator at the top of the telco class as it scored well across multiple criteria: Telefónica was particularly recognised for its structured sustainability reporting and its ‘green finance’ agenda. (See Telefónica, VodafoneZiggo, Millicom walk the sustainability walk.)

The STL Partners team assessed a total of 45 companies, looking into the ways they perform against seven sustainability-related metrics. Specifically, it put to the test a total of 36 telcos, seven technology companies and two passive telco infrastructure companies (Cellnex and American Tower).

Overall, STL estimated that, in general, companies with a global footprint are more likely to have mature sustainability strategies. As such, 64% of the assessed enterprises that were in the top 20 scores for sustainability had a global scope of operations, followed by EMEA-based ones with 54% and North America with 33%. Of the companies operating only in the APAC region, only 25% were included in the top 20 scorecard.

One of the particularly weak areas, according to STL Partners, is green finance, where 51% of all of the assessed companies scored the lowest possible tally: Commitment to biodiversity didn't fare much better.

The assessed companies performed slightly better in enabling customers to reduce their own carbon dioxide emissions. There was no top performer in the metric, but 40% managed to achieve a fair score of 3 (out of 5) which shows “the relative difficulty within this category”, the report's authors noted.

When it comes to transparency, there was only one company which hit top score for publicly reporting its emissions in all three scopes, in addition to associated reduction targets. On the plus side, far more companies (16%) achieved the highest score for structured sustainability reporting, with Telefónica and Proximus leading the way.

But not all sustainability assessments come up with the same results: Cellnex unveiled it was recognised as one of the five “leading global telcos in sustainability” in a report from Sustainalytics, a subsidiary of Morningstar. It measured the company’s exposure to risk in sustainability terms based on ESG (environmental, social and good governance) criteria.

The company’s CEO Tobias Martínez commented that “remaining among the top 5 global telecommunications companies most committed to sustainability shows us that we are on the right track. ESG criteria have become a fundamental pillar of our corporate strategy. We still face great challenges, and we are committed to implementing and improving our practices.”