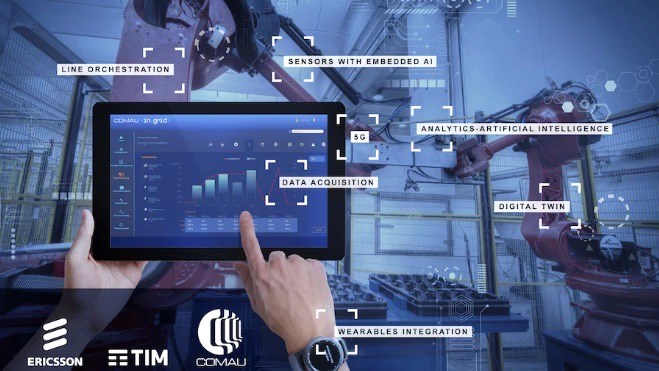 In today’s industry roundup: Turin is shrouded in smart factory applications; Google Cloud teams up with TIM for a new ‘region’; multiple factors lead to a major contraction of Europe’s smartphone market during the first quarter of 2022; plus much more!

Telecom Italia (TIM) has teamed up with Ericsson and advanced industrial automation products and systems specialist ​​Comau to develop smart factory applications using network slicing capabilities enabled by a 5G network set up by the operator and vendor at Comau’s headquarters near Turin. The applications developed so far cover: The real-time tracking of a robot in order to create a digital twin; the real-time monitoring of industrial assets for predictive maintenance purposes; and immersive telepresence to enable remote, off-site support. To find out more, see this TIM announcement.

Still with TIM… The Italian national operator has teamed up with Google Cloud to enable the opening of the hyperscaler’s new datacentre facility ‘region’ (dubbed Europe-west8) in the Milan area. The new deployment, built in collaboration with TIM, is the first of two regions that are opening in Italy, with the second set to launch in the Turin area during the coming months. “We believe the new cloud regions in Milan and Turin will have a positive impact for  years to come,” noted Google Cloud in this announcement. “A recent independent economic impact report made by the University of Turin, highlights that the two regions could potentially generate up to €3.3bn  and support up to 65,000 new jobs in Piedmont and Lombardy by 2025,” it added.

The European smartphone market recorded its lowest first-quarter shipments for nearly a decade, a year-on-year decline of 12% to just 49 million units in the first three months of 2022, according to the latest data by Counterpoint Research. Numerous factors have led to the drop, including the ongoing component shortages, lockdowns in China due to the Covid-19 pandemic, worsening economic landscape and the Russo-Ukrainian War. Increased inflation levels in the region and the decision by Samsung and Apple to halt shipments to Russia have also made some impact, according to the analyst company. In addition, “the impact of the war may develop wider ramifications if it leads to a drop in availability of raw materials, a rise in prices, further inflationary pressure and/or other vendors withdrawing from Russia”, noted Counterpoint Research’s associate director, Jan Stryjak. Looking ahead, the company expects the smartphone shipments market to get worse before it improves and forecasts the annual growth in shipments to continue to decline in the next few quarters. See more.

T-Mobile US has shaken things up again with the announcement of Coverage Beyond, which offers its mobile customers “free high-speed data in 210+ countries and destinations AND free in-flight connectivity and streaming all flight long on the biggest U.S. airlines”. The operator boasts: “Starting June 21, when touching down in a foreign country, T-Mobile customers will get 5GB of free high-speed data each month, up to 5G speeds where available, in 210+ countries and destinations on T-Mobile’s most popular plan, Magenta MAX, and on the Business Unlimited Ultimate plan. No passes to buy. No hoops to jump through. No BS.” Read more.

Apple is the most valuable brand in the world, followed by Google, Amazon, Microsoft and Tencent, according to the latest Kantar Brandz Top 100 Most Valuable Brands report. At number 15, Verizon is the highest-ranked telco, followed by AT&T at 23, Deutsche Telekom/T-Mobile at number 32, and Vodafone at number 65. From the telecom industry vendor community, Nvidia ranked at 11, IBM at 18, Oracle at 22, Qualcomm at 33 and Intel at 34 (plus a number of others further down the ranking). The report is available to download here. Deutsche Telekom also issued an announcement to note how it was the highest-ranked European telco and the second most valuable German brand, behind SAP.

The US Federal Aviation Administration (FAA) has called on major domestic airlines to address risks from a planned 5G signal boost by mobile operators in July, reported Reuters. According to a letter from acting FAA administrator Billy Nolen, AT&T and Verizon intend to boost C-Band 5G services near some airports in the US. Similar concerns relating to interference with technology used by airlines arose earlier this year, causing disruptions and delays to flights.

ICT services giant Atos, an important systems integration partner to many telcos and enterprises, is considering splitting into two separate companies. The Tech Foundations business line, which is focused on designing, building and managing IT and networking systems, would remain as Atos, while the digital services, big data and security units would be spun out as a separate company called Evidian. For further details, see this Atos announcement.

In an effort to ensure Belgian citizens are not left behind as the world becomes more reliant on digital services, some 46 companies and organisations, including national telco Proximus, have signed a Digital Inclusion Charter. By doing so, they have pledged to: Collaborate and identify best practices that improve digital inclusion and share these with other signatories; promote digital inclusion within their organisation and beyond; and support campaigns that make digital inclusion a priority. According to Proximus, the public lacks awareness of the social divisions caused by digital exclusion and the real extent of the problem: “As much as 40 per cent of the Belgian population today risks exclusion from our increasingly digitised society.” Read more.

BT is facing the prospect of a disruptive staff strike if members of the Communication Workers Union (CWU) vote in favour of industrial action over pay. Read more.