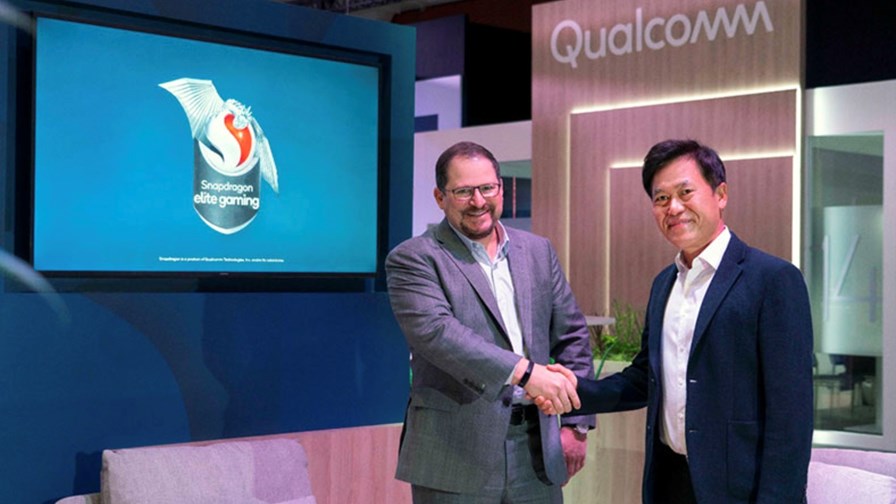 The final news roundup of the week concludes with news of a closer relationship between SK Telecom and Qualcomm, a great end to 2021 by Samsung and early year scuttlebutt around Mobile World Congress’s future.

South Korean operator SK Telecom (SKT) confirmed that executives from the company and its affiliates met with Qualcomm’s President and CEO, Cristiano Amon, at CES 2022 to discuss cooperation in the ICT field, with the topics covered including semiconductors and 5G. Talks were led by Park Jung-ho, Vice Chairman and CEO of SK Square and SK hynix, and were also attended by Ryu Young-sang, CEO of SKT. Development of data centre applications and high-speed memory for PCs, alongside cooperation in areas such as the metaverse and smart factory, were also talking points between the pair. In a company statement announcing the meeting, Jung-ho explained cooperation is “no longer a matter of choice but an absolute necessity” as competition heats up in the ICT market globally. The executive pledged SK’s ICT affiliate companies to “lead innovations by pursuing cooperation that goes beyond all national borders and industries.” Both companies have been particularly interested in the development of a virtual world now known as the metaverse, with SKT recently highlighting it as a potential revenue stream, while Qualcomm started the year with a Microsoft tie-up on accelerating the augmented reality (AR) adoption as the two companies count themselves as “believers in the metaverse”. Find out more here.

The GSMA has reportedly warned its partners that the annual Mobile World Congress (MWC) event might no longer be hosted in Barcelona if this year’s show, which is due to open its doors in eight weeks’ time, doesn’t go ahead as planned, according to Spanish digital news site The Objective. According to the report, the GSMA and major exhibitors are confident the event will take place starting 28 February, but that all options (including postponing until the summer, as happened last year, or cancelling outright) are still on the table. The outcome will be telling, as the GSMA is due to negotiate with the Barcelona city authorities this year about whether to extend MWC’s stay in the Spanish city, notes the report. Many in the industry, not just the GSMA and the city of Barcelona, will be hoping the show goes ahead successfully and that talk of shifting the city location for future MWCs can be set aside.

The US Federal Aviation Administration (FAA) renewed concerns over the impact of 5G deployments on flight operations, adding a page to its website aiming to explain its arguments regarding the next-generation technology and remedies it is seeking to alleviate the risk of disruptions. It highlighted a potential risk on radar altimeters (used to measure the altitude of an aircraft above the ground) which is currently under assessment in collaboration with airlines and manufacturers. Currently, 5G services are planned to launch on 19 January. The move comes just a few days after US operators AT&T and Verizon agreed to further delay the launch of 5G services using C-band spectrum following the FAA’s request. Read more.

After yesterday’s piece on wooden satellites, today we bring you the news that Lockheed Martin, Amazon and Cisco are collaborating to “integrate unique human-machine interface technologies into NASA's Orion spacecraft, providing an opportunity to learn how future astronauts could benefit from far-field voice technology, AI and tablet-based video collaboration.” What that actually means is an “innovative technology demonstration” called “Callisto” (a chaste nymph in ancient Greek mythology, as Boris Johnson would tell you at the drop of a hat) will be onboard Orion for the upcoming, unmanned Artemis I mission to the moon and back planned for early March. The only passengers will be a tailor’s dummy in a natty orange jump-suit strapped into the left-hand seat of the crew capsule. Given that Amazon is one of the more vocal partners in the scheme, it will come as little surprise to learn that Callisto will feature Alexa, Amazon’s virtual assistant technology (“Alexa, play David Bowie”) as well as Cisco’s Webex video-conferencing platform. The intent is to determine “if these tools might benefit future astronauts flying to distant destinations like the Moon and Mars.” According to Lisa Callaghan, VP and GM of Commercial Civil Space at Lockheed Martin, the demo will help determine if it could be used in future manned space missions to enable astronauts to be more self-reliant as they explore deep space. She added, "Callisto is a shining example of how new partnerships with commercial technologies can be flown on Orion to benefit future human deep space missions." The system has been tweaked so that Alexa will work without an Internet connection while Webex will run on a tablet utilising NASA's Deep Space Network. (“Alexa, play Major Tom by Peter Schilling. I’m coming home”).

With a combination of price rises, tax increases and raging inflation hitting them in the pocket, British consumers are beginning to turn ways from streaming services as their prices rise too. According to new research by Accenture, 54 per cent of UK users say their entertainment subscriptions are now too expensive. They go up, usually well beyond the rate of inflation, year-in, year-out, and now 24 per cent of subscribers confirm that they will decrease the amount that spend on streaming media and entertainment over the course of 2022. What’s more, 54 per cent are also “frustrated” by the processes and complexities of navigating different media services and are becoming disenchanted by them and the perceived shortages of new content. Meanwhile, 48 per cent want to be able to port their profiles and preferences from one service to another to allow better personalisation of content. All-in-all it’s potentially bad news for the likes of Amazon Prime, Disney, Netflix, Spotify and their ilk who have enjoyed some fat years, especially over the time of Covid, but may soon find themselves on an enforced diet.

That’s how the cookie crumbles in Germany where new Telecommunications Telemedia Data Protection Act (TTDSG) has been passed tidying-up various anomalies and inconsistencies in the country’s data protection laws. It merges the data protection regulations in telemedia and telecommunications law that were previously distributed across various legislative sectors and provides up-to-date protection of privacy and confidentiality for users of “Internet-ready user’s terminal infrastructure such as websites, messenger services, or smart home devices.” Along with many other nations, German consumers are increasingly concerned about the proliferation and intrusiveness of cookies and Section 25 of the new law requires that an end user’s “valid consent” must be obtained when using cookies and similar tools that are not essential for the operation of the website. What’s more, consent must meet the requirements of Europe’s over-arching GDPR (General Data Protection Regulation), in that it must be freely given, specific, informed, unambiguous, explicit and able to be revoked by a user at any time. No consent is required for technically necessary cookies or those used exclusively for the transmission of messages via a public telecommunications network. The TTDSG also covers the storage of data in terminal infrastructures that connect IoT devices in systems and applications such as smart vehicles and smart homes which, these days, are usually stored in the cloud.

And this is how the cookies are crumbling in France, where the regulator, the Commission Nationale de l'Informatique et des Libertés (CNIL), has just fined Facebook €60 million and Google €150 million for their continuing failure to introduce quick and easy ways for web users to delete trackers. Notes accompanying the fine notice emphasise that the two giant social media sites provide a big, easy-to-see and easy-to-find button for consumers to agree to accept cookies but signally fail to provide anything anywhere near similar to permit them to reject trackers. It notes that the process they do provide to delete unwanted cookies is complex and consists of several, iterative steps whereas accepting them take a single press of a single button. This, the CNIL says, inhibits a users’ freedom of choice and negates their legal right to freedom of consent, which is in breach of Article 82 of France’s Data Protection Act. The regulator has given Facebook and Google three months to update their French-language websites to permit the easier rejection of trackers, or face increased recurring fines of €100,000 a day. The penalties are of course derisory and meaningless given the immense wealth that Facebook and Google have at their disposal. According to their latest published quarterly figures, Facebook made revenues in excess of US$28 billion and Google made over $60 billion. However, antitrust investigations into the two companies continue in France, across the EU and in the UK, and political and regulatory scrutiny in the US and elsewhere is accelerating and deepening. Whilst Facebook, Google et al can shrug-off pinprick fines now it’ll be a different matter when, as seems increasingly likely, severe financial (and other) wounds are inflicted by regulators and law-makers around the globe.

Wireless cellular industry trade association 5G Americas, has appointed T-Mobile’s President of Technology, Neville Ray, as Chairman of its Board of Governors for 2022. Ray has previously served in this role in 2018 and 2019, and now takes over from Igal Elbaz, SVP of Wireless and Access Technology at AT&T, who occupied the post in 2020 and 2021. Commenting on the move, Ray noted 5G Americas “will continue to play a strategic role, addressing key opportunities in technology innovation, spectrum and new use cases for 5G.” The organisation has also re-elected Barbara Baffer, Vice President of Government and Industry Relations at Ericsson, as Treasurer. Alongside the announcement, she emphasised 5G Americas’ commitment towards the progress of mobile communications “for the benefit of people throughout the Americas.”