SKT sees money in the metaverse as it does the splits 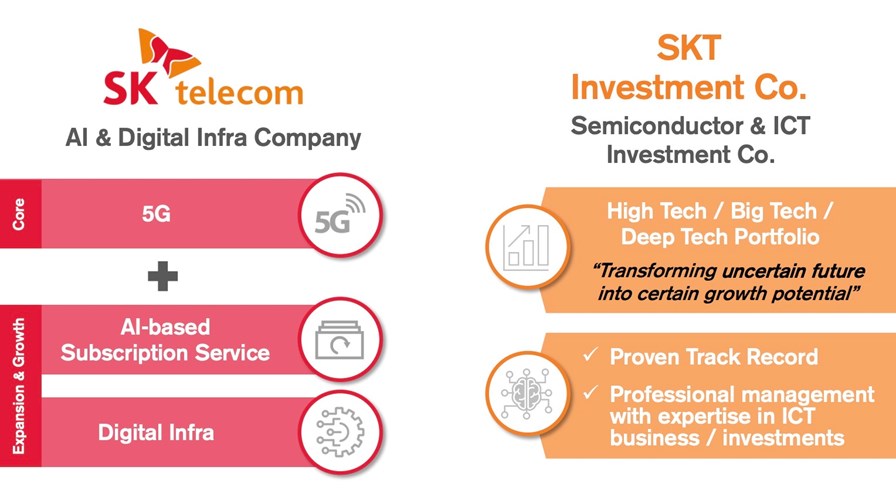 SK Telecom's new CEO has set out a vision for the future in which growth mainly comes from non-traditional telecoms services. Or to put it another way, the South Korean telco will make a solid effort to transform itself into a digital services provider during the next few years, relying on AI and the metaverse, as well as cloud services and data centres, to deliver a sizeable uplift in revenues.

On Monday the firm completed the spin-off of SK Square, the unit it dubbed ‘ICT Investment Company’ when it announced the split back in April. As its former name suggests, the business comprises the 16 or so non-telecom units of SKT, including its stake in chipmaker SK Hynix, and is charged with making aggressive investments in the ICT space, particularly in the increasingly hot semiconductors sector.

Its establishment leaves SK Telecom to focus on its core telecoms business... though much of the “surviving” business will be focused on the development and growth of services that aren’t the domain of traditional, mainstream telcos.

Executing on those plans will be the job of Ryu Young-sang, who has been with SKT for more than 20 years and until Monday served as president of its MNO business. He has now stepped into the CEO seat, his predecessor, Park Jung-ho, having made a move to lead SK Square.

"As we open a new chapter in our corporate history, we will strengthen our market leadership by offering customer-centered technologies and services, and make redoubled efforts to become a socially responsible company admired by customers," proclaimed Ryu Young-sang in a statement announcing his appointment. That doesn't tell us a lot, but SKT's explanation of his role is clearer: "Under the leadership of the new CEO, SKT will evolve into an 'AI & Digital Infrastructure Service Company' that provides greater customer value based on its stable fixed and wireless telecommunication infrastructure coupled with new growth drivers like AI, while contributing to the advancement of the whole society."

Figures provided by the telco earlier this year back up its assertion that it is focusing on AI and digital infrastructure.

SKT has set a 22 trillion won (US$18.7 billion) revenue target for 2025, which represents 47% growth from the KRW15 trillion it booked in 2020. While telecoms represented the lion's share of turnover last year though, a CAGR of just 4% over five years will see it account for 72% of the total in 2025, with all the real growth coming from what SKT terms 'subscription' and 'enterprise' offerings.

The latter is fairly self-explanatory: Enterprise covers SKT's data centre operations, cloud services, and industrial IoT, and is slated to bring in KRW4.5 trillion in 2025, up from KRW1.4 trillion last year. The subscription category includes e-commerce and media and centres around the T Universe suite of services it unveiled this summer.

In Monday's announcement, SKT laid out its endeavours slightly differently – as Fixed & Wireless Telecommunications, AI Service, and Digital Infrastructure Service – but its revenue targets remain. AI Service includes T Universe, and the newly announced AI Agent, "an AI-based service that integrates all products and services of SKT and its ICT affiliates," SKT said. It will set itself apart from its competitors by offering personalised services to customers, it added.

AI Service also includes Ifland, the metaverse platform SKT unveiled in July. Fast-becoming one of the most used, or arguably over-used, terms in telecoms, in no small part thanks to Mr Zuckerberg, metaverse relies heavily on solid, high-speed infrastructure – SKT's first growth pillar – to enable us all to live virtually...to over-simplify a little. Ifland is essentially a business application at present, focusing on online meetings, conferences and so on. However, SKT has now pledged to transform it into an open platform and provide enhanced user experience through partnerships with companies in other industries, including gaming and entertainment.

We have heard a lot from telcos about digital transformation in recent years, but today's announcement suggests SKT is really going for it. Its other two pillars – fixed & wireless and digital infrastructure – are more recognisable telco areas of focus, but digital services pervade them too. While SKT is committing to expanding 5G coverage, it is also talking about creating IPTV synergies with SK Broadband and bringing together OTT and home media services, as well as upping investment in original content creation. The content market may not have been a happy place for telcos elsewhere in the world to date, but South Korea has always been fairly idiosyncratic. On the digital infrastructure side, SKT intends to build more data centres, and push on with 5G edge computing and IoT expansion.

There's a lot going on there, and much of it looks like the blueprint for a new age digital service provider rather than a traditional telco – but then South Korea, along with Japan, the Nordics, Israel and Silicon Valley has always been a few steps ahead of the pack.