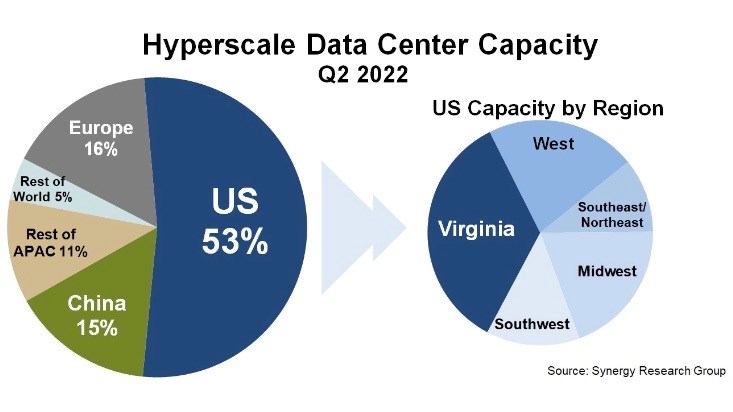 The US is home to more than half of the world’s hyperscale datacentre capacity and with growing numbers of such facilities that dominance is not set to diminish in the coming years, according to new insights published by the Synergy Research Group.

According to the research house, there are now more than 800 large datacentres around the world operated by the hyperscale giants (including Amazon, Google, Microsoft, Facebook, Alibaba and Tencent). Some 53% of the operational datacentre infrastructure is to be found in the US, while Europe is home to 16%, China 15%, and the remaining 16% are located in other parts of the world (see the graphic, above).

“There is a huge concentration of infrastructure around the so-called Data Center Alley, centred around Loudoun, Prince William and Fairfax counties, with datacentres clustered primarily around the towns of Ashburn, Sterling, Manassas and Chantilly,” notes the Synergy Research team. “Amazon, in particular, locates a large amount of its datacentre infrastructure in Northern Virginia, with Microsoft, Facebook, Google, ByteDance and others also having a major presence,” it added.

“Hyperscale operators take a lot of factors into account when deciding where to locate their datacentre infrastructure,” according to John Dinsdale, a chief analyst at Synergy Research Group. “This includes availability of suitable real estate, cost and availability of power supply options, proximity to customers, the risk of natural disasters, local incentives and approvals processes, the ease of doing business and internal business dynamics. This has inevitably led to some hyperscale hot spots. In Europe, the Netherlands and Ireland have always punched far above their weight, beating out countries with larger economies like Germany and the UK. But globally, the standout region is the US state of Virginia. Virginia has far more hyperscale datacentre capacity than either China or the whole continent of Europe,” he added.

Elsewhere in the US, the west coast is another hot spot thanks to facilities in Oregon and California, while the mid-west states of Iowa and Ohio are also popular locations for the large facilities.

China is home to “the great majority of the datacentre infrastructure of Chinese companies like Alibaba, Tencent and Baidu,” adds the Synergy Research team. Elsewhere across the Asia-Pacific region, Japan, Singapore and Australia also have some facilities but the capacity in those countries is far below that of China.

But there are signs that the capacity load will be just a little less concentrated in the future: “Our analysis of the future datacentre pipeline shows that the relative importance of these hot spots will tail off a little over the next five years, as hyperscale infrastructure permeates a broader geographic footprint,” noted Dinsdale.

The research firm also tracks the datacentre facility construction plans of the hyperscaler community and expects that “the relative importance of current hot spots will diminish a little over the next five years”.

The Synergy Research team tracks the datacentre footprints of 19 of the world’s major cloud and internet service firms, including the largest operators in software-as-a-service (SaaS), infrastructure-as-a-service (IaaS), platform-as-a-service (PaaS), search, social networking, e-commerce and gaming. Perhaps not surprisingly, Amazon, Microsoft and Google are the largest, with well over 130 datacentres each and with at least 25 in each of the main regions – North America, APAC and Europe.