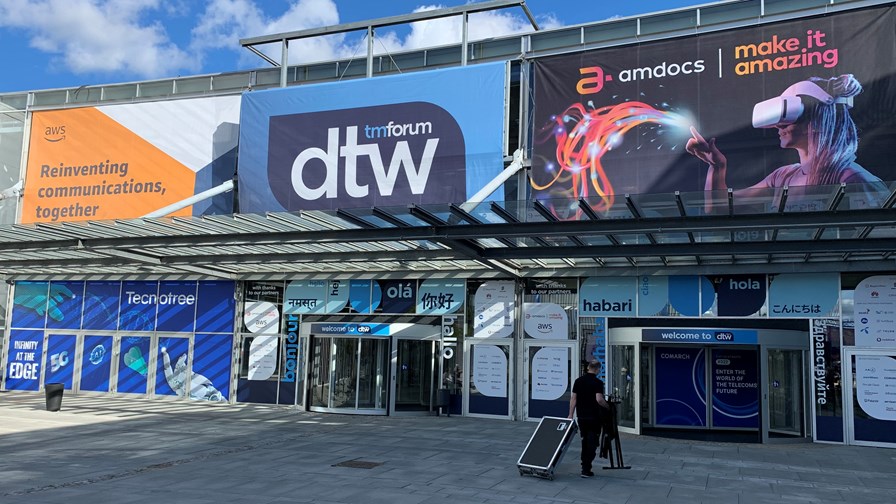 The telecom networking sector looks a lot different to how it did five years ago. While 5G has grabbed a great deal of focus and attention, for me the biggest change has been the increasing importance of hardware-independent software (that is to say, software that is not tied to a particular hardware system), the impact on the industry of the hypercalers and their cloud platforms, and the looming doomsday scenario for traditional service providers and vendors – much of this was in evidence in Copenhagen last week at the Digital Transformation World (DTW) event organised by the TM Forum.

At the heart of the maelstrom is the public cloud. For sure, five years ago there was talk about how the public cloud platforms might be useful for running some operational support system (OSS) and business support system (BSS) tools, but I recall senior telco executives scoffing at the idea that anything as vital as packet core functionality might run on Amazon Web Services (AWS), Microsoft Azure or Google Cloud. How times have changed.

And the cloud giants had identified a real opportunity. The hyperscalers were all building telecom-focused teams and courting the major operators and vendors, but much of this happened behind the scenes, not out in the open.

Fast forward to the Bella Center in Copenhagen, September 2022, where three of the first physical booths on the show floor were for AWS, Microsoft and, the biggest and most lively of the lot (with live music and a very popular cocktail bar and whisky station), Google Cloud, which recently became a TM Forum member. Now these former outliers are part of the industry establishment, with walk-up booths next to those of Amdocs, Netcracker, Oracle, Huawei (yes, still very much in evidence) and the many other telecom software stalwarts. 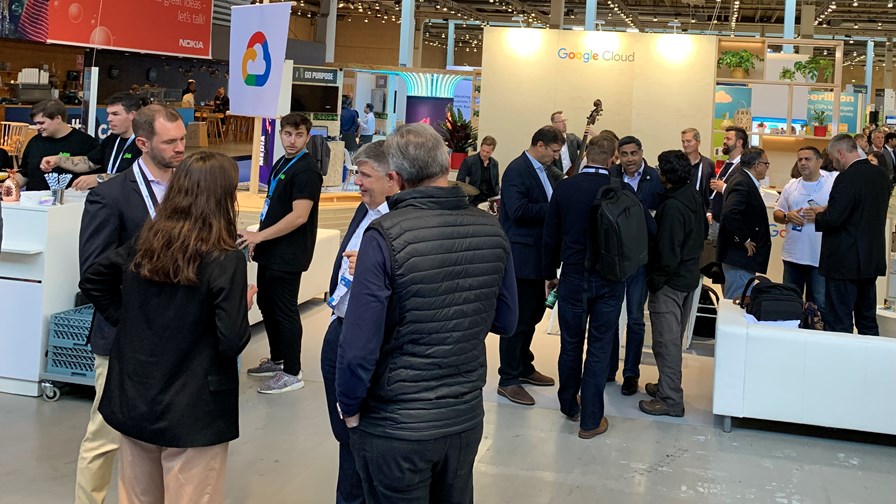 The Google Cloud booth at DTW 2022 complete with love band and cocktail bar (which all booths should have, of course).

The increasing role the hyperscalers are playing was evident, too, in the event’s programming: Adolfo Hernandez, vice president of global telco business at AWS was a keynote speaker on the first day; while Jon James, CEO at Danish national service provider Nuuday, gave a great presentation about how a telco IT migration to a public cloud platform, aided and abetted by Netcracker (and Azure, although he didn’t actually name the hyperscaler), was enabling his company to become a true digital service provider.

The hyperscalers weren’t the only ones on the show floor, signifying a shift in the sector. The trend towards non hardware-specific software and the cloud now also opens the door for other non-traditional companies to play a role in delivering the management, networking and orchestration technology tools that operators of all kinds need. As a result, telcos that are developing their own software and building true networking software product ecosystems (rather than just marketing ecosystems) are now becoming new-age vendors, using cloud platforms to offer up systems integration services and the software building blocks they already use in their own networks (and so are already proven to be ‘telco grade’) to other operators.

Right now there are three main examples of such hybrid telecom players that are technology vendors as well as network operators: Rakuten Symphony, Jio Platforms, the digital business unit of Indian conglomerate Reliance Industries Ltd (RIL) that counts mobile and broadband operator Reliance Jio as part of its portfolio, and NTT Docomo (the latter of which wasn’t in evidence in Copenhagen).

Rakuten Symphony, the cloud-enabled Open RAN technology spin-out from Japanese operator Rakuten Mobile, wasn’t on the show floor, but senior executives were much in evidence, particularly in the VIP area that Symphony sponsored. Tareq Amin, who is CEO of Symphony as well as Rakuten Mobile, was practically speed dating with partners, peers, analysts and media, as well as participating in the event’s programming in the form of a keynote interview. (Does this guy ever sleep?) You can read about what he had to say on a couple of topics in the following articles:

And since the DTW event, Symphony has been churning out press releases about its latest developments, including the imminent availability of its Symworld suite of functions and operations blueprints on AWS and the launch of its Symops service assurance suite, which is in effect a new-age collection of cloud-native OSS tools. This will be very disruptive if Symphony can tempt network operators to give it a whirl (they might take some persuading).

It’s interesting to note that before Tareq Amin joined Rakuten, he was at India’s leading mobile operator Reliance Jio, helping to build a greenfield 4G network as senior VP of technology development and automation. Amin likes to chat with the Jio team to swap views of the market, as both companies are doing a lot of the same things and thus meeting the same challenges and addressing some of the same opportunities.

They also both had a high profile at the DTW event and both make it clear they use TM Forum specifications as part of their software development processes. Rakuten Symphony describes its Symworld suite of telecom tools and blueprints as “TM Forum compliant”, while Jio Platforms is a significant user of TM Forum APIs.

Like the hyperscalers, Jio Platforms had a booth on the show floor in Copenhagen where it was exhibiting the many software functions it has  developed – which are available for other operators to use. That particular topic was front and centre of the keynote speech given by Kiran Thomas, president and CEO, and Anish Shah, president and chief operating officer of Jio Platforms, who talked through Jio’s developments and its “platforms as products” (PaPs) strategy that will see the company take what has been rolled out at scale and proven in the Indian market (at Reliance Jio) to the global market and sold to other network operators – see Watch out, vendors! Here comes Jio’s PaPs.

On its booth, Jio Platforms boasted that it “leads the industry on open API conformance with 52 Open API certifications”, which is important for its own customers in India but also for any other operator that might use the Jio Platforms software, because they will know it conforms to TM Forum open API specifications that makes interoperability with other similarly open functions and applications easier.

Indeed, it seems Jio Platforms has achieved the most certifications, followed by cloud-based BSS newcomer Totogi (with 44), Whale Cloud (35) and Tecnotree (34), according to the latest stats from the TM Forum. The major traditional OSS/BSS players are a long way behind, even though the big network operators are calling for their suppliers and technology partners to gain open API compliance. And at this point, it’s only fair to call out the progress made by the TM Forum in delivering practical programmes and initiatives for the industry, and not just being a talking shop – it’s delivering useful outcomes for its operator (and vendor) members.

So, the way telcos and large enterprises construct and run their networks is definitely changing, and the potential for disruptive innovation by developers of cloud-native, hardware-independent software is apparent. But why would operators take a leap of faith in the likes of Rakuten Symphony or Jio Platforms or vendor newcomers such as Totogi? The current networks and their supporting systems are, for the most part, doing well enough and the operators know how those work – cloud-native processes and public cloud-enabled software functionality is a very different jar of pickled fish (as one might say in Denmark).

This is where the existential crisis comes into play. Some operators have seen the light at the end of the telecom tunnel and taken it as a warning that if they don’t change the way they operate, become more agile, become more cloud-oriented, open up their service platforms to third-party applications and give more options to their customers for self-service and tailored choices, they’ll be toast.

One industry commentator described the situation as a “near-death” moment for traditional communications service providers: embrace the new or slowly become a connectivity utility (at best). Those making clear and sometimes bold strategic moves to explore new technologies, platforms, services and sectors are the ones that have experienced their own wake-up call. That might seem like a rather dramatic viewpoint but it’s hard to argue against.

And that’s not the only drama. The telecom industry also faces a skills and diversity crisis –  that much was explained by Colt CEO Keri Gilder during another keynote address in Copenhagen – see Telecom has a “talent problem”, warns Colt CEO Keri Gilder.

Can anything be done about it? Gilder thinks so and so does the TM Forum which, via its Inclusion and Diversity Council (of which Gilder is the chair), has developed the Inclusion and Diversity Score (IDS), a “multi-dimensional benchmarking tool co-created by TM Forum members to help digital service businesses win the war on talent by retaining, nurturing and improving both talent and culture through greater diversity and inclusion”.

Will it have an impact? Will it make a difference? We don’t know yet, but the TM Forum is trying at least to do something about it, and for that it should be given credit. Let’s hope it results in some positive change and that, at DTW events in the future, the meeting rooms and halls will be a little less male, white and middle-aged dominated.

In the meantime, the TM Forum can be happy with its first Copenhagen event – people seemed pleased to be there and were engaged. And, of course, there were some official show awards to be handed out but, as ever, there’s only one accolade that really counts at such industry gatherings, and that’s the TelecomTV gold medal (virtual) for ‘Best Coffee on the Show Floor’.

There was a clear winner in Copenhagen, so congratulations to Netcracker, which made a very wise marketing investment in a barista, a move that paid off handsomely. I hope to see some serious competition next year, because there wasn’t anything even remotely worthy of a silver medal. 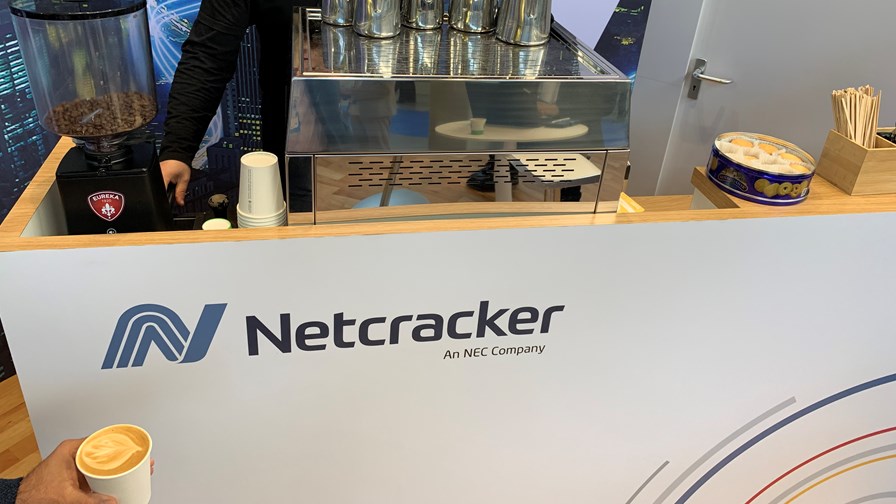 An example of the award-winning coffee and the enabling hardware on the Netcracker booth at DTW 2022.