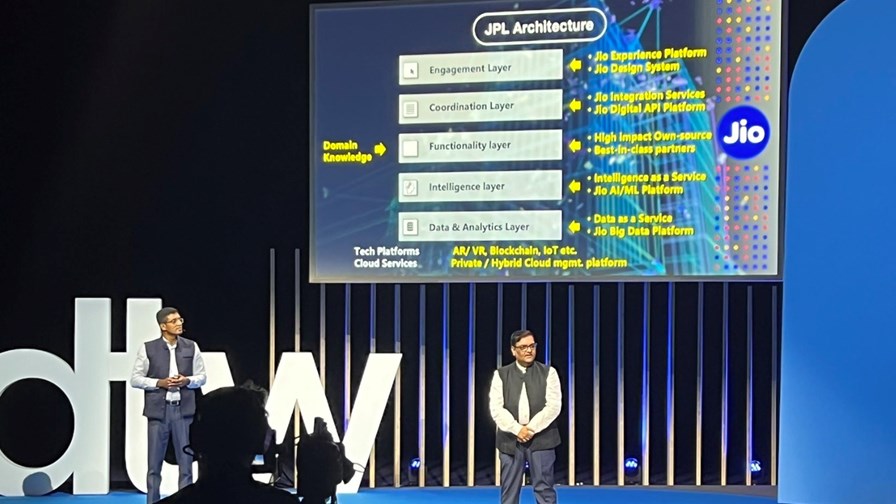 Copenhagen – Digital Transformation World 2022 – When Elisabetta Romano, CEO at Telecom Italia’s international Sparkle division, took to the stage for her keynote presentation here in Copenhagen, in just a few words she highlighted one of the biggest shifts in the telecom industry right now: “Watch out vendors!” she cried, referring to the  global expansion plans of Jio Platforms, the digital business unit of Indian conglomerate Reliance Industries Ltd (RIL) that counts mobile and broadband operator Reliance Jio as part of its portfolio.

The shift in question is the encroachment into vendor territory by major service providers, an encroachment made possible by the evolution of enabling technologies away from proprietary hardware-based platforms towards software functionality and cloud-native processes. This hasn’t completely democratised the sector, but for those companies with the scale, the software engineers, the vision and the determination to build a new revenue stream, it’s certainly possible.

So when RIL decided to shake up the Indian telecoms sector, which it has done in just six short years with Reliance Jio (going from zero customers to market leader with more than 410 million mobile connections), it decided to do so by developing many of the key enabling technology platforms itself – a task accelerated by the acquisition of telecom software stack vendor Radisys in 2018.

And it always had in mind that it wouldn’t be developing platforms, cloud-native functions and applications just for itself – it always had the broader market within India, and beyond, in mind.

This was the message shared on stage here by the double act of Kiran Thomas, president and CEO, and Anish Shah, president and chief operating officer (COO) at Jio Platforms. They outlined how the Jio Platforms architecture has been built on a set of platforms, including a big data platform, an intelligence layer artificial intelligence/machine learning (AI/ML) platform, a digital API platform and so on – see image, above.

And these platforms have been developed to the Jio Playbook, which essentially means they were developed to provide the digital enablement capabilities for enterprise users in multiple verticals, and not just be used by Jio itself. That research and development (R&D) work was helped as well by the broad scope of RIL and its domain expertise and knowledge across multiple industries, such as retail, manufacturing and petrochemicals. And the platforms have been designed to enable others to develop their own applications that will run on them too.

This approach, the Jio team believes, will help the company be as successful in the enterprise sector as it has been in the consumer services sector. “There are so many different verticals and industries that can be addressed”, particularly as 5G is rolled out across India and enterprise users can start to make the most of Industry 4.0 applications. And with Jio’s 5G plans already outlined and investments earmarked, those services will be rolled out extensively and quickly over the next 15 months – see India’s Jio to splash $25bn on achieving nationwide 5G coverage by end of 2023.

Now comes the global effort, and hence the Jio’s team reference to its R&D efforts as “platforms as products”, with the aim of taking what has been rolled out at scale and proven in the Indian market to the global market and sold to other network operators. That’s why Romano put out the warning to the vendor community, because none of them have the same story and the same experience (provided the Jio networks and services don’t fall over and fail, of course).

But Jio isn’t on its own in this endeavour and ambition because once it starts marketing its platforms to other operators, it will be doing so in the wake of Rakuten Symphony, the Open RAN-focused vendor spinout from Japanese mobile operator Rakuten Mobile, which has already had some commercial success selling the systems put to work in Japan, most notably in Germany with 1&1 (it’s one major, multibillion-dollar contract to date).

And then there’s NTT Docomo, which also wants to develop new revenue streams by selling the software-based systems it relies on for its 5G architecture.

Will those three be the only ones? Unlikely. Will they be a success and cause a dent in vendor sales? That remains to be seen – if the 1&1 network in Germany is successfully deployed and run, and creates a viable 5G alternative in the largest single market in Europe, it will become more likely. But that outcome won’t be known for a few years yet.

But the potential is there and vendors need to look at how they develop and sell their products sooner rather than later, instead of waiting to see if the rug gets pulled from under them, because the telecom sector is shifting towards cloud-enabled software platforms with or without the global aspirations of Jio, Rakuten and others.