BOSTON--(BUSINESS WIRE)-- According to the latest research from Strategy Analytics, global smartphone shipments fell 8 percent annually to reach 360 million units in Q3 2018. Samsung maintained first position with 20 percent global smartphone marketshare, ahead of Huawei in second, while Xiaomi and OPPO rose to record highs in fourth and fifth places.

Linda Sui, Director at Strategy Analytics, said, “Global smartphone shipments tumbled 8 percent annually from 393.1 million units in Q3 2017 to 360.0 million in Q3 2018. The global smartphone market has now declined for four consecutive quarters and is effectively in a recession. The smartphone industry is struggling to come to terms with heavily diminished carrier subsidies, longer replacement rates, inventory buildup in several regions, and a lack of exciting hardware design innovation.”

Neil Mawston, Executive Director at Strategy Analytics, added, “Samsung shipped 72.3 million smartphones worldwide in Q3 2018, dipping 13 percent annually from 83.4 million units in Q3 2017. Samsung is losing ground to Huawei, Xiaomi and other Chinese rivals in the huge China and India markets. Samsung must solve its China and India problems before it is too late. Huawei soared 32 percent annually from 39.1 million smartphones shipped worldwide during Q3 2017 to a healthy 51.8 million units in Q3 2018. Huawei remains the world’s second largest smartphone vendor with 14 percent share. Huawei has little presence in the valuable North America market, but its Android models are wildly popular in most of the rest of the world, particularly Asia and Europe.”

Linda Sui, Director at Strategy Analytics, added, “Xiaomi shipped an impressive 33.0 million smartphones and held fourth position with a record 9 percent global marketshare in Q3 2018, lifting from 7 percent share a year ago. Xiaomi’s growth increased 19 percent annually in the quarter, but this was down from the 91 percent rate it hit a year ago. Xiaomi continues to slow, due to intensified competition from Huawei in its key markets of India and China. OPPO held fifth place, capturing 9 percent global smartphone marketshare in Q3 2018, up slightly from 8 percent a year ago. OPPO has had a tough year, but it is finally stabilizing and fighting back with keener pricing and innovative big-screen models such as the Find X with a pop-up selfie camera.” 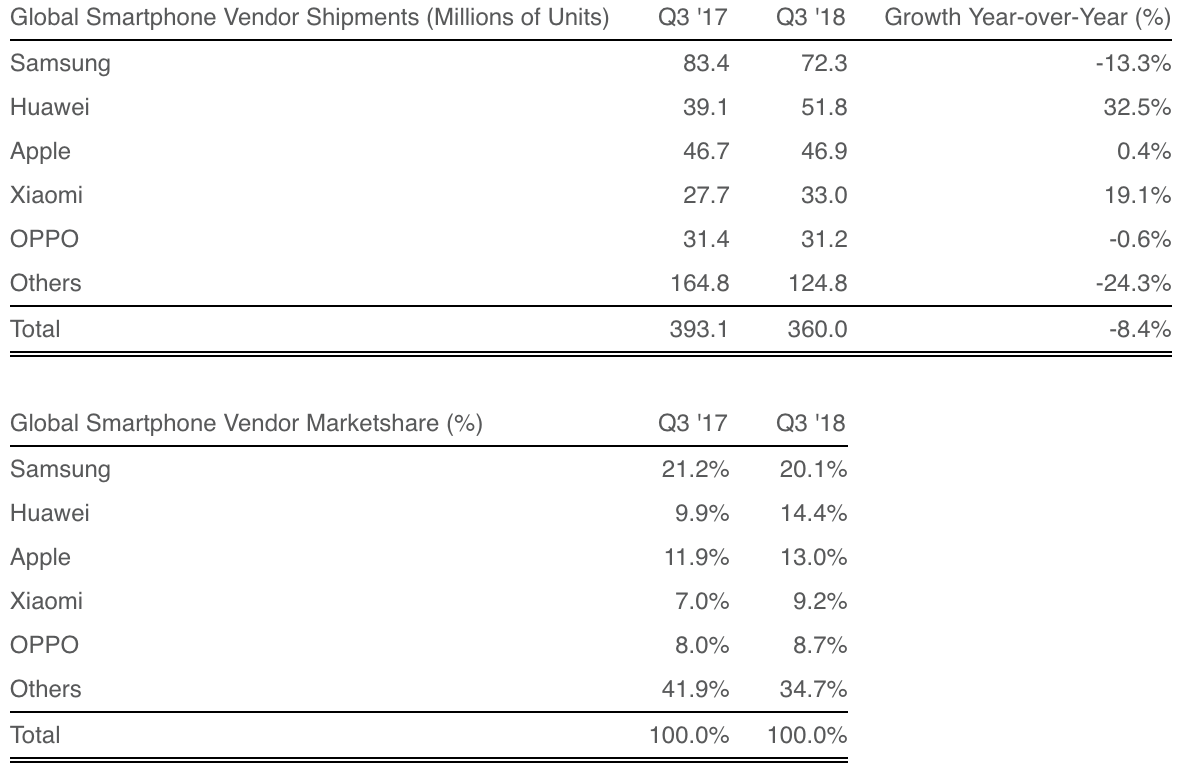 The full report, Global Smartphone Shipments Tumble 8 Percent in Q3 2018 , is published by the Strategy Analytics Wireless Smartphone Strategies (WSS) service, details of which can be found here: https://tinyurl.com/y75uhw62 .