Horseless carriage? You’ll never get me in one of those (haven’t we been here before?) 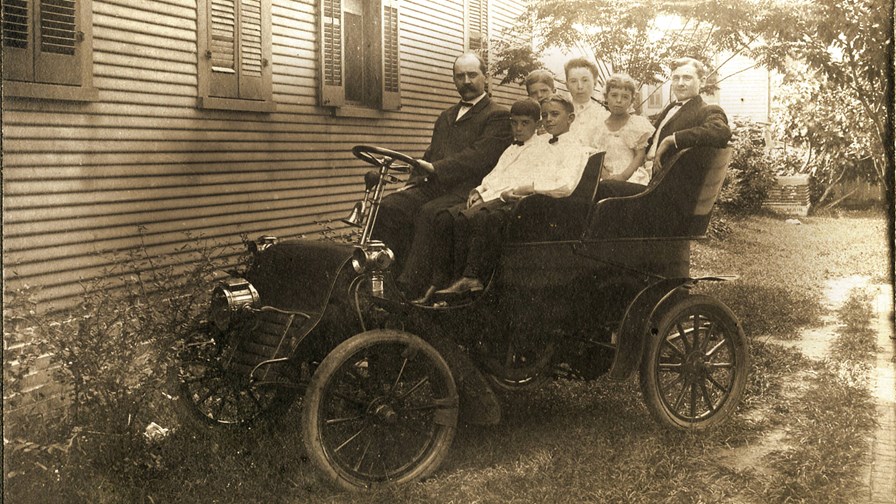 What is it with change? You know there’s no going back and that you’ll love it eventually, but the often the very idea of it is too much to handle. Case in point; the car. Back in 1803, the great engineer Richard Trevithick demonstrated what is thought to have been the first horseless carriage in London. The steam-powered converted passenger carriage lasted the best part of a century, with the first US version appearing in around 1863. However, it was doomed to fail and be supplanted by vehicles powered by the internal combustion engine (although what really spelled the end for the steam carriage was the rise of the railways, which were much more suited to regulated steam power than roads).

In fact, work on petrol-driven vehicles was underway throughout the nineteenth century. By 1885, Karl Benz (later to partner with Daimler and his company’s Mercedes brand) started a rudimentary production line for his petrol-powered car, although it was the Model T from Ford in 1908 that turned the car into a mass market product.

In those early days of the industry, the “car” was seen as a menace and a mechanical monster by large sections of the population. Luckily private investment managed to drive through (bad pun intended) the development of the car, as wealthy individuals attracted by the prestige, the speed and no doubt the danger, provided the financial backing. The fear of many people about trusting their lives to a carriage that had no horses was understandable. Remember that streets and towns were never designed for vehicles, adding to the peril.

But the car was here to stay. The influential wealthy elites (especially in France, which after all gave us the name “automobile”) ensured their success. But what is often overlooked is that most of these early car owners didn’t drive themselves – they employed (another adopted French word) chauffeurs.

Fast forward to today. The prospect of autonomous vehicles – and silent electric ones at that – is proving equally terrifying to many people. They will soon be faced with vehicles that look different to the cars of today (whose design is constrained by chassis and combustion engine space requirements), are powered by a different energy source, and require a different type of driver. Is a computer algorithm and real-time sensor/actuator system any different from employing a liveried chauffeur to perform the mysterious act of “driving” and controlling the car? Not really. And are our towns and cities suited to these new vehicles? No they are not, and they will need to be rebuilt.

The combustion-engine car lasted a few decades longer than the steam powered horse carriages (and proved far more successful), but now it’s time for another change. It will happen, and people will accept that change, but there will be difficulties along the way.

All of which leads us to three separate news stories that have emerged in the past 24 hours, all relating to the human acceptance (or otherwise) of the autonomous vehicle.

Trust me, I’m an autonomous vehicle

Intel has been pushing its work on autonomous vehicles recently, with numerous media updates. It says that passenger trust is the key to our autonomous future, even with perfect self-driving. It quotes a 2016 AAA study that found that 75 per cent of Americans are afraid to ride in self-driving cars.

“We are really close to perfecting the technology for self-driving cars,” said Jack Weast, senior principal engineer and the chief systems architect of Intel’s Autonomous Driving Group, “but our driverless future won’t go anywhere if people don’t trust it. The difference between theory and practice comes down to this: People are downright scared of robot cars.”

Intel recently conducted a ‘trust interaction’ qualitative study with autonomous car passengers who had no previous exposure to driverless cars. Apparently, every single participant experienced a huge leap in their confidence level after their journey.

The research identified seven areas of tension that warrant further exploration and Intel plans to continue user experience research in these areas to help the industry deliver a trustworthy driverless car experience. The human machine interface (HMI) tension points were identified as follows:

If 75 per cent of Americans said last year that they were afraid to ride in self-driving cars, what has happened twelve months on? Not very much, according to a new Gartner survey. This survey polled around 1,500 people in the US and Germany and found that 55 per cent will not ride in a fully autonomous vehicle. Like Intel, Gartner cautions that consumer and social acceptance is a key driver in autonomous vehicle adoption.

Survey respondents agreed that fully autonomous vehicles do offer many advantages, including improved fuel economy and a reduced number and severity of crashes. Additional benefits they identified include having a safe transportation option when drivers are tired and using travel time for entertainment and work. The survey found that consumers who currently embrace on-demand car services are more likely to ride in and purchase partially and fully autonomous vehicles, signifying that these more evolved users of transportation methods are more open toward the concept of autonomous cars.

"Autonomous driving technology will fundamentally transform the automotive industry, changing the way vehicles are built, operated, sold, used and serviced," added Ramsey. “The industry is investing in new safety and convenience technology at a rate not seen since the dawn of the automobile. The experience of owning and operating a car will be dramatically different in ten years.”

Gartner believes that as of mid-2017, more than 46 companies are building artificial intelligence-based software to control autonomous vehicles. In a glimmer of good news, it adds that 71 per cent of its survey respondents said they may consider riding in a partially autonomous vehicle. Hey, it’s a start!

Whilst not specifically focused on autonomous vehicles, a new initiative in Japan will undoubtedly feed into the autonomous driving development work. Accenture has announced that it is collaborating with Sompo Japan Nipponkoa Insurance and Daiichi Kotsu Sangyo in Japan to build a deep learning algorithm using the Intel IoT Platform Reference Architecture to better understand individual driving habits and identify new ways to transform driver safety.

Accenture will use the input to develop an algorithm that will automatically assess the accident risk for each driver by collating and analysing images, biometrics, and vehicle data indicating speed and driving behaviour. Deep learning will be integral to the data platform and could enable transportation companies to provide personalized safety instructions for drivers, helping reduce the number of accidents.

“Rapid advances in IoT and autonomous driving technologies are bringing new challenges that can only be addressed by using new technologies such as this deep learning algorithm,” said Takuya Kudo, Data Science Center of Excellence global lead and Japan lead for Accenture Analytics.

In an initial Proof of Concept experiment conducted in March 2017 that used data collected from 100 taxis and 100 drivers, the deep-learning algorithm created intelligence that identified signs of drivers’ drowsiness and near-miss accidents from their heart-rate changes and driving behaviour.

Vehicles from horse-drawn carriages to the latest Tesla model have always presented dangers, with many of these been down to human errors and fallibilities. Will AI-based autonomous fare any different, or will we be faced with all too predictable headlines about the Rise of the Killer Robot Cars?

And on that note, we’ll leave you with our suggested Friday essential music track, which just about sums up the current problem: Propellerheads featuring Miss Shirley Bassey, History Repeating – Spotify or Apple Music. We're off to enjoy a long holiday weekend, driving ourselves through the countryside while we still can... TelecomTV will return on Tuesday.