Fancy a drive in your very own Intel-inside Batmobile? 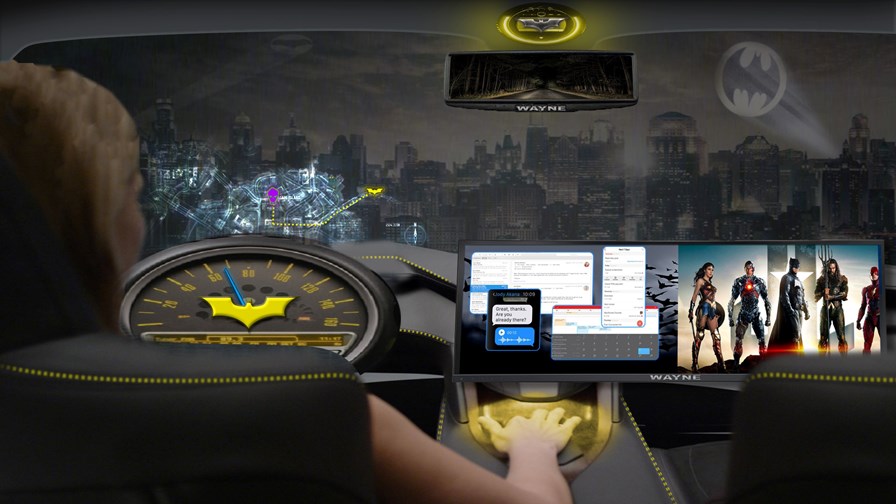 According to Intel CEO Brian Krzanich, “autonomous driving is today’s biggest game changer.” He adds that we rather than focusing on the car as a mode of transportation, we must now start thinking of it as a new type of consumer space, thanks to the advent of autonomous driving. As we ponder on how passengers will spend time while they are riding (as opposed to driving), there is plenty of scope for innovation from in-cabin design and entertainment to in-vehicle safety systems.

At the Los Angeles Auto Show this week, Intel announced a collaboration with entertainment company Warner Bros. to develop in-cabin, immersive experiences in autonomous vehicle settings. Their “AV Entertainment Experience” is described as a first-of-its-kind proof of concept car to demonstrate what entertainment in the vehicle could look like in the future. Yes, it’s just the one vehicle, and will form part of Intel’s fleet of 100 test vehicles.

“The rise of the AV industry will create one of the greatest expansions of consumer time available for entertainment we’ve seen in a long time,” said Krzanich, adding that as passengers shift from being drivers to riders, their connected-device time, including video-viewing time, will increase. Writing on his company blog, he cites recent transportation surveys that indicate the average American spends more than 300 hours per year behind the wheel (which would enable them to complete a monster binge viewing of every episode of Dallas or Yorkshire’s very-own Heartbeat… )

Of course, this isn’t the 1980s or 1990s, so the two companies imagine riders enjoying immersive experiences courtesy of in-cabin virtual reality and augmented reality innovations. “For example, a fan of the superhero Batman could enjoy riding in the Batmobile through the streets of Gotham City,” explained Krzanich, “while AR capabilities render the car a literal lens to the outside world, enabling passengers to view advertising and other discovery experiences.” Oh joy.

Based on WB’s current track record with superhero movies, they are going to need all the marketing help they can get. Yet as Krzanich rightly says, all of this technology will not matter if there are no riders who trust and feel comfortable using it. He says that the technology is not simply about enjoying the ride – it is about saving lives. “In fact, autonomous systems are the logical extension of seat belts, air bags and anti-lock braking systems,” said Krzanich. He reports that Intel’s Mobileye ADAS (advanced driver assistance system) technology on the road today have proven to reduce accidents by 30 per cent, saved 1,400 lives, prevented 450,000 crashes and saved $10 billion in economic losses. “Our long-term goal has to be zero driving-related fatalities.”

Intel is collaborating with the industry and policymakers on how safety performance is measured and interpreted for autonomous cars. Setting clear rules for fault in advance should bolster public confidence and clarify liability risks. Intel and Mobileye have already proposed a formal mathematical model called Responsibility-Sensitive Safety (RSS) to ensure, from a planning and decision-making perspective, the autonomous vehicle system will not issue a command leading to an accident.

Krzanich is bullish about Intel’s leadership in this sector and his company’s ability to handle the enormous amount of data processing required for autonomous vehicle AI systems. He says with the combination of Mobileye’s sensors and Intel’s microprocessors they can deliver more than twice the deep learning performance efficiency than the competition (i.e. Nvidia): “We view the autonomous vehicle as one the most exciting platforms today and just the beginning of a renaissance for the automotive industry.

A few months ago we woke up to the fact that “autopilots” are nothing new, and have been used in commercial airlines for decades, with a pretty impressive safety record. A spate of articles and political debate looked at what lessons could be learned from aviation. Here’s the big one: there is no comparison between professional, trained airline pilots and car commuters.

Should we expect “riders” of autonomous vehicles to undergo regular training and medicals? No, of course not, yet pilots do. This is because airliners have the equivalent of Level 3 autonomy – an improvement on today’s Level 2 of Tesla, but not the full autonomy promised by Level 5.

“Level 3, especially, is a terrible idea – and carmakers should eliminate it,” said Dr Michael Clamann, Senior Research Scientist at Duke University, speaking to Continental’s 2025D blog. Allowing the driver to chill out, relax and watch a movie is a dangerous concept. “Unfortunately, that’s the scenario we’re looking at with semi-automation.”

Clamann cites the catastrophic failure of Air France 447 over the Atlantic as a tragic example of flawed human-machine interaction (HMI), with ill-defined responsibilities between drivers and AI systems resulting in things going very wrong – a situation known as “mode confusion”.

“Doing something actively is not the same as passively watching it being done by automation,” warned Clamann, adding that we are very likely to see skill decay in automated driving, especially in Level 4, where vehicles will be mostly autonomous but still with some minimum human input at key moments.

Sitting back and pretending to be Batman sounds fun, but only if we have full autonomy and safety systems are water-tight. Until then, we have several years of potentially dangerous semi-autonomous driving – and we need to do all we can to ensure that people are still “drivers” and lulled into being hands-off passengers or “riders”.

Vehicle Connectivity is Surging, but Consumer Paid Subscription Share is in Sharp Decline