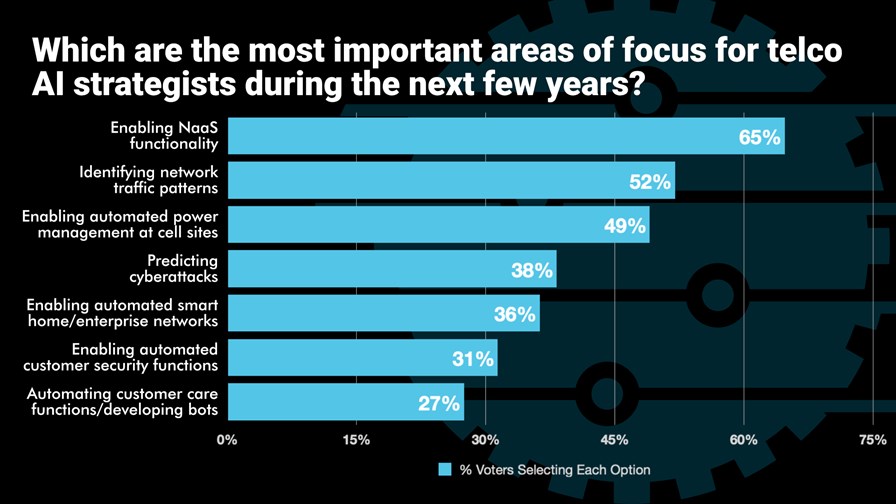 We asked those who attended the online summit to vote in our poll: Which are the most important areas of focus for telco AI strategists during the next few years? We offered up seven options, and respondents could vote for as many as they thought were relevant.

The option ‘Enabling NaaS functionality’ attracted the most votes, selected by 65% of the 100-plus respondents. That result reflected what we heard from our guest speakers during the second day of the summit, when orchestration evolution and NaaS were the focus of the live roundtable and audience Q&A session. In particular, Johanne Mayer, founder and director of consultancy NaaS Compass, who is also leading the NaaS specifications development work at the TM Forum, noted that the exposure of network and application capabilities to enable NaaS offerings was on the roadmap for many operators, but that it’s still early days for commercial availability and that there is more work to do on the processes enabling NaaS.

Also regarded as an area of great importance, by 52% of respondents, is ‘Identifying network traffic patterns’, a vital task if telcos are to introduce automated network resource management.

And with energy efficiency so high on everyone’s agendas these days, and energy bills rising quickly and putting pressure on operating costs, the only surprise about the ‘Enabling automated power management of cell sites’ option is that it wasn’t selected by more than 49% of respondents.

You can see the other results in the graphic, above, but it’s perhaps worth noting that the option ‘Automating customer care functions/developing bots’ probably received support from only 27% of respondents because much of the development work there has already been started and is quite mature so, perhaps, is not regarded as an area that needs to be as much of a strategic focus in the next few years, especially compared with the other options.

To catch up with all the sessions from the Network Automation Summit, including interviews with executives from Google Cloud and Telefónica, click on this link.