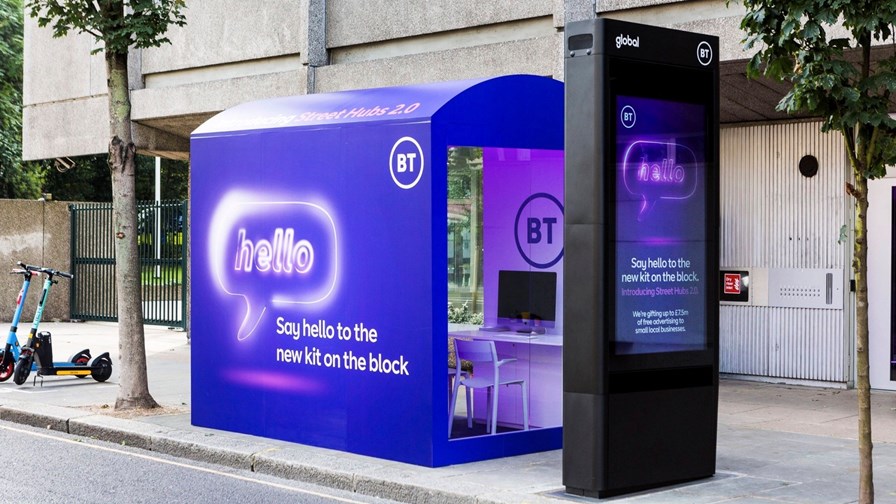 An array of developments at BT, including the launch of a new community hub and the prospect of job creation outside London, plus some 6G thoughts from Huawei’s founder top today’s news bill.

BT has unveiled its first Street Hub 2.0 (pictured above) in the London Borough of Kensington and Chelsea (with further locations to follow), providing free ultra-fast Wi-Fi, phone calls, rapid charging, and further benefits for local communities, including free advertising space to local businesses via digital screens. In addition, five percent of total screen time is dedicated to local councils to promote services, while the hubs can also house air quality and CO2 sensors to enable local authorities to make informed decisions. During the next year 300 more units are to be rolled out to UK locations including Glasgow, Cardiff, Nottingham, Birmingham, Solihull, and Southampton (subject to local planning). Read more.

Still with BT: The UK operator says it will create around 1,000 new jobs “over the coming months and years” at its new offices in Birmingham. Read more.

And yet more BT... Streaming sports broadcaster DAZN has once again been linked to a potential bid for part or all of BT Sport, for which the UK operator is seeking a financial partner (or buyer).

Ren Zhengfi, the publicly elusive and reticent founder and CEO of Huawei, has told his top management to recruit scientists and technologists from all over the world to work (and live) in a new Shanghai campus that he described as “beautiful and suitable for foreigners”. These foreigners, hundreds of them if it all goes to plan, will work on 6G and file endless streams of 6G patents. Late last month Ren told an audience at the Huawei Central Research Institute, “We must not wait until 6G is really useful, as we are then constrained by a lack of patents”. He said this even though Huawei claims already to own more 6G patents than any other company on earth. The new “facility” will be in Qingpu, the most westerly part of the sprawling Shanghai Municipality. Qingpu itself has well over 1 million inhabitants while Shanghai has 29 million and counting. The area is famous for the Lake Dianshan tourist area and the ancient and picturesque town of Zhujiajiao. The CEO said Huawei is “in a critical period of strategic survival and development and must have talent to compete” and went on to wax lyrical about the new campus which, he claims will feature “very beautiful cafes on the roadside of the lake, suitable for modern youth and attracting all talents [so that] if there are 700 or 800 foreign scientists working there, they will not feel that they are in a foreign country.” Wanna bet? Before taking the plunge, prospective employees might want to watch an episode of the famous 1960’s British TV series “The Prisoner”, where an un-named man finds himself living in comparative luxury in a beautiful, mysterious seaside village that he cannot leave, whilst his captors repeatedly tell him, “We want information”

Intense competition and tough trading conditions have been identified by Vodafone Spain as the reasons for its plan to cut 515 jobs, equal to 12% of its headcount, reports Reuters.

The UK government has a new minister with responsibility for the communications and media sectors: In a cabinet reshuffle, prime Minister Boris Johnson has appointed Nadine Dorries as the new Secretary of State for Digital, Culture, Media and Sport (DCMS). It’s impossible to know what this might mean for the broadband sector, but her track record suggests that the institution with most to fear is the BBC, which has been the focus of negative comments from Dorries in the past. She takes over from Oliver Dowden, who was unusual in that he seemed to understand the implications of government policies and decisions on the communications sector.

The Ethiopian government has announced that the national operator Ethio Telecom, headquartered in Addis Ababa, is to be part-privatised. “Interested parties” able to “add value to the company by bringing in best practices in terms of operations, infrastructure management and next generation technological capabilities” are invited to submit an RFP (requests for proposal) to be up to 40 per cent partners in the partial privatisation process. The government hopes services under the new model will begin in January 2022. Ethiopia has a population of 120 million, making it the second most populous country in Africa and the part-privatisation initiative is a central part of the government’s “Indigenous Economic Reform Program”, the aim of which is to increase the involvement of the private sector in the national economy, make big state enterprises more competitive, improve the quality and availability of services and, last but by no means least, to gain access to much needed capital. Ethio Telecom has 45 million subscribers, 311,000 employees and, unsurprisingly given its de facto monopoly status, is already one of the most profitable organisations in the country. Ethiopia is one of the last places on the planet to decide to privatise its telecoms sector and, via various initiatives has been trying to offload telecoms shares since 2018 but success has been limited. However, one licence, which sold for US$850 million has been issued to a consortium led by Kenya's Safaricom. It will be interesting, and probably instructive, to learn which other companies are prepared to put their heads above the parapet and make a bid.

Microsoft says all its users (including those on Windows) can now dump their account passwords and go from login all the way through to accessing online services via an “authenticator app” instead. Basically, this means fingerprint access or “another solution”. If users go down that route, which they are being urged to, logging in to a Microsoft account will be done by dabbing a digit onto the screen of a mobile handset. Redmond HQ enthuses that “nearly 100 per cent of our employees are using the new, more secure system for their corporate accounts”. The announcement is reminiscent of the famous April Fool’s day joke perpetrated by UK newspaper The Guardian when it published a supplement on the little-known island nation of San Serife, complete with pictures of idyllic beaches from where “terrorist attacks have been almost completely eradicated.” Microsoft adds, "Only you can provide fingerprint authentication or provide the right response on your mobile at the right time”. If a handset is lost or stolen alternative access methods are available, including facial recognition. Of course, faceprints are nearly as 100 per cent secure as fingerprints. The new non-password login process (which has been available to corporate accounts since Spring this year) tells users, “You have increased the security of your account and improved your sign-in experience by removing your password". At this juncture it is worth pointing out that there are no agreed standards for the replacement of passwords by other account access methods and there won’t be anytime soon.