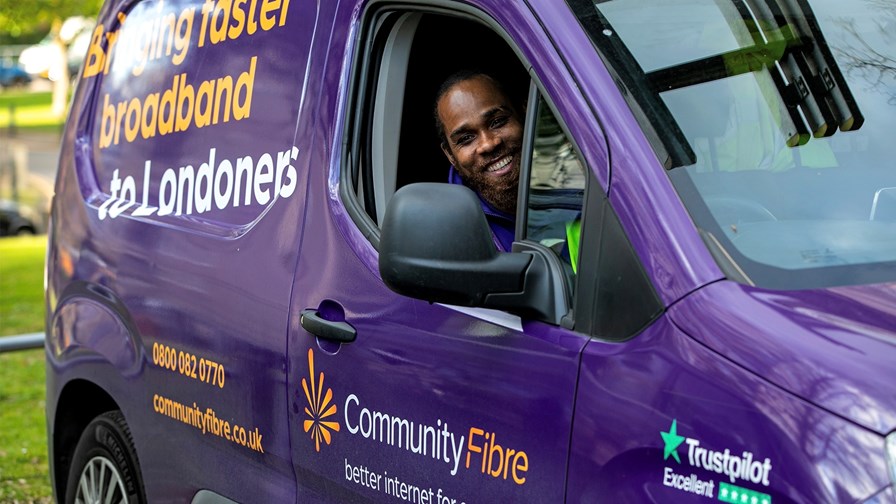 Community Fibre, which was recently cited as having the top broadband speeds in the UK capital by independent speed test specialist Ookla, already passes 675,000 premises with its fibre access infrastructure, making it the third-largest fibre altnet in the UK after CityFibre and Hyperoptic, and is aiming to increase that number to 2.2 million by the end of 2024. Its original rollout target was 1 million, so the operator clearly sees an opportunity to build a very strong position in the UK capital and, clearly, the investment community thinks it can achieve its goals.

The new funding comprises £685m in “committed” credit lines from unnamed lenders plus a further £300m through a potential expansion of those credit lines.

Community Fibre, which boasts well-known telco industry figure Olaf Swantee as its chairman and former Virgin Mobile, Three UK and Lebara executive Graeme Oxby as its CEO, appears to be playing the only sensible game in town when it comes to fibre broadband rollouts – achieving scale and attracting customers as quickly as possible with truly high-speed and affordable services: Community Fibre’s 1 Gbit/s service is currently available for just £25 per month. It has long been recognised by many in the broadband sector that there is a major advantage to being the first to have fibre in the ground in any market, hence why there is now such a rush to build out fibre access infrastructure in the UK – network builders that are second or third to pass any premises will be at a major disadvantage.

It has the added benefit of building in the major market (London) that the UK’s largest altnet, CityFibre, chose not to target in its extensive nationwide rollout so, while Community Fibre does have BT’s quasi-autonomous access unit Openreach to contend with, it isn’t also having to compete with the ISPs that use CityFibre’s wholesale network, though it does have strong competition from the likes of Hyperoptic and Giganet.

Signing up customers, though, is still a tough task: Earlier this year Community Fibre was reported by research house Point Topic to have built its paying customer base to around 56,000, though this will no doubt have increased since then.

But while signing up revenue-generating customers is important, getting the fibre network built out is of paramount importance as the network infrastructure itself holds great value in an increasingly digital economy, something the operators and their financial backers know only too well. And that’s important because when the focus of UK FTTH investment turns from building out networks to consolidating infrastructure assets to gain further scale (as it almost certainly will – the sector can’t support all the 100-plus altnets that currently exist in the UK), those operators that have fibre in the ground will be the ones either acquiring or being acquired, and those will little physical infrastructure will likely wither on the fibre broadband vine.

In the meantime, and ahead of the expected wave of consolidation, hundreds of millions of pounds are being thrown at the UK’s FTTH altnets, and Community Fibre isn’t the only one to have attracted new funding in recent weeks. Spring Fibre raised £155m in September, Tiger Infrastructure Partners took control of Rural Broadband Solutions with an investment of £75m, and Wessex Internet announced a “major equity investment” from the Core Infrastructure team at investment house abrdn.

But such deals may soon dry up, not just because the market has now reached saturation point (and there are few virgin territories left to target) but also because the cost of capital is now increasing. That the UK broadband sector is entering a new phase was highlighted in a recent report from the Internet Services Providers’ Association (ISPA), which is worth checking out if trends in this market are of interest.