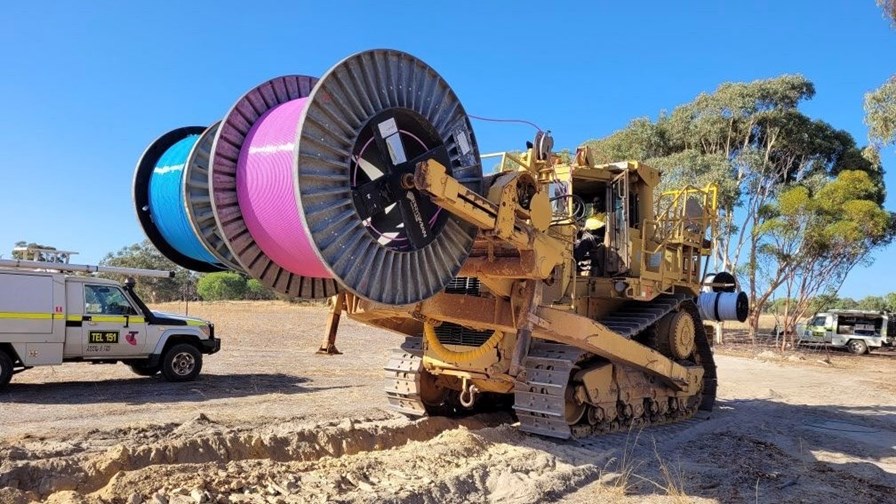 The developments were shared in updates from Dean Jones, the design and construction executive for Telstra InfraCo, a unit created in 2018 to focus on infrastructure projects, including the deployment of a fibre optic network which currently spans across more than 250,000km.

He noted the telco is collaborating with “two highly regarded construction partners” to help it build key parts of the fibre network – local infrastructure company Ventia and Fulton Hogan, which is based in neighbouring New Zealand.

Jones explained Telstra has decided to rely on local partners that are familiar with the “unique environmental conditions” in Australia that present challenges in deploying and maintaining “complicated networks like this one that other parts of the world don’t need to deal with”.

Australia’s landscape has led to “unique” challenges for Telstra as it aims to deploy a dual cable network on each fibre route, where the first cable will serve as “an express (inter-city) direct fibre network between capital cities, designed for our customers seeking point-to-point dark fibre over long distances”, while the second one is needed to deliver connectivity to regional locations and centres via break out and access points.

To roll out the fibre, Telstra is using specific machinery such as new “dual plough” tractors (see picture above) that can lay the dual cables at the same time in various terrains.

Jones noted the cables it deploys will deliver “ultra-high capacity, low-latency fibre with whopping transmission rates of 650Gbit/s (over six times today’s common rate of 100Gbit/s)”. When it comes to transmission between capital cities, they can provide “an even more impressive express connectivity” of up to 55Tbit/s per fibre pair capacity (over six times today’s typical capacity of 8.8Tbit/s), according to the Telstra InfraCo’s design and construction head. The fibre being used was designed and manufactured in Sydney by cable vendor specialist Prysmian “to be resilient to harsh Australian conditions.”

In February, the Australian operator unveiled plans to invest between AUS$1.4bn-1.6bn (currently equal to between US$963m and US$1.1bn) into two telco infrastructure projects. One is focused on building “state-of-the-art” inter-city dual fibre paths of up to 20,000 new route kilometres in addition to Telstra’s existing fibre network, and the other one envisions deploying and managing ground infrastructure and a fibre network for satellite communications company Viasat. You can find out more about these plans in Telstra’s note to the Australian Securities Exchange here.

The fibre network plan is part of Telstra’s T25 strategy, which aims to achieve “profitable growth and value” by enhancing the access and scale of its infrastructure in the next five years: That strategy will be presided over by the operator’s new CEO, Vicki Brady, who takes over from Andy Penn in the coming weeks.

Recently, Telstra announced it has secured Microsoft to be “an anchor tenant” on its ultra-fast intercity fibre network, while the operator will use the tech giant’s Azure platform as its preferred public cloud partner – see Telstra commits to the public cloud with Microsoft Azure.

In recent years, talk on fibre network rollouts in Australia has been mainly focused on the nbn (National Broadband Network), a controversial Australian government project to run a shared national fixed access infrastructure connecting homes and business premises. According to an investment plan unveiled in September 2020, the latest upgrade to the nbn infrastructure will enable ultra-fast broadband connectivity at speeds up to 1 Gbit/s at a cost of AUS$4.5bn (US$3bn): The upgrade to such speeds, which usually result in greater data usage by homes and businesses, will make Telstra’s investments in its regional and long-distance fibre infrastructure ever more important and relevant.

And where do the other main telco players in Australia stand in terms of fibre? Optus says it has deployed fibre lines across more than 48,000km in Australia and delivers a home internet service using the nbn. The third main mobile operator, Vodafone Australia, also offers nbn plans.