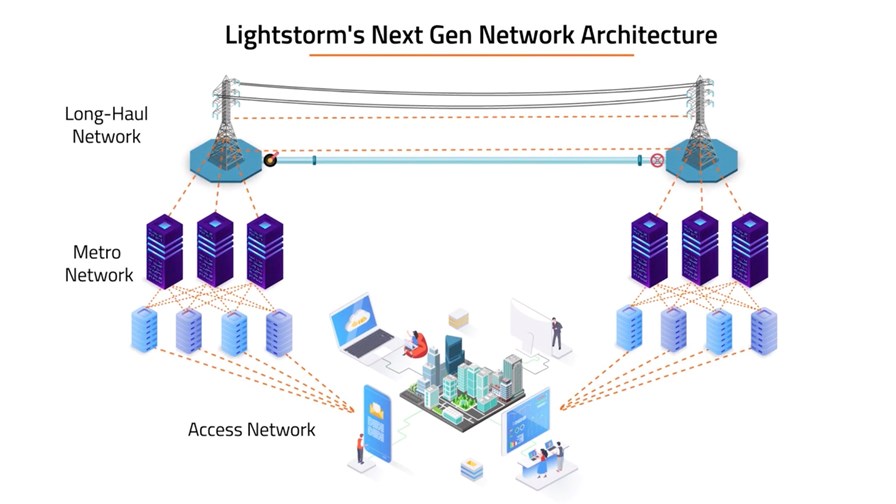 Lightstorm Telecom is on a mission to break down the networking barriers to India’s digital growth by not only building a new countrywide, software-defined wholesale optical transport network but also by revamping the way in which India connects with the international networks that carry Internet traffic around the world.

The company has just announced a deal to land the TEAS (Trans Europe Asia System) – a wholesale submarine and terrestrial network being built by Cinturion Corp. that will connect India, the Middle East and Europe via diverse routes – in India via its “carrier neutral and open CLS [cable landing station],” a move that will change the dynamics and economics of international connectivity for the India market, according to Lightstorm’s CEO Amajit Gupta.

He says that the Internet in India, as well as in other markets such as Indonesia and Thailand, is “blocked” because the connectivity between India and the rest of the world is via cable landing stations owned by Indian telcos that charge large fees just to gain access and get out of the facilities.

“So we’re aiming to get parity with the advanced Western markets with a cable landing station that stands on its own operating costs and doesn’t build in any inefficiencies or lock-ins with respect to backhaul, rights of access charges and so on. We are announcing a string of open cable landing stations in places such as Mumbai, Chennai.... and working with the big submarine players on content and the cables to find a way to remove these inefficiencies and hopefully make some money at the same time. This should play out over the next 12 months,” says Gupta, who has previously worked at Juniper Networks and Alcatel-Lucent (now Nokia).

To support that move, Lightstorm recently struck a partnership with international interconnection platform operator DE-CIX to provide global reach for its customers in India.

While these cable landing stations will be ‘open’ in nature, Gupta will be hoping that any companies wishing to connect to the subsea cables will do so via the Lightstorm Telecom data transport network, dubbed SmartNet, that the company has been building for the past couple of years with $300 million of backing from I Squared Capital, the investment company that is also funding network operator EXA Infrastructure and Asian data centre operator Big Data Exchange (BDx).

That network comprises 15,000 kilometres of fibre that runs between major economic hubs across India and connects to multi-tenant data centres (75 by the end of this year), with the fibre running overground along the country’s power grid infrastructure, an approach that “changes the economics of building a fibre network,” says the CEO, because there has been no digging and the physical routes already exist.

In terms of technology, Lightstorm has deployed optical networking technology from Ciena, digital operations software from Nokia and business support and ERP systems from Oracle, with the supporting nodes based inside data centres of power utility stations, which “rarely fail” from a power supply perspective.

Gupta claims the network is much more advanced and efficient than the existing transport networks in India and is already carrying traffic from the hypercalers – “the usual names... Facebook, Amazon, Microsoft” – and there is “huge demand coming our way, which confirms our thesis that a good quality network, even at a premium, is something which these markets need.”

And Lightstorm isn’t limiting that approach, of building a new generation data transport infrastructure in a market underserved by long-distance networks, to India. The CEO says work is about to start on building a similar transport network in Indonesia, with an open, carrier-neutral cable landing station planned for the capital Jakarta, and “our aspiration is to build connectivity right through South-East Asia... Bangladesh, Thailand, Myanmar, Philippines, Vietnam,” as well as India and Indonesia. “The overall thesis is that the next billion Internet consumers are from this market, and the market has been crying out for some good quality differentiated [data network connectivity]” to interconnect data centres and economic hubs, states Gupta.

I Squared Capital is the “near 100%” owner of the India operation and “about 75%” of the Indonesia rollout. Normally the investment firm would buy its way into a market by snapping up existing assets but in India and the other target markets there were no quality assets to acquire – “they didn’t exist, even if you wanted to buy,” says the CEO. Hence the greenfield approach of building from scratch.

Lightstorm also plans to use those networks and the supporting, cloud-based software to transition from a “bulk wholesale to bulk enterprise... to replicate our network as a service, on demand, and we’re building that stack out as I speak and hope to be able to deploy it by the end of the year, to replicate network-as-a-service, which is beginning to mushroom in many markets including North America and Asia,” says Gupta.