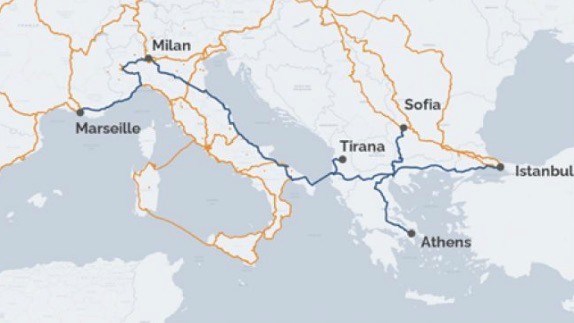 As concerns grow about the disruption of the supply of energy from Russia to Europe in the wake of the invasion of Ukraine, it is noteworthy that a new long-distance fibre-optic network route connecting France with Turkey is to be lit. EXA Infrastructure and gas transporter Trans Adriatic Pipeline have formed a joint venture (JV) that will leverage the fibre-optic cables that, presciently, TAP had already deployed alongside the 878 kilometre-long pipe. The JV will create the only direct connection between South-East and Western Europe and will provide high levels of redundancy over existing routes, all of which are multi-stage.

EXA Infrastructure describes itself as “the largest dedicated digital infrastructure platform connecting Europe and North America.” It’s a new entity having been formed only in September last year (as TelecomTV reported at the time) when the infrastructure business of GTT (formerly Global Telecom and Technology) was rescued from bankruptcy protection in the US when it was acquired by the Miami-based private equity firm I Squared Capital in a US$2.15 billion deal. On buyout, the business was renamed EXA Infrastructure.

It is headquartered in London in the UK, owns 112,000 kilometres of fibre network across 32 countries, and connects 300 cities. The company’s submarine routes include three transatlantic cables, and the company claims one of the lowest latency links between Europe and North America.

The addition of the new route across Europe is just a part of a set wide-ranging investments which, EXA says, will total up to €340 million in the first year of its existence as a standalone company (€190 million already planned, up to €150 million more to be committed before September), with much more to come

Meanwhile, Trans Adriatic Pipeline has been an independent transmission system operator since late 2020. TAP transports natural gas from the immense Shah Deniz field in the Azerbaijani sector of the Caspian Sea pipeline, connects it with Anatolian Pipeline at the Greek-Turkish border, then crosses Northern Greece, Albania and the Adriatic Sea before coming ashore in Southern Italy to connect to the Italian natural gas network. Under the terms of the JV agreement, EXA will have full access to the total length of TAP’s fibre network and assets which are entirely separate from its gas transmission business. The new system will be operational in the first quarter of next year.  Given the energy cut-offs and throttling that the Russian state is imposing on various countries, it is heartening to note that Bulgaria will get 33 per cent of its total gas demand via TAP as the transporter plays a significant role in boosting Europe’s energy security and supply diversification.

For more than two decades, a robust, high-speed, low-latency fibre-optic comms link between south-east and western Europe has been conspicuous by its absence from the infrastructure map. Now the new fibre optic route, which will consist of 36 pairs of very high-capacity ITU-T specified G652D single mode fibres that have been in common use in all networks for more than 30 years and which are backwards compatible and provide lower loss transmission on long-distance routes than other variants, will fill the gap and provide a direct link from Marseille to Istanbul and to EXA’s owned network infrastructure, with branches connecting to Athens in Greece, Sofia in Bulgaria and Tirana in Albania.

TeleGeography, the respected telecoms market research and consulting house, forecasts that international capacity requirements for Italy, Bulgaria, Turkey, Greece and Albania will increase nine-fold between this year and 2030.

EXA has some very ambitious plans for the future and wants to be “undisputed leader in the European digital infrastructure market, with the broadest geographical coverage across the continent and transatlantic routes.” To help achieve that end, its network build and optimisation programme will focus primarily on routes in the Mediterranean region of southern and eastern Europe to leverage the opportunities the region will bring given the ever-increasing demand for bandwidth on the part of hyperscale network users, large enterprises, telcos and DSPs.

Then, beyond the joint venture with TAP, EXA will work on a new 640-kilometre cable route between London and Amsterdam that will include the deployment of a new cable across the North Sea. Elsewhere it will upgrade infrastructure in Belgium and Germany to create the shortest and most technologically up-to-date path between London and Frankfurt, which is the traffic route with the highest demand across all Europe. Also planned is a new 1,000-kilometre cable route between Paris and Marseille to meet the intense demand created by new sub-sea cables landing in Marseille and to provide triple-diversity into major data centre and cable landing station clusters.

Furthermore, to meet ever-higher traffic demands on connections between data centre clusters in Paris, Frankfurt, Amsterdam and Brussels, 1,400 kilometres of cable will be upgraded with the latest specification Corning Ultra G.652D fibre. And that’s not all: Between later this summer and for the next three years, EXA will develop two cable landing station facilities and associated backhaul networks: This will comprise 800 kilometres of new network and 1,600 kilometres of upgraded routes to support new subsea cables scheduled to be built from Italy over the course of 2023, 2024 and 2025.

Further afield, the company is to invest in more than 700 kilometres of long-haul and metropolitan cable deployments on the Iberian peninsula to create greater capacity and diversity between the main submarine cable landing stations on the Atlantic and Mediterranean coasts, and also serve the hyperscale data centre campuses and new carrier-neutral data centres that are emerging across the region.

Beyond the Mediterranean and Adriatic, EXA will, this year, extend its reach to expand into further 30 carrier-neutral data centres and cable landing stations across Europe and Canada, with more planned for 2023. The company is also promising to commit to new links and upgrades in the northern Balkans, the Czech Republic, Poland and Slovakia, which is where the remaining €150 million of its first-year investments will be targetted.

Like the man almost said, “If you build it, they will come.”