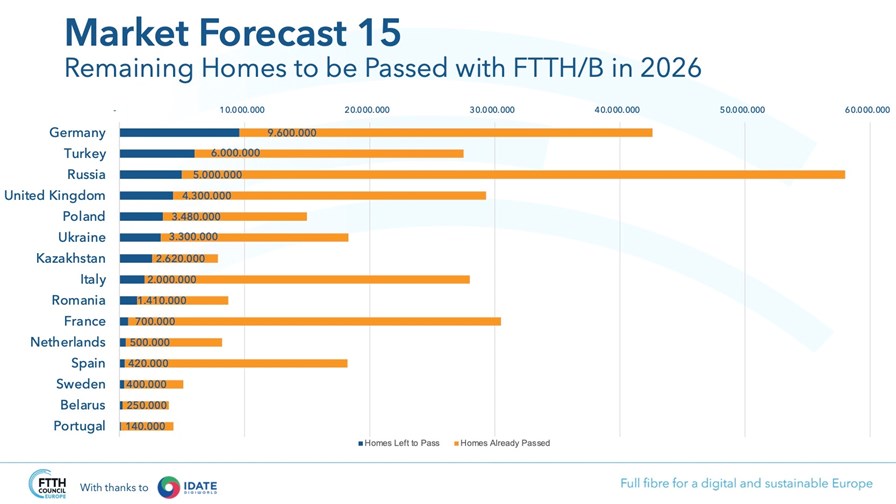 The ongoing accelerated investments in fibre broadband access network infrastructure across the European region are set to pay off during the next five years with the number of FTTH/B subscribers expected to double by 2026 to 197 million, according to a new report issued by the FTTH Council Europe based on data and forecasts from research house IDATE.

According to IDATE there will be 99 million households in the region (39 countries) with a fibre broadband connection at the end of this year, either directly via a fibre-to-the-home (FTTH) line or as part of a fibre-connected multi-dwelling building (FTTB), up from 81.9 million at the end of September 2020. (See Altnet rollouts drive Europe’s FTTH/B boom.)

That number is set to increase to 197 million by 2026, according to the forecast.

They key drivers behind the growth are well understood, including the work-from-home trend, greater public and private capital investment in fibre network infrastructure and improving micro-trenching techniques and cable designs.

And it’s noticeable from the forecast numbers that some of the major markets that have been notable laggards up to now in terms of fibre deployments – Germany, Italy and the UK in particular – are set to experience dramatic increases in FTTH/B subscriber numbers during the coming five years, which of course is encouraging for the networking industry and for the economic welfare of those countries too.

Despite the expected advances in those three major nations, they will still lag way behind the likes of France and Spain in terms of fibre broadband uptake and homes passed: In 2026, while France is expected to have only about 700,000 households out of reach of a FTTH/B connection, Germany is still expected to have almost 10 million (see chart above).

The FTTH Council/IDATE forecast also highlights some barriers to FTTH/B availability and adoption, including the emergence of fixed wireless access (in the 60 GHz spectrum band) as a Gigabit service alternative, ongoing investments in DOCSIS technologies by cable operators, ongoing ‘red tape’ issues, and the lack of availability of a skilled workforce to build out new fibre networks, a challenge that is set to become tougher during the coming year or so.

And, of course, there’s always the need for regulators and policy-makers to help overcome some of the challenges, though there appears to be a greater understanding these days of the long-term value of encouraging fibre infrastructure rollouts.

“There is still a massive growth potential in terms of connectivity in many EU countries, but overall deployment is progressing at a rapid pace,” noted Vincent Garnier, Director General of the FTTH Council Europe. “However, even with the infrastructure in place, the FTTH Council Europe considers that there is still a long way to go to reach a fully digitised society. We strongly believe that to embrace the next digital decade and shape Europe’s digital transformation by 2030, take-up is the next challenge, and we call on policy-makers to take the necessary measures for end-users to benefit from the world of new possibilities offered by full-fibre connectivity,” he added.

The FTTH Council Europe also issued a report focus on fibre deployments in rural areas, which found, not surprisingly, that fibre penetration in rural areas is way below the average: This is an important area of focus for the Council and one to be applauded – as Eric Festraets, the Council’s President, noted in an announcement issued today, “The FTTH Council Europe believes that rural areas should benefit from the same services as urban areas and therefore public funds should help bridging this digital divide where private financing is not possible due to the lack of business case.”

You can find the forecast and rural coverage reports, which are free to download, at this link.